Damn, the low end and the high end are so far apart.

Yes, poor Nintendo, treated so harshly by the media.  It's really not fair the way their games always get raked over the coals in reviews.

Seriously, why don't you show us what these games are that got shafted and why the games that won more awards didn't deserve the accolades they received?  That way you can prove you know what you're talking about.

A game needs to be evaluated by what it wants to do and how it does it, not on how you want it to be.

Unless you find it ok that anyone takes 50 points from all games that are cartooney because they like photorealism or vice-versa.

Your right, the problem is right now indie games get a pass.
They arnt judged nearly as harshly on graphics/sounds ect as AAA games.

It goes both ways, if you believe what you say.


1886 isnt a 3,5 score game though.
Also yes if someone reviewed that as a 3,5 that would be a troll or clickbait review as well imo.

Its short, and its repeative use of monsters..... but its not a bad game.

"Also maybe if you feel this strongly about scores, don’t rely on a review aggregator? Or don’t even look at them. Find a stable of reviewers who share your opinions and bias and score standards and only read their reviews."

I rather see this broken review system with metascore get fixed, than ignore it, and just look at stable reviewer ect.
Granted my only way to do anything is to express things on a forum like this.

Same crap with Days Gone, getting bad review scores because they found it offensive towards women or something.
That shouldnt be a real reason to take points off of a review.

"Never heard of Stevivor? You have now." 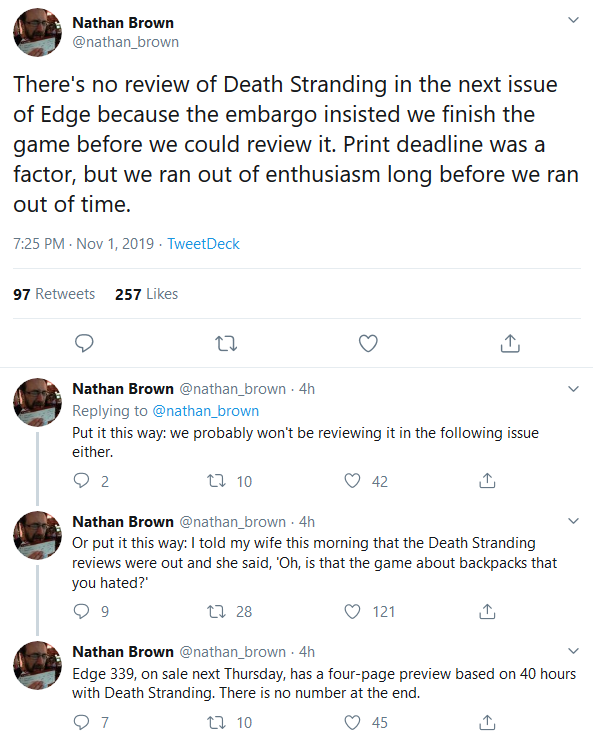 Oh, so he admits they're not even finishing games before they review them. What a bad excuse for 'journalism'. Too much soy in his life I guess..
Can believe he is serious about this. Pathetic.

I've heard of them. Their reviews never really stood out to me before as shitty or clickbait. Either they suddenly changed the quality of their reviews, or there's something genuinely offputting about Death Stranding.

He _literally_ is saying he did not write a review or assign a score, and instead is writing a 4 page preview of his impressions.

People are too sensitive about review scores.