Forums - Microsoft Discussion - The Fall of Xbox - Video by Videogamedunkey

Even what you are quoting there which is what he said on stage doesn't lay out the exact plan with the online games though since it's far bigger than just a bullet point, it's easy to include the bullet point of what he says which could be interpreted as some fluff piece that psn online is a great thing and multiplayer is a part of that but it's only when you specify that online play requires psn+ are you saying outright that you do not get access to online play without paying.

Regarding the non psn+ members getting to play single player games for free being a rock solid definition that without psn+ you don't get online play... that doesn't work considering that if you don't have psn+ you can still play fortnite/paladins and a myriad of other online games on the ps4 100% online without paying for psn+ ever. (any free game is free to play online on psn)

The first time that it was clearly stated that you need psn+ for online play is that footnote to the video. To suggest that every bullet point on that list is only available to those with psn+ would suggest that without psn+ you cannot access any of the discounted games which appear in the psn store which of course is not correct as many games get reduced on the store but some titles receive additional reductions with psn+

Not gonna go in depth about how the footnote also "doesn't lay out the exact plan with the online games though since it's far bigger than just a footnote" or that it contradicts things like how you can still play games like Fortnite online for free. Because I think that conversation won't go anywhere. Things like how certain exceptions like Final Fantasy 14 requiring a separate subscription shouldn't be expected to take up space in their presentation.

But rather, I remember that we were discussing the info from the presentation here on VGC. I don't recall there being any doubt about PS4 online being behind a paywall. And the first article that came up when I looked it up looks like this: 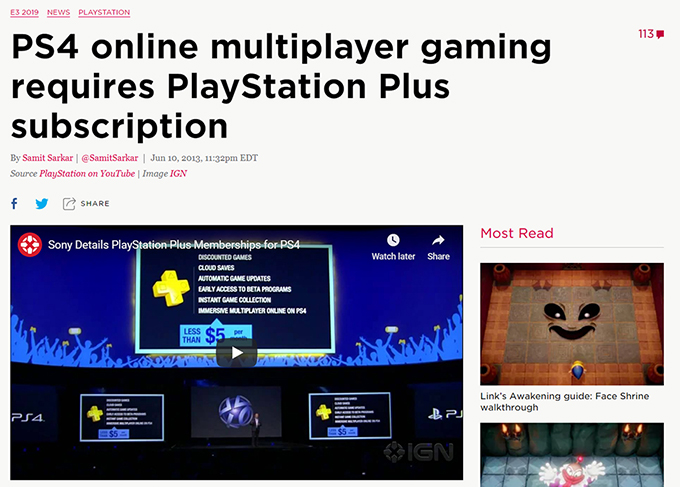 You said "it's easy to include the bullet point of what he says which could be interpreted as some fluff piece that psn online is a great thing and multiplayer is a part of that".
But I disagree there.

On stage he specifically said "For less than 5 dollars a month, members will get..." and then mentioned each bullet point, one by one.
So obviously, non-members will not get these things. That's pretty straight forward. If someone thinks otherwise, then I don't know what to tell you.
If any membership anywhere tells you what members get access to, you wouldn't assume you'll get those things without a membership.

And every bulllet point on the list that we already knew of from before all required a PS Plus membership. So the idea that they would mix in something that doesn't require it would make even less sense, even if he hadn't specified that members get these things.
Not to mention it would be an inconceivable marketing mistake to unnecessarily cause confusion about a free feature that their closest competitor charges money for, by advertising a free feature among features you pay for.

So if anyone was confused, that's primarily on them imo.
And then on top of that, he also said "PS4 gamers that aren't PS Plus members will be able to enjoy the single player games for free." As if it wasn't already obvious enough. I don't see why anyone would reach a different conclusion.

Though to your point, they're not crystal clear about the negatives in their messaging. But to call that "nuts", rather than standard PR, and to suggest that the video you linked was the only relevant source of this information, and not even mention the presentation, is misleading imo.

Would you also say it's nuts that Nintendo didn't specify that a subscription was 'required' for online play in their reveal video?

They said it's "included with your membership", much like Sony did in their press conference, which according to what you said "could be interpreted as some fluff piece that Nintendo online is a great thing and Online play and Online multiplayer is a part of that".

But I don't think so. It's standard PR to omit negative connotations when they're not necessary, and it should be clear to most people without it.
As I recall, there was no confusion about online play being locked behind a paywall here either. I don't get the impression that they were hiding this in some fine print somewhere else. But rather that they were presenting a negative in a 'positive' way instead.

Rather than using negative terms that highlight that you're losing something you used to have for free, they're just saying "here's what you get".
That's super basic PR for marketing.
That online play would be behind a paywall was openly presented.

But.... non members do get access to those. There are special discounts which are psn+ exclusive yes, but every sale with the exception of those on psn+ which are open to non members.

And again immersive online on ps4 can be played without the fee depending on the game.

That first bullet point alone torpedo's the fact slide in suggesting those things are not available to non members as the slide suggests that possibly better sales are available to psn+ subscribers, but the same could be said of psn+ online, such as free members on non dedicated servers like battlefield did for people who didn't pay the fee.

Fuck it, devils advocate and say that the slide clearly states that without psn+ you do not get online, why is the footnote in that video? what relevance does the "online play on ps4 requires psn+ subscription" to the video being shown of how to share disc based games on ps4?

How can you say it's falling when it's doing better than ever before... Comparing it to the competition and proving it's inferior doesn't make Xbox a failure just not a console war winner.... Xbox is also more than a console today and MS is making good money on it... I'd be curious to see a true net profit comparaison between everything Xbox at MS and everything PS at Sony... Pretty sure the lead wouldn't be as wide.... But even if it was XB is still doing better than ever before how can that be a fall... Gamers and gamers critics should stop trying to do financial analysis they just suck at them....

You really think Xbox is doing better now than it was doing at the height of the 360? Really? Is there any evidence for that?

Thanks for the reply. I think that's pretty much what I expected to hear. Halo is able to single-handedly keep a large number of people playing on Xbox, and that's pretty amazing. I have not played a Halo game since Halo 2, but I haven't been a big FPS guy since the days of Goldeneye, and in my teen years, Battlefield 1942 and Battlefield 2.

Someday I'd really love to play the newer Halo games.

I don't think I know... The Xbox brand is more profitable today than it was before and it's been pretty much like this since OGXB... What height of the 360? it was plagued by the RROD don't have the numbers on hand but I'm not even sure it got profitable then... Xbox is profitable today and is growing (talking about the Xbox brand as whole)

Well if you do get some evidence later let me know, but I, and I assume most people, don't believe this at all.

I also disagree about the 360. I'm sure it was profitable. Xbox Live Gold would certainly be a huge help there.

Finally someone with a bit of common sense. Too many people in here believe its all about who's selling more rather than if a company is doing better than they have previously or doing well. Too much is based off numbers rather than dollars.

360 lost MS billions but it was not the worse last gen, the PS3 lost even more.

X1 isn't in that same situation.

Its pretty obvious the X1 is doing better or well and that's based off the X1 hasn't done what the 360 did by putting Xbox in billions of debt. The 360 cost MS $3b however its success would be via there subscription model which MS will not tell us how much they profited by Gold Live members. But if we do some maths, lets say 10m Gold members paying $50 a year for 5 years = $2.5b now we know the 360 didn't have always 10m subs but I believe it rose to about 30m in 1 year and the service went on for longer than just 5 years for the 360 era... anyway I am going too far into it. Lets say its ALOT of money they were making on the side. It is also proven how good the service was to MS which is why MS is focusing on even more digital services this gen and only pushing it further next gen with a Streaming service.

The X1 hasn't put MS in debt not like the 360 did, and its subs are still quite good and with the inclusion of GamePass taking in monthly dollars its quite obviously the X1 is doing well from a business stand point. Yes its not as good as the PS4 this gen, however the X1 isn't in the boat where MS wants to remove it from there business model. If anything MS want the Xbox more and more now than they did with the 360.