Forums - Gaming Discussion - Obscure games you love to bits, and why you love them

Title really says it all, what games do you absolutely adore that are not widely known/talked about, and what makes you love them so much?

Zero Escape series. It's the quintessence of storytelling in the VG medium in my eyes. Harboring such themes of surrealism, philosophies and of course, humanism into a great mystery novel narrative complemented with let's just say amazing twist that would let you in shambles. Coupled with a magnificent OST and a decent voice-cast (in the 2nd game). It's nearly flawless in what it proposes.

Sadly, it never caught on in the grand scene like other series such as Ace Attorney (deserved), Steins Gate (Don't know much about this one) and Danganronpa (Derseved ? I don't like this series though).

It’s a shame it hasn’t gotten any real ports, outside of Xbox One backwards compatibility.

Oh man, so many. Okay so to start off, I'm a HUGE fan of the Two Worlds series, I know it's super shitty and just a clunky game all around, but man, from the lore, to the enemies, to the characters, it all just has this certain charm to me. Not to mention the soundtracks, especially the second game, are on freaking point. Honestly, I'm a huge fan of clunky open world games in general, absolutely loved Elex, the Risen games, especially the second. Other obscure games I enjoyed, Venetica, X Blades, Clive Barker's Jericho, Timeshift, Legendary, Devil's Third, White Knight Chronicles 1 and 2.

This is kind of old by now, but I must say Imperium Galactica 2.

Fly trough space, colonize starsystems.
Once in a starsystem switch to a sim cityesque colony building simulator.
Once you have a couple of colonies start building your starfleet and upgrade gear for it.
Then go on and eraticate other space traveling species.
Space battles are RTS with different classes of spaceships from smaller nimble ships for delivering a pay-load to big ass star destroyers releasing swarms of tiny fighters.

God I loved that game, it had it all except a FPS portion.

EDIT:// I just discovered that it is available from the mac appstore so this I will buy (yes my computer is a mac)

Not quite obscure, but Thumper doesn't get nearly as much love as it deserves. As a rhythm game it's just about as good as it gets, awesome music, awesome mechanics, awesome artstyle, everything about is amazing.

Both the first and the second game are available at GOG for whatever platforms you may own.

But yeah, both games are also part of my list.

I'll go even further back in time: Super Solver: Challenge of the Ancient Empires. We played that game at school (our teacher gave it to us) and trained our brains pretty well on thinking ahead and problem solving. It being educational and not kiddy simplistic in terms of gameplay and difficulty meant we had great fun with it.

Speaking of such old games, Battle Chess, anyone? Always funny to see how your figures got maimed to death from their opponents.

Also, the first Dune title. It's a genre mix pretty difficult to explain (it's simulation, adventure, RPG, economics and wargame rolled into one) and largely forgotten compared to it's successor. It's also pretty easy once you know what you're doing and how the Harkonnen will react. It's the first game I finished.

The whole Exile/Avernum series. It's getting remade yet again btw. Pretty deep RPGs - in every sense of the word.

Stars! is an 4x title, but with vastly different, abstract, fully customizable races. Despite being an obscure Windows 3.x game, it has an active community to this day.

Speaking of old games with an active community, One Must Fall. A beat-em up with giant robots on PC with a pretty deep fighting system for just using two buttons. Also has an extensive career mode where you upgrade your robot and pilot more and more, making the combats super-fast at the end.

There are still plenty more on my list (most titles I play actually fall into these), but I'll leave it at this for now

I wouldn't say I love it to bits, but Tom & Jerry in Fists of Furry is probably the most fun I've ever had with a fighting game. 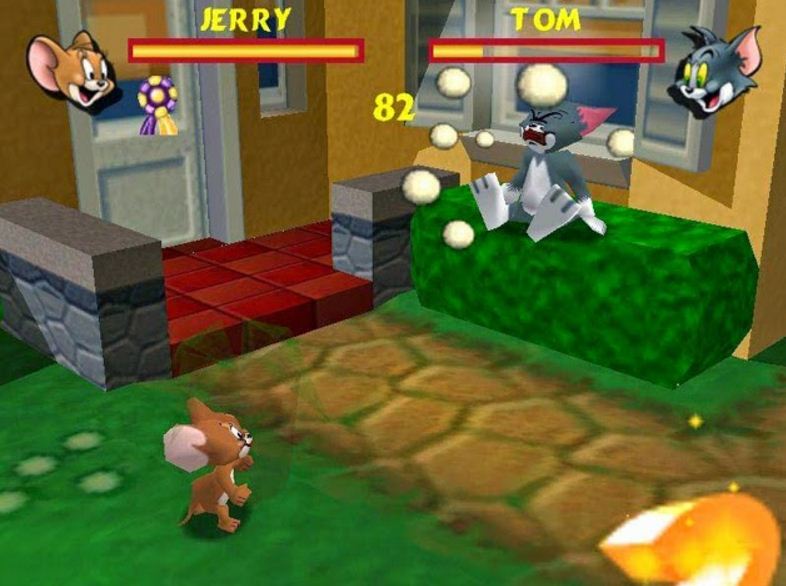 Speed Punks! Omg I had so much fun playing with my brother on this game as a kid. It's funny I owned Mario Kart and CTR at the time but for some reason I played Speed Punks a lot more even though it wasn't as good as those. I loved the characters, items and tracks, it was a really quirky game but it appealed to me. I bought it again about 3 years ago, it aged pretty badly but I still love it. I play it from time to time.

I think Pikmin is one of the best games ever made, does that count?