Do you think they will change Cid's personallity?

Tifa is wearing a sports bra because she's doing acrobatic moves. She's still quite big. Unless you don't know how breasts work. (Probably a good portion of the people complaining.)

So it was easy to not acknowledge those 'complaints'.

As for Cid, people may not remember, but the original FF7 used language that it censored, because they knew it was too bold for the game. 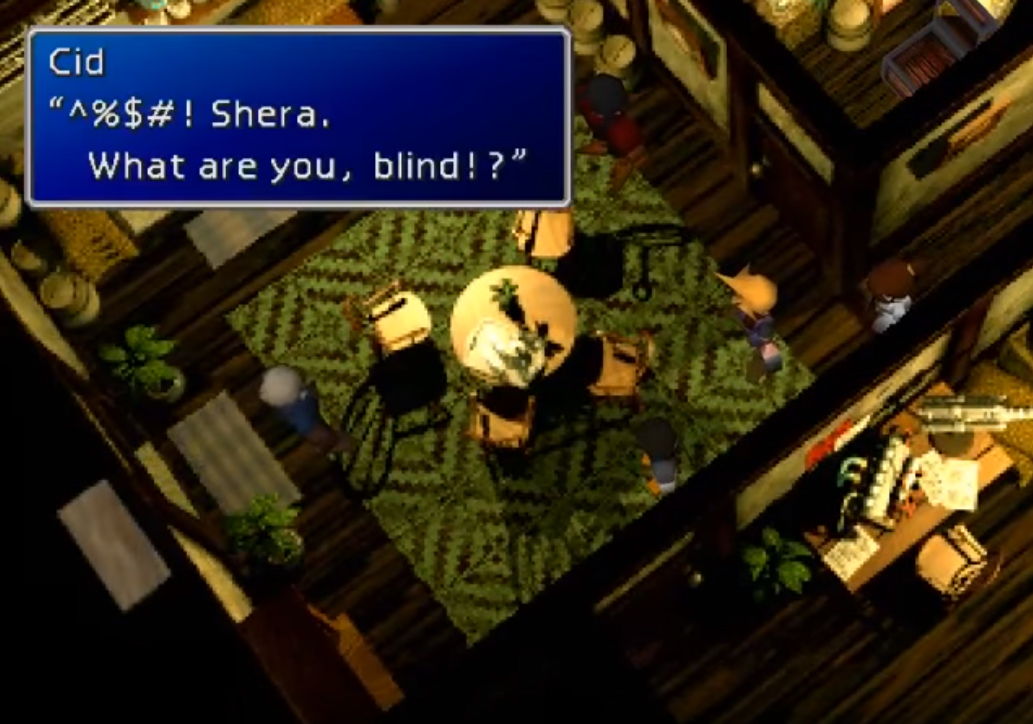 @AbbathTheGrim Do you have an example of a comment you think could change in the remake?

I'm sure that mods will fix it in the PC version.

Adaptation = Bastardization. For me, with most reboots/remakes nowdays, prettier visuals don't compensate for the multitude of changes to the original source material.

God, not to be that guy... but if they were to change anything in the remake it would have to be Cid's relationship with whatsherface because it's straight-up abuse, and it actually paints Cid as a very awful person and character. The game tries to justify the abuse but ... no. Abuse is abuse.

My thoughts, as well. They can't remove it completely or that would ruin his character.

Mit every Change is bad, and after 20 years they must Change some things, even if i'm a big Fan of turn-based jrpg's, i don't think that the most people would like it today

Give Tifa some juice back and everything will be fine.

I am not entirely sure what you mean with this question.

I am not sure if you mean: "I don't see what you could find in Cid's way of talking that is not translatable?"

I am not sure if you mean: "Yeah man, Cid says a lot of awful stuff in FF7, do you remember any other quote we can bring here to laugh at?"

I am not sure if you mean: "There is no way you can translate Cid's way of talking into the remake, especially when it is no longer in written form we now have voice overs and it will no longer be censored to encourage our worst possible mental translations."

I have no problems imagining anything from FFVII being adapted into the remake, but Cid's character is the Achilles heel to me. If I had to bet, the Cid we will see will not be the real Cid we got in FFVII. I fear he will be dumbed down to the point we won't recognize him, like a virtual cosplayer.

I remember him when I was little and acknowledged back then that he was awful, but I was content with the fact that his actions where honest and kind in spite of his language.

Playing a fantasy game like FFVII also made it completely understandable to me that Cid was something different, someone that simply didn't function in terms of personality, to what we expect and criticize in real life.

I always felt like Cid had some kind of condition, NOT EQUAL to the Tourette syndrome but something comparable where words =/= actions and intention.

At this point I swear to you I'd rather have them make Cid have this condition than what I fear they will do to him and his way of talking, regardless of what anyone thinks of the idea, I honestly don't give a fuck. I remember when I first heard about that condition, the first thing that came to my mind was FFVII's Cid.

But of course, the idea that Square is going to go for that character in this current climate and with a possible higher rating do to swearing, yeah, I know it's not gonna happen.

I was reading a post from usgamer who were present during the behind closed doors screening. They mentioned that the swearing in the game was actually much more frequent than the original. So there's still hope.

For some reason I'm very pessimistic about a PC port of the game anytime soon.