Forums - Gaming Discussion - Would you rather Bioware remain with EA for a lot of platforms, or be bought by a console maker and fixed, but on only one system

THIS IS NOT ABOUT IF IT IS POSSIBLE! I AM ASKING SPECIFICALLY FOR A THOUGHT EXPERIMENT! NO POSTS ABOUT 'impossible'.

Now that is said up front and clearly, I was thinking on this the other day.

Exclusivity is often seen as the devil by fans, but so is E.A in general. Whose the bigger devil I wonder?

So let's ask then: would you rather Bioware remain with E.A with all issues that ensue, but available on a variety of platforms.

Or would you rather see them bought by Sony, Microsoft, or Nintendo and have recovered, but have their games only be available on that system (and not on PC at all, or just through Microsoft if bought by them).

Which is worse to you?

Just stay multiplatform. EA is not entirely at fault for their issues.

Lets see how their next game fares. I say

"Would you rather Bioware stay with EA or..."

or...whatever or is, is my answer.

For what i want from Bioware i think Sony would probably be the best fit for them, since Sony don't mind making story-based singleplayer games.

I'm hoping Sony would buy them so we could get prequels to the Mass Effect games.

Seems most the talented people at Bioware left after EA took over.

I think EA should just turn all the IP's they own into an on-line Game themed casino. /s 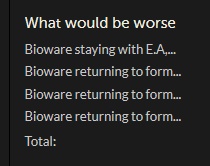 Based on their style of games I'd say Sony would be a good fit, but honestly I'm fine with them at EA, can't blame their bad games entirely on the publisher, a lot of key members seem to have left and joined other studios, they just need to hire more talent and get back in the groove of things

Bioware needs to give up on silly multiplayer online focus dreams, and return to the good old days of story + singleplayer focus rpgs.
Its what made known, what they did well.

I liked andromeda, so the only bad game so far is anthem, though I've not played it myself. If the option is either mediocrity with multiplat games or good exclusive games I'll always choose good games.