So, when will the Zelda BOTW sequel release? A lot of people seem to think Holiday 2020 is the date, I think it's going to be later then that. Holiday 2021 earliest imo, and that's my prediction. Make your predictions now, and when the time comes bumpity bump! 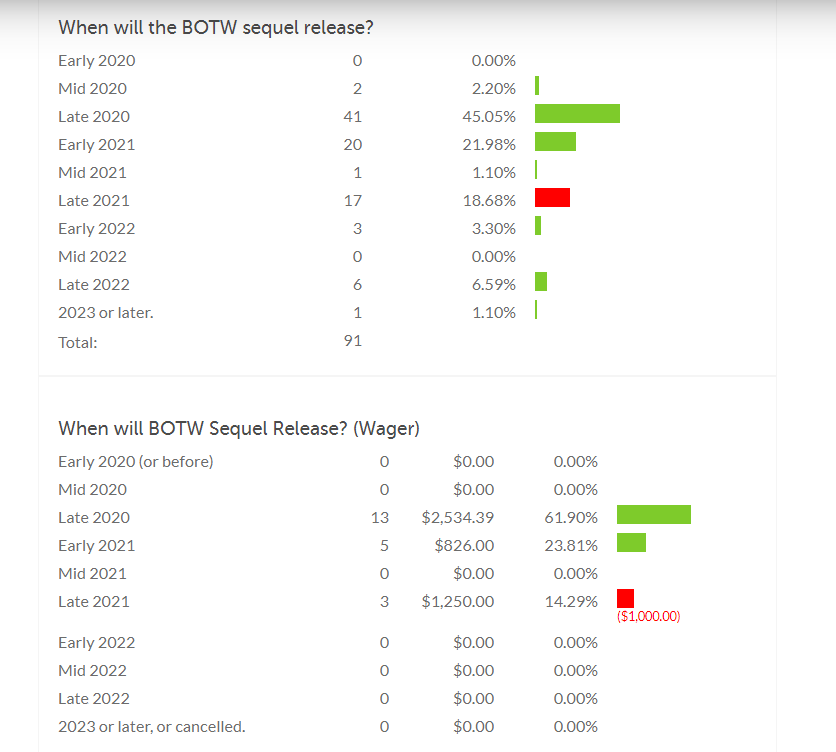 I voted late 2021. But, predicting Nintendo release dates is really just guessing. They sometimes announce stuff several years before release, and sometimes surprise us with big games coming soon. They also love to delay, delay, and delay again. So, I think the game will release sometime between today and the end of time.

Depends on if they want to tackle the arduous task of porting old Zelda characters into the new one.

They're re-using a lot of assets so the development cycle won't be insane. They also don't even have a title yet, though, so my guess is these dudes must be relatively early on in development. Late 2021.

I think at next year's E3 they'll announce it as 2021, but it'll be delayed to 2022 eventually because mainline Zelda games always get delayed. Maybe this one will be different because they're sticking with the BotW engine and style, but I'm not too sure

Yeah it is just guessing. Really it's about trying to guess from what they showed how far away it is. They don't have a name, but they at least showed something which makes the situation less dire than Metroid Prime 4, and have assets and an engine to already work with, which we saw in the video. Some people just saw a logo for Metroid and thought it'd come out in 2018, look how that turned out.

They're not going to rush out a sequel to a game that saw universal critical acclaim, they want to follow that game up with something very special, and they'll take the time to do it.

I want it to be holiday 2020. I also think Nintendo aims for that date at the moment, but I know full well that Zelda often gets delayed, so it could very well be March 2021 at the earliest. Still, I’m optistic, and vote holiday 2020.

I am going to say holidy 2020 because we do not have a huge game lined up for it yet and it would make sense. March 2021 is also not out of the question however for obvious reasons.

They probably will not announce it till next E3 as there is still a chance that they will not hit their mark if it needs more time, but I feel this is what they are aiming for.