Wanted to jot down my thoughts on the game because it's been going up and down as I've been playing.

It never looked like my type of game, presuming I wouldn't be too interested in the story. But because a friend of mine started playing it, and because I thought the turtle house looked impressive in one of the videos I've seen, I decided to give it a shot.

And during the first couple of hours or so, the game was pretty much what I expected, having seen some videos of the start of the game already.
At that point I considered that I may stop eventually, if it doesn't become more interesting to me. Not that it's a bad game. It's very well made. It's just I have a lot of other games I'd rather play instead, like finishing Persona 5, or playing Kingdom Hearts 3, Spiderman, Resident Evil 2, etc. So I kinda have to force myself to get through God of War, or I'll possibly never do it.

Then I got to the lake, where the world opens up, and I started having more fun doing side quests. I believe I did all of the ones available, including rescuing the dragon, before moving on with the story.
And then I was taken by surprise by something, and that's the world design. Even though I had seen the turtle, I didn't expect a whole world looking like this: 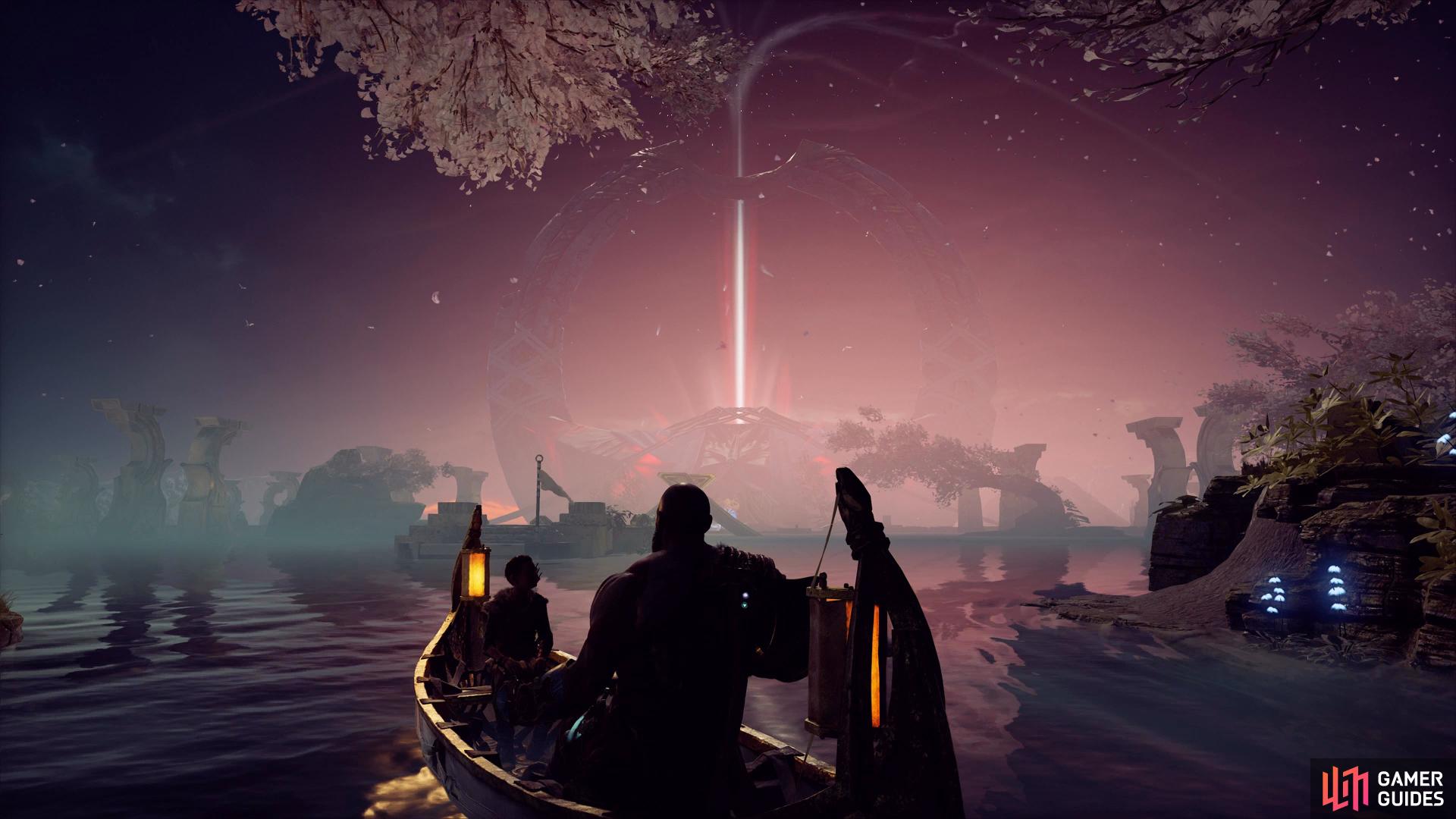 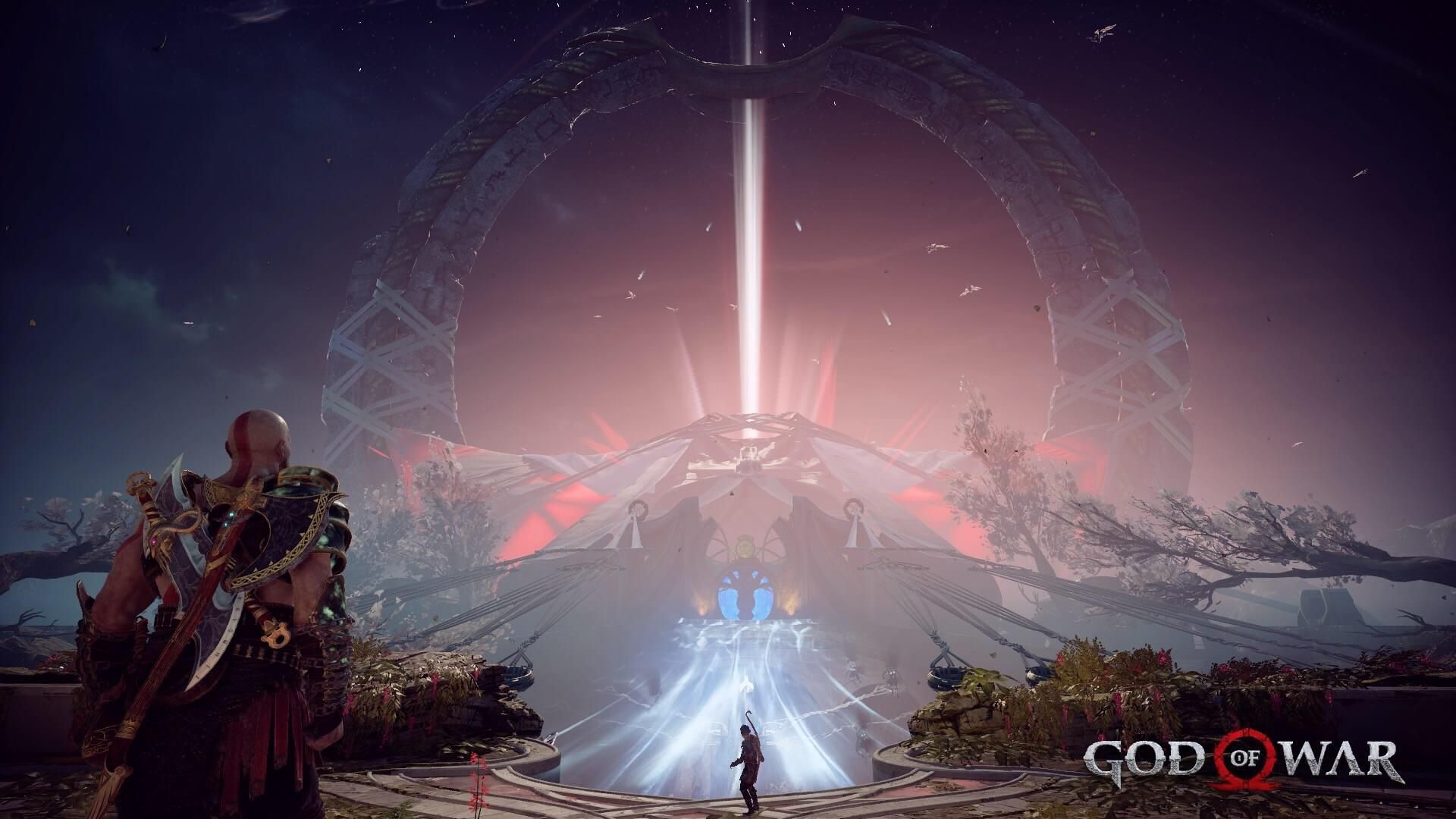 I enjoy the chit chat between the main characters. The main story however... so far I'm not invested in any of the characters enough to care much.

Today I tried playing again, and after lowering the water level in the lake I had access to new areas for more side quests.
The problem this time is that I didn't enjoy doing them. And I think that has to do with the rewards. I've noticed that these side quests tend to give me some materials to craft/upgrade gear, but never enough to actually be able to do it. Not for anything worthwhile really. I got a rare Tyr's wristband, but that's about it.

Can't really make anything Legendary that looks worthwhile, and nothing Epic, in spite of doing probably over a dozen of those side quests by now, and opening every puzzle chest so far. So I have no more motivation to do side quests. At least not now.

So that leaves the main story, going to Jotenheim. I hope I start getting invested in the story, because otherwise I'll either lower the difficulty to Easy and just rush through the main story, or I may possible put the game aside and play something else.
Even though combat is well made, and I don't find it boring, I also rarely find it interesting aside from fighting the giants, bosses, and the finishing moves. The purple level enemies that one shot you are not particularly fun either. I know I'll get the Blades of Chaos later, so maybe that'll be more fun.
I don't have an issue with the combat though. But if I had really enjoyed it, then maybe the side questing yesterday would have been more enjoyable as well.

How far into the game am I?

Gosh, it looks so gorgeous. I hope I get to play it someday.

Its a dynasty warriors in a pretty coat

My mood is pretty much always the same when I play, or at least I never notice it. But last time I played I got sleepy pretty quickly, so I only played for about one hour, and then had to turn it off. I'm pretty sure that impacted my enjoyment of the side quests as well.

Next time I play I think I'll try one more side quest and then go to Jotenheim and see how things are there, because I did like the puzzles for the level design in Alfheim more than I did with these recent side quests.

GOW visually was impressive from the start for me. The turtle house area I found a bit of a wow moment, and the Lake of Nine area a little more so, then World Tree, and then when I passed the pillars in Alfheim, I leaned forward on the couch and just stared. It's not the last impressive area you'll see.

Early in the game you don't get a lot of gear and hacksilver isn't as plentiful. Eventually you will get to a point where you will definitely notice it ramps up a bit, and it tends to pick up from there. I found buying gear wasn't all that useful early on anyway. Upgrading weapons and skills was more useful.

As you level up the purple enemies will become yellow then green if you wait long enough. Yellow makes for good fights and green is pretty easy.

You can go back to most area's when you finish the story, but there are a few area's you can't and there are some transition points from area to area that are blocked off as well. I tried to get everything on my first pass through and didn't miss much. I did miss a gold chest in Thamur's Corpse, which I couldn't go back and get after, but luckily once you finish the story you can go to a shop and purchase that item.

I've finished the main story. I'm not quite finished overall but fairly close. You're not even half way. A quarter, possibly, maybe not even that far. Hard to say exactly. If you're going to do everything then there's plenty more. The story no doubt get's better and deeper as you go, and if you know Norse mythology, it makes it even better.

I'm not even sure why you're still playing GoW when it's clear you don't want to.

Was my GotY, but whatever.

Hey man, finally getting updated on the best game of the gen so far =]

Don't worry to much about equipment, you'll have several tiers to work on if you want, or you can be a knucklehead like me and play 60-80% of the game without ever upgrading your armor in the hardest setting where you need 12 hits to kill anything and die with 1 hit of anything =p

You are about 40% into the game from memory.

That's nice to hear. I also liked the the teleportation room sequence, so I was under the impression that there would be more impressive looking areas and sequences like that.

Yeah, I am mostly saving my resources, because I can get by with what I have, and so that I can spend them on worthwhile things later.
Weapon upgrade seem tied to story progression though? At least the Leviathan Axe that requites a Frozen Flame every time, I think.

I'm not sure what upgrading skills does exactly though? For example I have a cooldown skill that heals my HP a bit. I can upgrade it, but the description does not suggest that it's healing capabilities increase if I do. Only the accompanying stats. So I didn't try that yet.

Hmm, didn't expect that. I'll keep that in mind going forward, but maybe I'll find a balance between story and side quests, rather than just doing every single optional thing possible as soon as it becomes available.
I have 9 out 9 Apples, so maybe I maxed out my HP through that mechanic already (unless there is more), but not feeling like I made meaningful progress through the side quests made them less interesting last few times I played. But things like saving the dragon was interesting. And I understand there are a few more as well.

Alright, that's about what I expected.

Because some times you discover good things when you persevere. Like how I went from not having fun, to having fun once I reached the Lake of Nine. And being impressed by Alfheim.