I feel like I've been hearing of this game for the longest time but haven't seen much of it to warrant it's near 8 year development time.

I wouldn't call it a scam because they probably invest almost all the money in the game development. It just seems too ambitious to ever get finished as a “normal“ game. Too much manpower for the less important stuff instead of finishing it first as decent game and improve it afterwards to something special.

People have been calling it a scam for a long time now.

Is it just me, or dude looks like an older, chubbier Elon Musk?

At least Tesla delivers real cars while they're burning investor money, though.

Two quote from that Forbes article: "Most of the people here helped to pay for the game’s development—on average, $200 each, although some backers have given thousands." and "$242 million has been contributed by about 1.1 million fans"

I really don't know how they got these numbers. Here are the real number from the RSI-page: 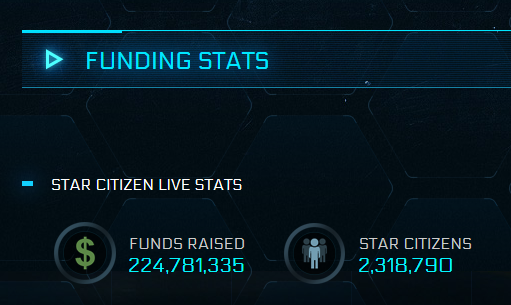 Saying it for awhile.

Don't ever treat video game journalism (Namely from Forbes) as attempting to do fact checking, honestly the game is improving constantly, which is more I can say about games releasing recently, that for some reason get to release glitch invested "finished" product.

People still pour money into this?

Wait, is it still not finished? How long have they taken already? How more do they need?