Worldwide total shipments for PlayStation 4 have reached 96.8 million, Sony announced in its financial results for the three months ended March 31, 2019.

A total of 2.6 million PlayStation 4s were shipped during the third quarter, which is up 0.1 million from the same period the previous fiscal year.

Here are a couple of additional statistics: 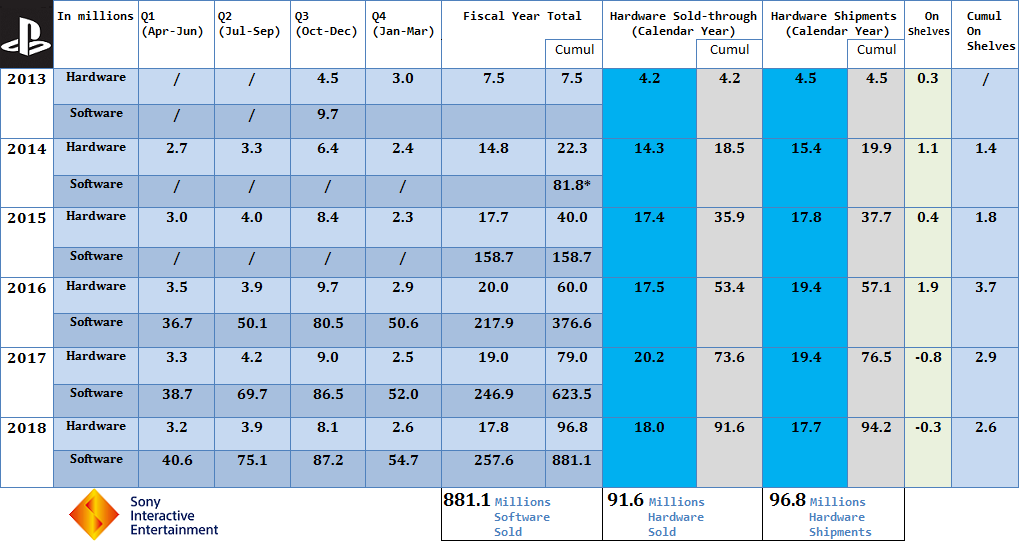 Very good sales for both HW and SW.

Hardware selling above the Sony forecast (17,8 instead of 17,5) that had already been raised from 16 million to 17,5 million.The console will probably reach 100 million shipped at some point this summer.

The most impressive thing for me, though, is the forecast for the next FY. A forecast of 16 million seem insane for a console that is heading into it's last 12-18 months, with a pretty soft drop YoY (17,8 to 16). For me that can only mean that maybe even 2 out of the 3 big games Sony has, probably TLOU2 and Death Stranding, will release in the next 12 months.

We won't know until they actually get there!

Factories will stop working before reaching 9 digits, so only 99,999,999 PS4 will be built

Great sales for my favorite console :)

Weird start to Sony's earnings press conference: they're boasting that PlayStation Now has 700,000 users across 19 countries. It's weird because normally they just start by going through their usual financial figures. Feel like a response to Stadia?

As I said before streaming and subscription services is a waste of time, Sony probably fudging the number too so 400k-500k is the real number.

What?, they shipped more this Q than last year and they expect 16M next year??? I did not expected that at all. Price cut/revison coming or what? 16M is a lot more than i expected....

PS4 is gonna be the next best selling home console, behinde the PS2 by the end of its life.

Beating the Wii and PS1 almost all but confirmed.

only 700k? I was expecting 2-3 Millions, 700k is very low. But considering the problems with streaming and the quality

I agree, 16M seems very high, I was expecting more like 13-14M even factoring in a pricecut. It's gonna be interesting to see what Sony is planning to do to reach that amount - it's already trailing by about a million behind last year.

I said a few days ago that i was expeting around 14'5M sold to consumers in 2019 due to performance. So when i said that i meant that i expected around 14M shipped for the year. If Sony is expecting 16M units to ship that could mean the console can sell 16-17M to consumers during this next 12 months. That's.......impressive. So if Sony is not bluffing, the only way i think they can do it, is if PS4 has a revision or a price cut. And if indeed PS4 is already 113M shipped by March 2020, PS4 should be near 120M by the time PS5 launches in November 2020.

PS4 is almost a guarantee now that is going to end selling 125-130M lifetime, and who knows, if PS4 gets to live alongside PS5 during a year or two more, maybe it can reach those numbers you said.

PS4 has being an astonishing success...., commercially and financially. It's going to be the fastest home console to reach 100M units sold too.