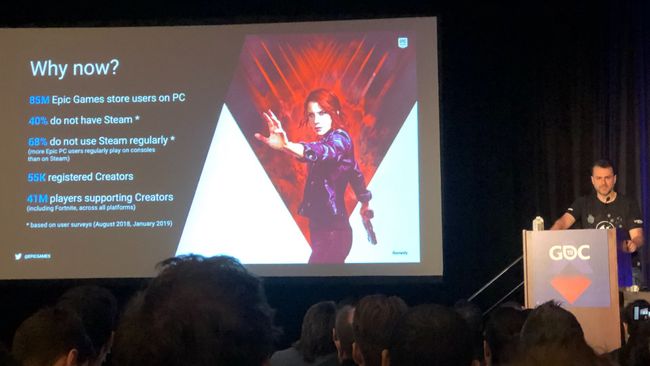 Epic Games said during a GDC presentation today that there are now 85 million registered users of the Epic Games Store on PC—and, according to user surveys from August 2018 and January 2019, 40 percent of them report not having Steam.

Although Valve has not recently reported the total number of Steam accounts registered, in January, the company reported 90 million active Steam users.

According to the survey Epic performed, 68 percent of Epic store users don't use Steam "regularly," a figure that seems awfully high given Steam's decade-plus dominance of the platform. But the multiplatform Fortnite is the x-factor here: The slide also said that "more Epic PC users regularly play on consoles than on Steam."

There are also roughly 55,000 registered Creators on the Epic Games Store, and 41 million players supporting them across all games, including Fortnite, and all platforms.

I've always felt Valve's numbers are misleading. I would like more hard stats from them. I don't think Valve is as nearly as popular as the big 3 in North America. Instead I think Steam gets a lot of users in places like Russia where consoles are not readily available.

Also, I personally don't use Steam. If I do get a PC game it has always been from gog.com. Given the rise of the Epic Games store, I might consider them as well. So you can count me as the type of person who might use the Epic Games store but not Steam.

Megaton. Very succesful launch for the store. And the fact they're bringing in new players not on steam is very positive too.

Not suprising considering that you need that thing to play Fortnite on PC.
So most of that are kids that are younger than Steam itself.

You should actually take advantage of all the stores on PC. No need to do a "boycott" simply cause you dont like a certain company. There's bundles, free giveaways, and sales that feature on pretty much every store (minus Bethesda).

This new generation will be all grown up in 10 years. It's very important to Epic they make their store the go to place for them.

Why dont you think PC gaming is as big as console gaming in North America?

I don't dislike Valve.  I dislike Steam.  Why should I use a service that I dislike?

1) Before Steam came along we had numbers for both PC and Console sales.  PC games never sold like console games did.  The big money was always in console gaming.  This was also in an era when PC gaming had more exclusives (and better exclusives IMO) than it does now.

2) Valve never gives us all of their data.  This in itself is telling.  The XB1 is not selling well and Microsoft doesn't give us data about the XB1.  I suspect Valve is the same way.  If the data was actually good, then the company would give it to us regularly.

60% of Fornite kids and basic newcomers who don't really care to open their eyes to everything and anything around them.