I've drifted away from it because horror games in general don't appeal to me any more. Just not a fan of the tension any more. I liked all of the ones I've played however. RE and RE2 on PS1, RE: Code Veronica on the Dreamcast, and RE4 on the Gamecube. RE 5 looked good, and RE 6 looks pretty iffy. I DO want to play RE 7 some day, especially in VR, and the RE 2 Remake as well, but there's a good chance I never will. My favorite is RE 4. The one most worthy of a remake is RE 3.

Totally forgot I played the RE1 remake on GC, as well as RE0. I never finished RE0 though. :(

I think the essential ones are REmake 1 (because it was the starting point of the series and the genre), REmake 2, and RE4.
All of which you've played. Though I'd recommend you try New Game + on RE4 once you're done, as replayability in that game was fun thanks to that mode where you get to keep all your weapons and upgrades. You'll also have Ada's story to play through.

Resident Evil 4 is my favorite in the series, and I even think it's one of the best games ever made.

I think RE6 was terrible though, and would not recommend that one at all.
RE5 however is just ok in single player, and really fun in co-op with a friend. So if you have a friend to play co-op with through the campaign, I recommend trying that. If not then it may still be worth checking out, if you're determined to play more RE games.

Code Veronica was a good one, but it sports the classic gameplay and controls, so that might be a bit jarring to get into in 2019.
At least REmake 1 gives you options to play without tank controls. None of which I noticed while playing, but they're there.

I've never played Zero, so I can't comment on that one.
I'm about halfway through Revelations 2, so I can't give a full review, but it is focused more on survival and horror, similar to RE2 in that the monsters are resilient and ammo is scarce.
I am enjoying it though.
RE3 was good, but like you said, I also expect it to be remade so you may as well wait for that.

The RE2 remake is excellent. Current playing it, really awesome. I would like to see a remake of RE; Code Veronica, as it seems that not many people played it.

Not a fan of RE7. The game itself is fabulous, but I don´t like the first person view. It did not feel like RE to me.

I would recommend you to try Revelations, which has a good balance of horror, anxiety and action.

Id say my favorite RE game would be RE4 (Gamecube), followed by RE2 (N64) and REvelations (3DS).  Fore some reason, I just couldn't get into RE0, but that was years ago.  Maybe it's time to re-visit that one.

I am in the same boat as OP. I've played 4 and 7 all the way through, and really enjoyed them. I played a couple hours of 5 and hated it, especially trying to micromanage my AI companion.

Was thinking about getting the 2 REMake, but thought maybe I should play the original first. 20 bucks on PSN. Wish it was a little cheaper, but might give it a shot.

You've played all the good ones already OP, just wait for the inevitable RE3 Remake.

If you really want to know, Code Veronica, though certainly more playable than titles to follow (and the one I'd like to receive the remake treatment after 3), is the game that started all the convoluted braindead BS that culminated with this:

One might argue RE4 is partly that, but the silliness is integral part of its charm, and it stands on a very hard to achieve balance. The RE4 HD project is almost done, and it looks amazing. I'm waiting for it to play the game again.

And the RE0 villain is a sentient leech dressed like a JRPG character.

Yeah there's very little retreading old ground/backtracking in RE4, though there is some. And perhaps because of that, I remember them distinctly. When you re-vist the first village, it's striking how it's now pitch black because the sun has set. Making it harder to see the ganados, and the traps they laid out.
The tradeoff for less backtracking is that we get more unique areas instead, which is also good. But as Ada you'll get to explore many of the same areas, and some new ones.

Speaking of which, there will be two new modes with Ada unlocked once you finish the game. Only one of them is a story campaign. Then one I'm referring to is called Separate Ways. And it was not on the Gamecube version, but added as a bonus to PS2 since it came out later.

Also, a little tip.
Many enemies can be suplexed. You perform it by first shooting them on the lower half of their leg, and then the button prompt should show up as they are kneeling.
It's not only a very powerful move that often crushes their skulls, preventing plagas from sprouting from their heads, but it's also very satisfying to do.
These hooded enemies in the castle can all be suplexed. 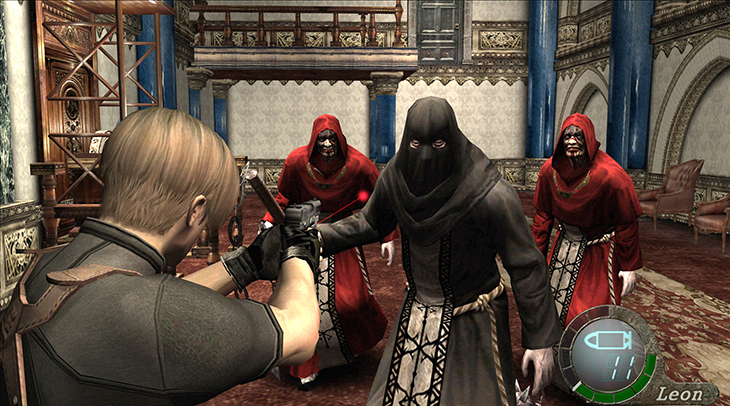 Also, the Red9 handgun becomes as powerful as a shotgun during its final (exclusive) upgrade.
Very fun to use in New Game+ as it causes heads to explode very frequently.

With the direction they took REmake 2, I think the next remakes will be thoroughly enjoyable both for veteran players and newcomers alike.
It had enough similarities for nostalgia, but also a lot of new elements or changes that made it feel like a brand new experience as well.
I hope that game goes on to sell a lot more because they really put a lot of thought and effort into it.

If they remake 3, then I'd expect Code Veronica to be next, because RE4 is in much less need of a remake as it still holds up very well to this day, so they might as well save that for when technology is even better. I'm not sure why Code Veronica wasn't designated a number, but I read that Resident Evil 3 - Nemesis was not supposed to have one either, but that they changed their minds when production for what would become RE4 was delayed, and turned into Devil May Cry.