Forums - Nintendo Discussion - What would you say was the peak of the DS & 3DS respectively?

With the 3DS now seemingly done on new releases, I think it's time we look back at the two platforms in the DS line and judge what their best years were.

Starting with the original Nintendo DS. While it was slow out of the gate during its launch, it quickly made a name for itself thanks to a lineup of great and unique titles from Nintendo and third party developers. In terms of quantity and quality from a first party perspective, what would you say is the peak years of the DS? For me, I'd say the DS was really fantastic from around late 2005, all the way up though 2007. So much variety and quality content came out for the system during this time, and it was the period where third parties really began taking notice of what the DS could do for gaming. And Nintendo was on fire during this time, seemingly pumping out at least 2 games every month for it, all of wildly varying genres. 2008-2010 were good years too, but I'd say they were a bit weaker as third parties really stole the show these years while Nintendo kind of cooled down with their release slate as they focused more on supporting the Wii.

For its successor, the Nintendo 3DS, I'd say it's best years were 2013, 2015, and oddly enough 2017. 2013 and 2015 had a ton of great games, and much like the DS' peak, it felt like Nintendo was putting at least something out for it each month, be it a AAA release, Port of a console game, or quirky eShop exclusive. Considering the launch of the Nintendo Switch, 2017 was better than it had any right to be for the 3DS. A ton of games released during the year, even with Nintendo trying to get the Switch off the ground. Granted 2017 was only as good as it was for the 3DS because it was a basically a back-up plan in case the Switch were to fail, but for a console that was nearing the finish line, it was amazing so much came out for it at all.

DS was obviously 2005. Just look at all these great games...

Dual Strike, Animal Crossing, Mario Kart, and Dawn of Sorrow were some of the best games on the system IMO.

Best Fire Emblem game ever, best Animal Crossing, best 2D Zelda ever, and Poke'mon finally went 3D. Oh, and Etrian Odysey 4 is one of the best RPGs I've ever played.

I didn't live the DS days to know.

Man I have to replay Dawn of Sorrow and Portrait of Ruin...

That's the year I got most of my games for it:

They were all killer games. Especially MKDS. It had the best track line up of any Mario Kart game.

Damn... I’m not even going to try disagreeing with this post. For me, the highlight of DS was the Phoenix Wright trilogy, it began in 05, but that was also the year of Mario Kart AND Animal Crossing. Can you beat that?

Mario Kart 7 was clearly the highlight game for 3DS, but ALSO Animal Crossing, AND an Ace Attorney game.

Despite these being highlight years, there was enough strong stuff during the other years too. For me DS was strong right until the month before the 3DS launch, I was still buying stuff for it. I felt 3DS began strong and kind of fell apart in the later years... that’s just me. I haven’t bought a thing for it since before the Switch launched.

The OG DS is harder to pin down, especially since so many of use didn't really have a DS for much of its run. The DS was also the last Nintendo system to really not have software droughts, which means it was much more consistent in its output and the years were overall closer in quality. 2005 is the year the DS really showed what it could do, so I'd say then, but it's not so easy. 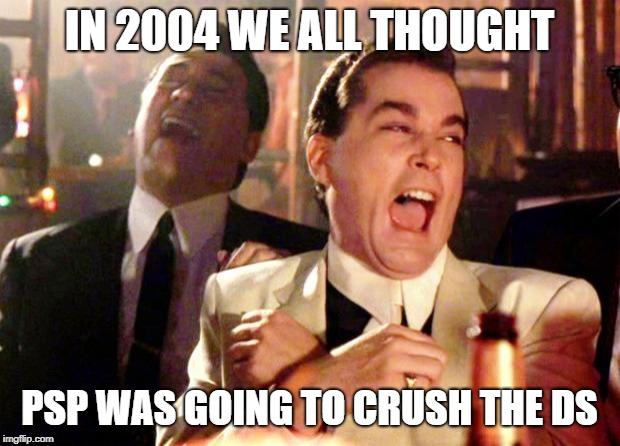 I'd say the DS is the first Nintendo system to never have a drought. The only other two consoles that never seemed to be short on software releases were the Wii and Switch, which both came after.

I can't speak for the NES, because hardware was not widely available for long periods of time, and by the time it got launched there was generally already something hundreds of games available.
SNES was filled with droughts, particularly in the pre-DKC era. It was kind of "here's a bunch of launch games, then we're gonna give you a few years of nothing... Oh! but here's Secret of Mana! Perhaps you should by a Sega in the meantime while we get our shit together!"
N64 and Gamecube were even worse. They got so bad that there were months where NO games were released... and I don't mean "damn, only seeing Marvel, Disney, and toy license games this month!" I mean, NO GAMES; you could literally keep track of every single release and have an opinion on it the trickle was so low in those generations.
DS and Wii had fairly solid release schedules, the Wii got shaky in its final year, but by that point it had a substantial library anyway, so it didn't feel like a drought. So Wii and DS at this point are two consoles without droughts.
Can't exactly say the same about 3DS and Wii U, but 3DS is a weird one because it's difficult to determine when we can rightly cut that generation off: for the last few years it was living on re-release fumes and its catalogue.
The Switch, on the otherhand, hasn't really had a drought yet. Last year didn't have huge first party support, but every week I found anywhere between 2-8 new games that made me think "I'd love to give that one a whirl if I had the time for it." - Essentially, Switch has had so many games that I can't even keep track of all the games I want to play, let alone all the games period (cough! SNES-N64-Gamecube!)