It's not spin, its context. If I told you that some 14 year old kid beat one of the NBA's best players at one on one basketball, would you want to draft that kid when he got old enough? Now, what if I told you that the kid only beat him because the NBA player had a full leg cast at the time? It's still a fact that the kid beat him, but context changes everything.

The Wii and DS were not competing with the iPhone. The Wii was a completely different device. As for the DS we can just take a look at the following chart. 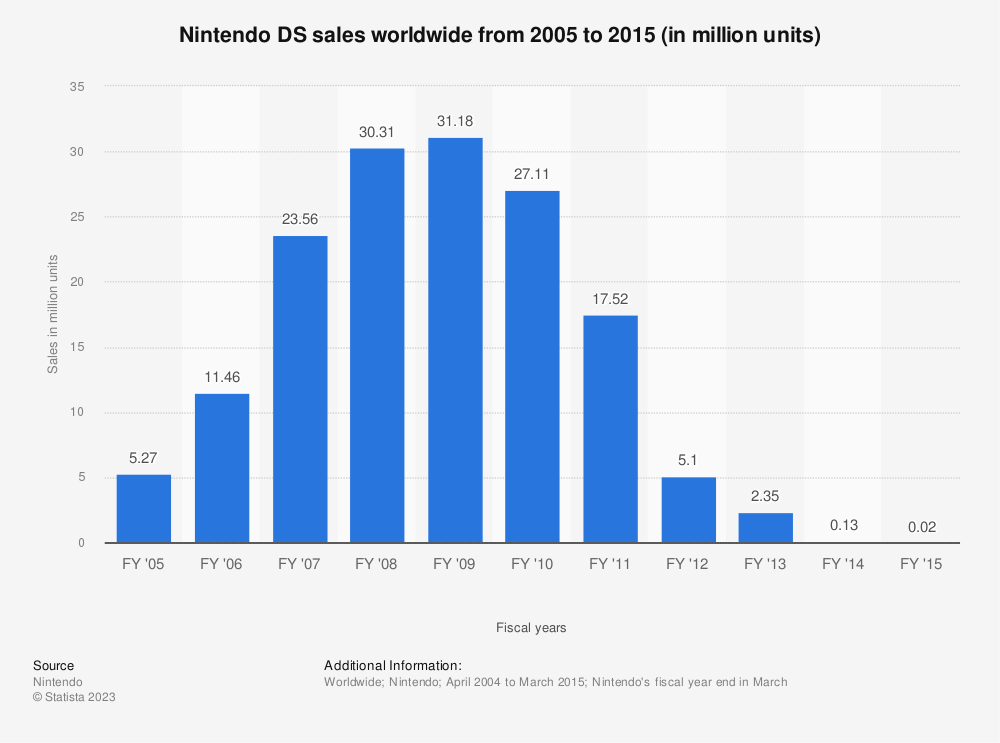 Remember iPhone launched in 2007. It doesn't look like it effected DS sales at all.

As far as the N64 selling more first party software, well of course it did. 3rd parties left Nintendo in droves for the PS1, and with less 3rd party games, to compete, sales of Nintendo developed games shot up.

I agree with the NES part. It was Nintendo most commercially successful system hands down.

This isnt really telling the full story. Yes, iPhone released in 2007 but it took a few years before it became the mass market device we know today. Here are yearly sales of iPhone.

There is no denying smartphones have affected handhelds & casual consoles. DS+Wii+PSP sold over 335 million units, 3DS+Wii U+Vita have sold under 105 million units. That's nearly a 70% drop.

Dunno if it was the peak software development, but the SNES era was the peak of my interest in the Nintendo platform. To this day I still buy SNES games to play on my Super Nt (a modded SNES just wasn't cutting it anymore).

That's entirely my point though. Smartphones weren't yet ubiquitous in 2007 to 2009.

As far as Vita/Wii-U goes those systems flopped for many reasons. Smartphones just happened to be one of them. I'm confident that if Nintendo had skipped the 3D effect and launched the 3DS as a 2DS XL model they would have hit 100 million. Remember the 3DS launched as a tiny little device costing $250. It didn't start to see real sales until the XL model came out. But yeah, smartphones would have kept the 3DS from ever reaching 150 million regardless of how Nintendo launched it.

its hard to say for sure since you would have to be speaking from a contextual standpoint. the SNES was a powerhouse in terms of the number of quality games you could find on it, and a significant number of those are from Nintendo. i would still give considerable credit to Switch though with the amount of man-hours of polish they have been giving their games. Splatoon 2 is still getting updates, Mario Kart 8 Deluxe is still an evergreen title 2 years later, BotW is just one of the best games they have ever made, etc.

Back in the early to mid 80's, the home console market had crashed.  The prevailing belief at the time was that people were ready for PCs to replace home consoles.  "Home consoles were just a fad", they said.  In reality the rise of the PC and the home market crash just happened at the same time.  It was a coincidence.  When the NES came out, it sold roughly twice in the US alone what the Atari 2600 sold.  At that point it became obvious that the consensus was in error.  The PC has many uses, while a console really only has one use (playing games).  The two are not really in competition.

People are making the same mistake this time around assuming that handhelds are competing with smartphones.  The only difference this time is we can benefit from the lessons of history.  But most "analysts" are choosing to ignore history.  So they make the same mistake again.  It is still a coincidence that one market grew while the other fell.  A smartphone has many uses, while a handheld console really only has one (playing games).  The two are not really in competition.