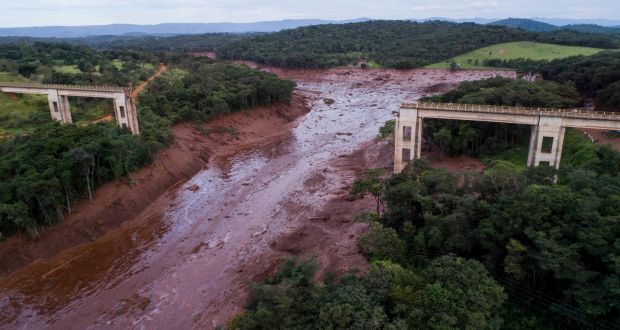 (BRUMADINHO, Brazil) — The death toll from the collapse of a dam holding back mine waste in southeastern Brazil rose to 34 on Saturday as searchers flying in helicopters and rescuers laboring in deep mud uncovered more bodies. More than 200 people were still missing and authorities expected the death toll to rise during a search made more challenging by intermittent rains.

Romeu Zema, the governor of the state of Minas Gerais, warned that those responsible “would be punished.”

Daily Folha de S.Paulo reported Saturday that the dam’s mining complex, owned and operated by Brazilian mining company Vale, was issued an expedited license to expand in December due to “decreased risk.”

Preservation groups in the area say the approval was unlawful.

In addition to the 34 bodies recovered as of Saturday afternoon, 23 people were hospitalized, said authorities with the Minas Gerais fire department. There had been some signs of hope earlier Saturday when authorities found 43 more people alive. Company officials also had said that 100 workers were accounted for. On Saturday, the company said in a statement that 251 workers were still missing.

Firefighters distributed to news outlets lists of people who had been rescued or accounted for. But there were still scores of families in the city desperately awaiting word on their loved ones.

For many, hope was fading to anguish.

Another dam administered by Vale and Australian mining company BHP Billiton collapsed in 2015 in the city of Mariana in Minas Gerais state, resulting in 19 deaths and forcing hundreds from their homes.

Considered the worst environmental disaster in Brazilian history, it left 250,000 people without drinking water and killed thousands of fish. An estimated 60 million cubic meters of waste flooded rivers and eventually flowed into the Atlantic Ocean.

Schvartsman said what happened Friday was “a human tragedy much larger than the tragedy of Mariana, but probably the environmental damage will be less.”

The sad thing is that both state governor and president were elected promissing to loose environmental restrictions and speed up licening processes. People vote against their own interests out of spite and misinformation.

Lives lost during natural disasters are no less important but there is something deeply disturbing about lives lost because of human oversight or, worse, greed. This is a tragedy.

Now everyone's demanding justice but when they vote for people that don't have any respect for environmental cause, they turn a blind eye