Take a closer look at the breathtaking beauty — and unrelenting savagery — of Oregon's High Desert after the pandemic that killed the world.

Traveling the abandoned highways of the Farewell Wilderness is deadly. You’ll pass through thick forests of ponderosa and pine (filled with wolves), venture into naturally formed lava tube caves (filled with Freakers), ride up steep trails to snow-covered peaks offering spectacular vistas (mind the Marauders — and Freakers — and cougars). Riding the broken roads through Days Gone offers landscapes that change quickly and dramatically, a living, breathing world — filled with things trying to kill you.

The breathtaking natural beauty of Oregon’s High Desert, scarred by ancient volcanic activity, shaped in modern times by a dubious history of mining and logging, has long been a recreational area for outdoor enthusiasts who love to hike, camp, fish and backpack. During the pandemic that killed the world, tens of thousands of survivors fled into the wilderness not realizing that it was no safer than the homes, cabins, truck stops, saw mills and small towns they left behind.

Freakers, drawn to mass graves dug throughout the Farewell Wilderness, were everywhere. Swarms of Freakers, Hordes of Freakers — all looking to feed. Throw in marauding groups of human enemies looking to rob and pillage everyone in their path, wildlife — infected or not — starving for food, and crazed cultists terrorizing anyone who won’t join them — and our love letter to the region begins to sounds more like a eulogy.

Today, in the first of a series of three videos, we offer you a look at the Farewell Wilderness, the setting for Days Gone, a unique landscape that is as beautiful as it is dangerous.

Head over to your favorite retailer and pre-order the game now. At launch you’ll receive a voucher to unlock for the Drifter Crossbow and upgrades for your drifter bike’s Nitrous, Gas Tank, and Shroud early in the game which will help you survive as you ride the broken road. As an added bonus, pre-order from PlayStation Store and you’ll receive a Days Gone Sawmill Dynamic Theme immediately after pre-ordering. 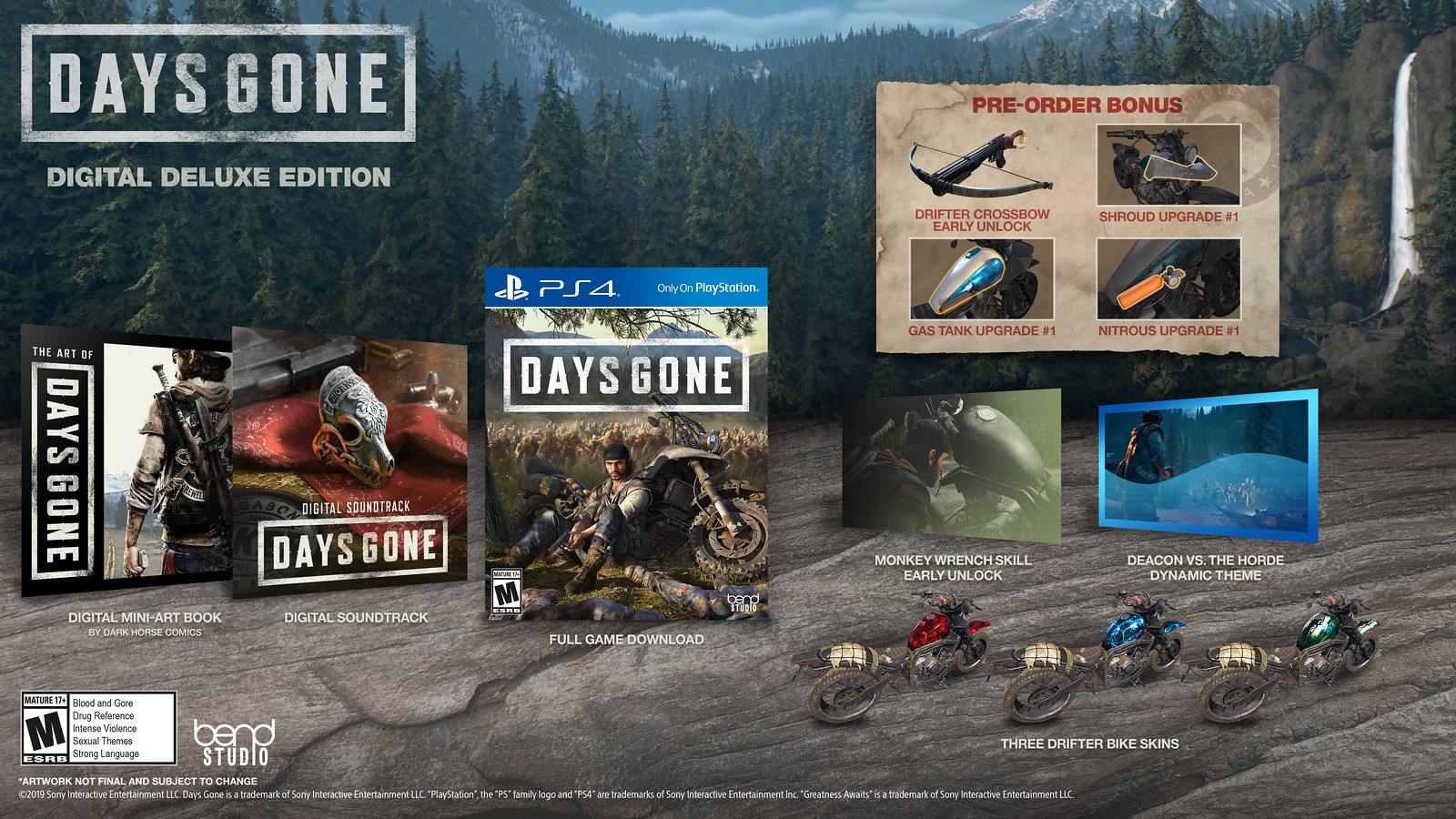 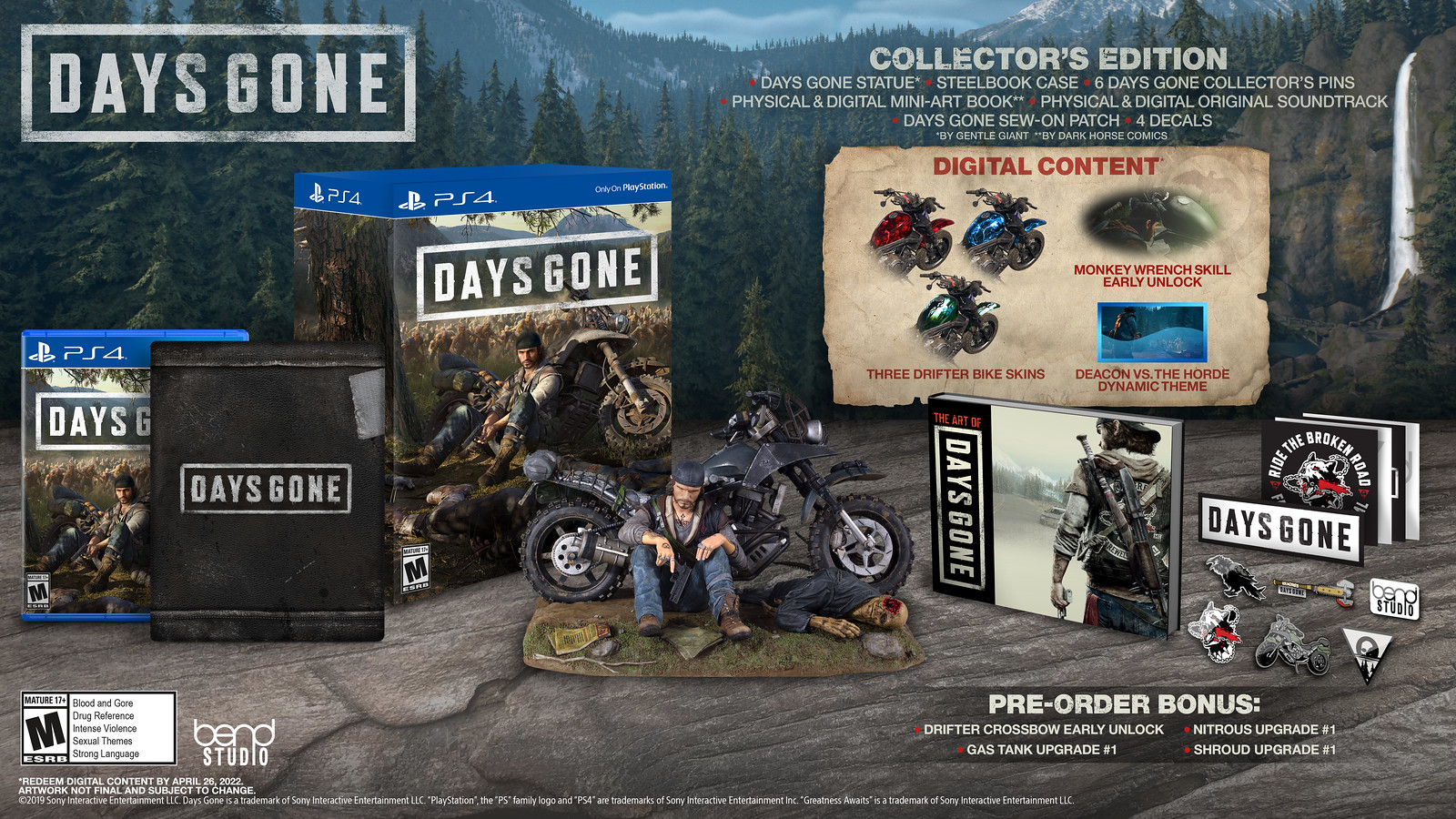 Excited for this! Seems like the framerate has improved massively as well :)

Possibly the best showing if the game so far.
Look forward to the other vids

Wow. That was short little video. Would have liked to have seen more. The tiny bit on display looked good at least.

Video was pretty good. Got me a bit more interested. Not sure if I’ll buy this, especially day 1, but we’ll see what the reviews show.

It really is. Hope it's the finalized and doesn't get changed.

So this comes in April..... which means dreams most likely gets the September slot.

Which in turn means we don't get TLOU2 or Death stranding in 2019.

Maybe its just my mind pandering to my own desires, but this lends itself nicely to my theory that TLOU and DS are both going to be launch (and cross gen) titles for a March PS5 release.

Game is looking great so far.