Still a few weeks left to go but as of Smash launch week it's sold over 100m Software for  the year.

Turns out this is retail LTD. It looks very unlikely it hits 100m retail on here. 60m currently but LTD now over 100m.

Issue is here that only in 2018. Switch will have around 100m+ sales in software. But in any case we will have update for sofware sales from Nintendo at end of month.

100m goal is for fiscal year, and VGCHZ numbers point at YTD, but Nintendo will easily pass that 100m goal, proably around 110m.

Sorry my bad its 60m retail for the year so far as of December 8th. Nintendo's goal includes digital and this doesn't. But the switch has crossed 100m LTD as we can see on their latest chart.

I don't think VGChartz gives a good full overall indication of Switch's total software sales (besides in a few weeks they'll no longer be keeping track in favour of Nintendo's official data right?)

Nintendo's numbers have software sales at 110.10 million as of September 31st 2018 with next quarters update coming at the end of this month. 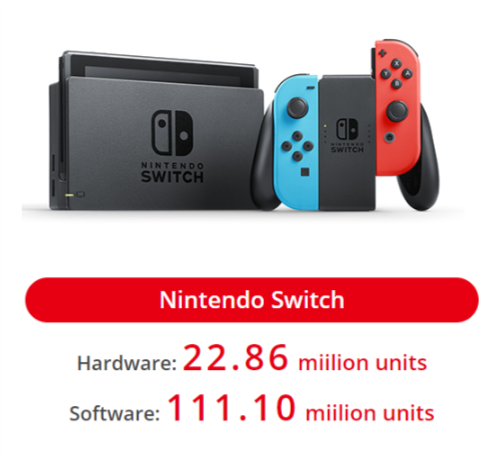 But that includes digital and sales from a ton of indies that have been doing good numbers. Vgchartz is tracking boxed copies sold at retail.

The same goes for other consoles like the ps4. If you included digital and indies sold it's number would be much higher then the 135m it's sold in 2018 as of December 8th.

A lot of those indie games are digital only titles and aren't included in Nintendo's data. The bigger and more expensive titles that do release with physical copies I would say have the same merit as any other game.

And yes no doubt PS4's would be larger too, I was just pointing out the data Nintendo readily provides a more accurate indication of software sales, as do have a goal of 100 million units of software this fiscal year (only digital of physical releases included).

The 60 million paints a picture of doubt that doesn't exist. That's really all I was trying to put out there.

Nintendo reporting sales of games only that have physical releases, so that means only digital releases (majority of Indie games) are not included in that number. And yes, next Nintendo update will show just how much off is VGChartz when comes to sales of Switch games.