Red Dead Redemption 2 is the highest rated current generation (PS4, Xbox One, Switch) game on Metacritic. What game/games (announced or games that you think will be announced in the future) do you think has the potential to surpass its Metacritic score?

In my opinion only two games have a decent chance of achieving this. Last of Us 2 and Cyberpunk 2077 (and GTA 6). Although Cyberpunk 2077 has to "conquer" the fact that not everyone is going to like its first person camera angle.

And in case if some answer Zelda (Breath of the Wild 2), I don't think that it will surpass RDR 2. If it's "only" similar and improved version of BotW, it will most likely score lower than 97. It would have to be as big of a game changer as BotW to score as well or better. It most likely can't improve much graphically (at least if it's released on this generation), and making as impactful gameplay changes as BotW is going to be really hard (feel free to give ideas what new they could do). And unless they decide to focus much more on story and characters, which is unlikely, it's not going to bring anything new to the table on that front.

But for example in Last of Us 2's case, its graphics are going to be a big improvement from the first game. It will have new story and characters, which is even bigger advantage in this case since it's a series that has heavy focus on story and characters. Its gameplay will most likely be similar compared to the first game, but based on the gameplay trailer the combat looked so spectacular that it was hard to believe that it was actual gameplay. And I don't think that anyone is expecting Last of Us to change its gameplay to full blown shooter or open-world, or implement lots of vehicle sections.

So what are your own game options/opinions about those arguments and games mentioned above?

I dont think any game will surpass RDR2 score this gen.
But if it will be surpassed, it will be one of the three following games, and nothing else:
- Super Mario Odyssey successor
- Breath of the Wild successor
- Cyberpunk 2077

I don't think anything will.

The things that potentially could are: Last of Us 2, Cyberpunk, Zelda, 3D Mario, Metroid Prime 4, Halo Infinite, Death Stranding?

Cyberpunk is the only game I can think of having a chance of hitting a 97.

only ones i can see doing it is a mario sequel,zelda sequel to BOTW, TLOU 2, other than those, i cant see anything on the horizon that stands a chance

Why do you think that GTA 6 (or Last of Us 2) can't surpass its score? I think that it will at least be really close. GTA IV and GTA V got 97-98. GTA 6 will most likely have by far the biggest budget and it's going to look spectacular, especially if it's released only on next gen consoles. And if they improve its story from GTA V, I think it has a good chance of surpassing RDR 2.

What about GTA 6? I think that either it or TLOU 2 has the best chance. But in my opinion only if it has much better story than GTA V and similar driving physics as GTA IV. In GTA V they sucked when you crashed.

The games that come to mind of reaching that score would be a new 3D Mario game, mainline Zelda title, GTA6 and TLoU2. If Nintendo manages to make the next Mario and Zelda game like Odyssey and BotW, I'm sure they'll also be excellent games that will score very well. Though I suppose the same can be said about GTA6 and TLoU2, haha. 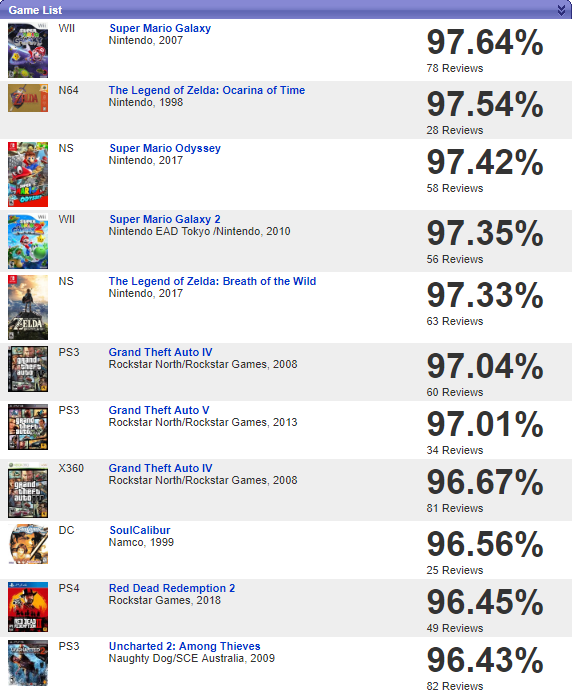 These earlier games surpass it. Other games after it will too.