Forums - Sony Discussion - Could a mod lock this thread please.

This is likely going to surprise quite a few people: 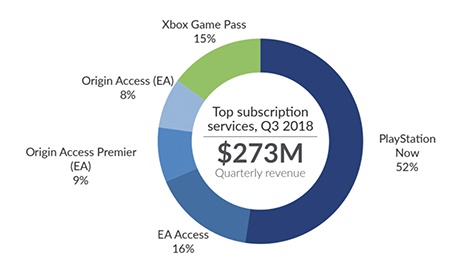 "PlayStation Now is, perhaps unsurprisingly, the dominant service by some margin, generate 52 per cent of venue. This is likely due to the sheer install base of the PlayStation 4, which stands at over 86m units sold since its November 2013 launch. Second place - by some way - is EA Access on Xbox One with a 16 per cent slice of the pie, while Xbox Game Pass claims 15 per cent of the sector's cash.""Though the subscription model clearly works for the video games space, it certainly raises questions over how we judge the success of individual games. For example, Microsoft has announced positive launches for Sea of Thieves, State of Decay 2 and Forza Horizon 4 with some impressive early player figures, but these titles are part of its Xbox Game Pass and Play Anywhere schemes, making it less obvious how many people have actually splashed the cash on these titles. In addition, player figures don't mean a huge amount when someone could have logged in to Rare's pirate romp once and never gone back."

It won't surprise anybody that has seen this thread http://gamrconnect.vgchartz.com/thread.php?id=238226&page=1

As I wrote in another thread, PS Now might have a higher value to a lot of customers in the countries still to get access to it due to having over 650 games vs. over 200 on Game Pass and only costing €5 more (at least in Germany).