I think pretty much everyone, excluding Trump-worshippers like you, agrees that the Georgia elections were rigged right from the start by the Republican incumbent.

The whole thing in Florida will end like usual, by a Supreme Court order (now in good hands for the Republicans thanks to, you know the guy).

Congrats to @kyrstensinema. I wish her success. Iâm grateful to all those who supported me in this journey. Iâm inspired by Arizonansâ spirit and our stateâs best days are ahead of us. pic.twitter.com/tw0uKgi3oO

Its over in Arizona, Mcsally has conceded. Arizona just elected its first female senator, the first bi-sexual senator ever, and she is also non-religous.... which I'm gonna also count as a first since I doubt anyone has been that before. Last edited by cycycychris - on 12 November 2018

I gotta give points to MCsally for not going deep into the conspiracy well like Florida, or Trump wanted her to.

Then again she probably did that because the Arizona Governor didn't go off the deep end.
You've already lost the race, so no point of pissing off the Governor.

Well this got interesting. 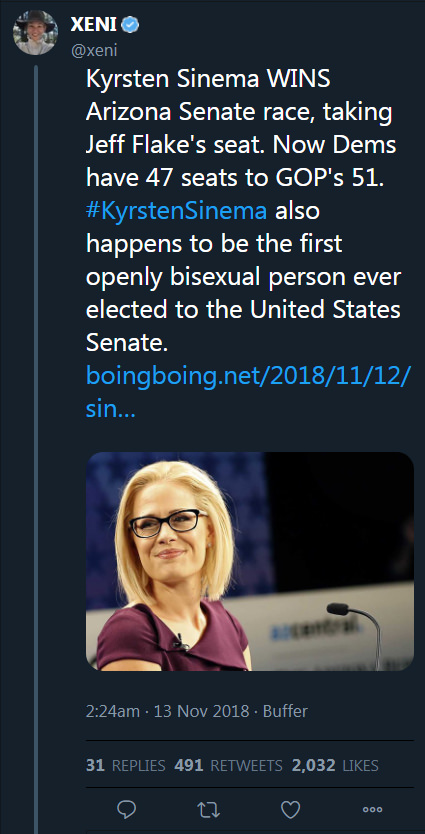 And mandatory recount started in Florida, though I don't expect the outcome to change, in spite of many votes still being uncounted.

Too bad for your narrative I don't worship Trump. Didn't even vote for him. Not my fault you guys are mad that the blue wave didn't happen. But, I guess you can call it rigged with no proof. Unlike, the BS going down in Florida.

Yea, thank God for the new Supreme Court. And with the Senate, it looks like we might get another judge on there.

The GOP won the overall House popular vote by 6.8% in 2010 (Wikipedia), which everyone called a wave. So far, the Dems also lead by 6.8% (Cook Political Report, https://docs.google.com/spreadsheets/d/1WxDaxD5az6kdOjJncmGph37z0BPNhV1fNAH_g7IkpC0/edit#gid=0), and that will only go up as California counts its absentee and mail-in ballots. If you go by the 2010 standard, this election definitely counts as a wave.

Sure..  your so slanted left you would buy anything your told by the left.

1. the law has been violated several times, ballots illegally destroyed and mixed with legal ballots.

2. after all the shennanigans, there will never be a real clear numebr of legit voter ballots counted.

The Miami Herald reported that Snipes included 22 ballots in the total that were cast by voters whose signature did not match the signature on file. Ballots with mismatched signatures are considered “illegal” under state law, which is designed to stop voter fraud.

But Snipes included them anyway in a batch of 205 provisional ballots. Once the votes were mixed together, the anonymous votes couldn’t be determined. So they were just included, Snipes told the paper, because “it seems unfair to me to disenfranchise 205 voters at the expense of a small number.”

The day before, a court forced Snipes to provide Scott’s campaign data about who voted in the election and the remaining votes to be counted — information she should have had at her ready disposal and easily rendered under Florida public records law.

Republicans charged that Snipes also failed to follow a state law requiring results to be updated every 45 minutes. Instead, tens of thousands of votes would be dumped into the state system — sometimes late at night — causing the margins in the major races to shrink as the ballots from the Democrat-heavy county poured in.

Heading into the election, Snipes’ office was being monitored by Scott administration officials after she lost a May court case for the unlawful destruction of ballots. Marring her résumé further, around the same time Snipes lost another court case over the way she privately handled absentee ballots outside the view of the county canvassing board, a three-member panel that meets in public to handle ballot controversies and certify local elections.

In Palm Beach County, Election Supervisor Susan Bucher also was slow to report results and continued counting ballots on Saturday. She was sued by the Scott campaign for her office’s decision to have staff duplicate at least 650 damaged ballots. The law says the ballots should go first to the county’s canvassing board.

“The language [of the law] is unambiguous that it is for the canvassing board to make the determination,” Circuit Court Judge Krista Marx on Saturday scolded Bucher, whom she also chastised for blowing a court-imposed deadline. “It’s my opinion zip-a-dee-doo-dah has been done to comply,” the judge said.

Bucher, in turn, picked a fight with the press and tried to block cameras from recording the canvassing board. She also attacked President Donald Trump, Sen. Marco Rubio (R-Fla.) and Scott for their claims that the process was marked by fraud or Democrats trying to “steal” the election.

its a fucking fix, not a lie. spoken truth, LOL Right!

Last edited by LiquorandGunFun - on 13 November 2018

Lol, it is based on seats won. They're going to twist whatever info they can to make it seem like big win. This was a normal mid-term in terms of the shift of power slightly.  By comparison, in 2010, the Reps picked up 63 seats in the House, Dems picked up just over half that, and Reps won 6 seats in the Senate, Dems just lost a seat.

Due to how Republicans gerrymandered the house map in 2010, it was seen as near unthinkable for Democrats to win back the house just two years ago. They basically had to win everything by 10%. Now they have actual majority power which is going to be very important going forward.