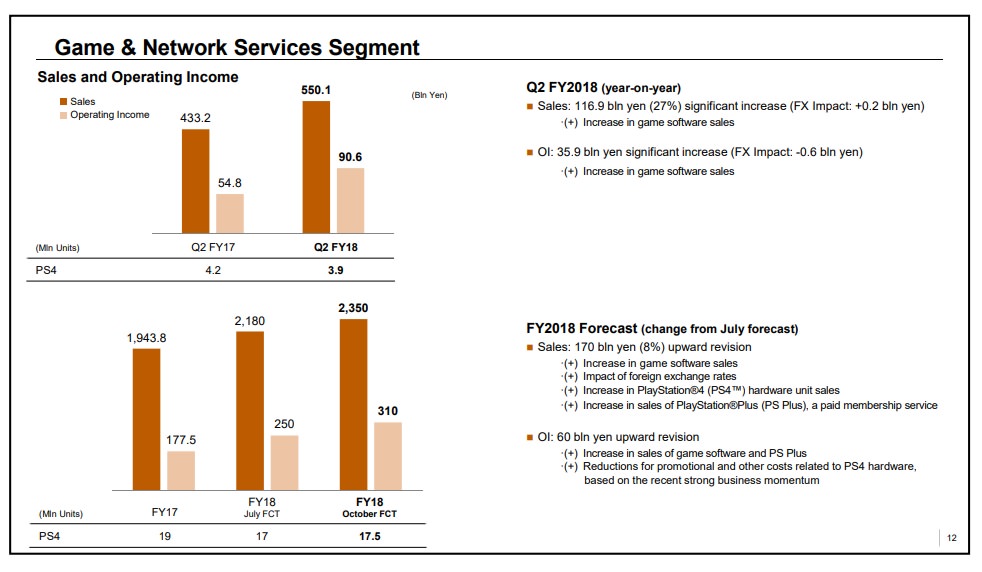 ^ nothing new here and some data is already outdated, but I think this is first time they added that info in "Supplemental Information..." doc (I maybe wrong though)[/QUOTE]
Overall Sony is in very healthy state, apart from Mobile Division 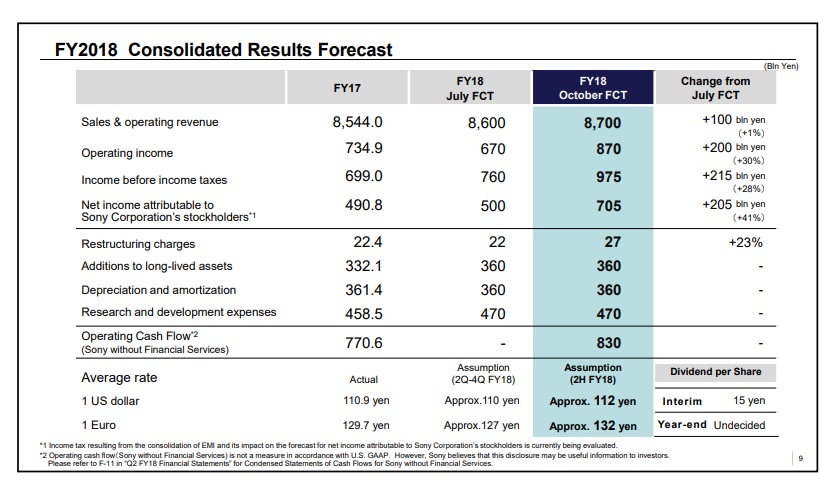 PlayStation is Sony, the rest of their products become more and more irrelevant every quarter. Sony is killing their TV and Phone business with Android. I have went over this every quarter for years, and it just gets worse and worse. Why they let Sony Electronics run another company's Operating System, and push other company's services over their own, while they bleed money and loose sales, will never make sense to me.

Looking at SIE, things are beyond positive. Software Sales up overall, and Digital goes up another another 1%. The forecast is through the roof. Sony is doing really well with PS4, and with the addition's of Cross Play, PSN Name Changes, and Downloads/Streaming via PS Now, they are setting themselves up to continue the domination going into next gen. I just hope they remember to continue to invest, and don't get caught up in the profits for the sake of profits greedy. Passion projects go further towards long term good will than greed. Niche games, a PS Vita successor, and higher end PS Consoles for the core users should be the direction they take things. Continue to deliver the mass market hardware and software to keep a steady income, but keep on driving innovation, and give back to the industry with games that push the medium and not the profits.

I might be a bit biased towards nintendo, but here is my two cents:

Sony has TRIED pushing thier own software in TVs and smartphones much like how Samsung did early on, but they both failed there and both are using Android now. At this point the only company that is pushing a non Android mobile device while having su cess is apple. So they can't really move away from that. Sony's original idea of a ' Sony environment' for all thier divices fell apart spectacularly in the mid 2000s when their own standards we're being pushed out of favor by things like USB SD and HDMI.

As for gaming... A Vita successor would be caught in the same trap the Vita was, a too expensive to develop for portable, exept it would be even WORSE off because the switch potentially always having a leg up on it (if it's cheaper it's less powerful than switch, if it's more powerful than it would be WAY out of the ballpark of a portable price point which would honestly be 200 dollars). Sony can't really go hybrid like ninty unless they leave the power hungry Western market soly to Xbox.

As for passion projects and niche titles... After moving to California they seem to be fucking up the relationship they have with niche Japan devs...

Sensing yet another PS4 hardware adjustment on this site. I'm not thinking that there are ~2.75 mil PS4s just sitting on shelves/in transit.

Solid quarterly results. Sony's comments are basically saying, "Wow, we are still selling so much despite no price reductions? Well, guess we won't need to drop the price. Thanks for the money"

So they're slightly down on hardware sales compared to last year, but up on software. Also kind of strange to see that digital ratios peak in Q1/4 and then are a fair bit lower in Q2/3.

And they currently have 34.3m PS+ subscriptions? At £50 a year that's over £1.7 billion a year in revenue. That's crazy money! And that's assuming everybody is getting the cheaper year long subscriptions. If a bunch of those are getting the more expensive 1/3 month ones they'd be raking in even more cash :O

And yet they don't use any of this juicy money to make more LoD :c

Would be nice if they start announcing 1st party game sales on their quartely reports, btw, missed chance there.

The difference now is that Sony has an ecosystem built on standard X86/Radeon hardware. In the past they were all over the place with every product running vastly different Hardware and OS's. They have moved away from everything being proprietary and started to adopt industry standards, allowing their products to interact with devices from other manufactures. The leg up Sony has over Samsung is they have a successful ecosystem, and exclusive content to build from. At this point they could only gain in sales and profiability moving their TVs and Phones to Ryzen/Radeon, and having a unified ecosystem. Selling TVs and Phones with their OS and Promoting their own services across trade events year round, and world wide boost their entire business.

If they only made one Phone, just a PlayStation Phone (successor to the Vita), they would destroy their current Xperia sales, and do it without loosing $100's of millions. They would not have to port if they build it right. Running Ryzen and Navi, the games would only need to be optimized for the lower spec hardware. It would be the same engine, and same code as the home PlayStation devices. The business model would be, buy a game on PSN, and it runs on PS Phones and PS Home Consoles. They could sell for $400 - $500 with a profit on the hardware, and offer the best mobile gaming expereince bar none. It wouldn't dethrone iOS or Android, it might not even match Switch, but running the same Unified OS and Games as PS5, it would not have to dominate on its own to survive. It would just be another profitable peice in the overall PlayStation Ecosystem.

I think they are doing great with passion projects right now. Though I do agree with their issue with Japanese relations right now. However, when you look at PSVR, it is an absolute passion project. They are continuing to push with bigger and bigger games in the VR space, even though the userbase is growing slowly. They are sticking to it, and driving the innovation for the next massive advancement in media. Obviously they are hoping for it to explode and be the next Internet or Smartphone boom, but for now at least, they are living the fact that it can take years before things finally click. If you want niche and passion look no further than Firewall Zero Hour, Astro Bot Rescue Mission, and Deracine. Two of those come from Japan, and one of them (Astro Bot) is considered by many to be the best VR game to date.