Yeah it happened again, first time was that gas leak explosion in 2015, and now it was closer to home where I work at the Time Warner Center.

The Time Warner Center Building is a mixed twin-tower comprised of over 50 retail shops and boutiques. 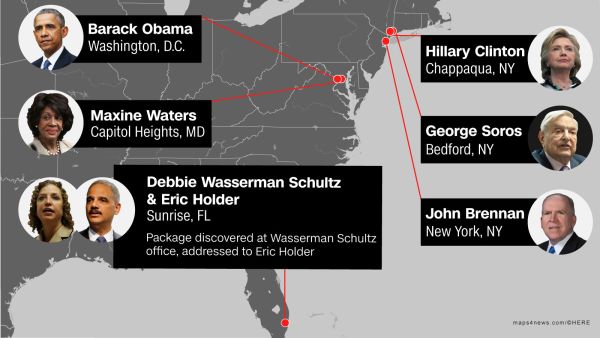 "Authorities have intercepted bombs intended for former President Barack Obama and Hillary Clinton, and several other top political figures were targeted in what authorities are investigating as a connected series of incidents.

this ain't no coincidence.

Wow I am glad that you are okay

Also most disturbing is the fact that this looks like a list of Hannity's biggest targets. Most of here have our own viewpoints but I don't think any of us are going to try to kill political enemies. Unfortunately there are people who will hear Hannity drag these people through the mud every day and then take it to heart. Hannity has been running with Deep State conspiracy for a while now and for some individuals out there they might really state to believe it. And the kicker is that believing him isn't the inherent problem. The problem is when you start thinking that you have the right to hurt others for your beliefs.

So funny how the Divider in Chief calls for unity.

No doubt about it, this is red vs blue terrorism.

I've been hearing that they were possibly a hoax and harmless.

From fed source: “complete hoaxes” multiple wires when they only needed one. Reports of cell phones being involved was false. So no intention of harm. Now the questions. Dry run, or a false flag from the right or left trying to mess over the other side?

If they are, then I'm guessing it's some crazy leftist trying to make the right look bad.

Andrew Cuomo has just said the exact opposite, that the bombs were fully capable of detonation, and that they're not sure whether the would-be bomber either screwed up, or was sending them as a warning of sorts.

There have now been 10 packages discovered:

Trump backers who have suggested the bombs are a liberal hoax:

So the people that support Trump state this is some plot by liberals and the President himself blames the media for these bombs. Interesting. I guess if this is a plot by the liberals, then they will have to up the ante by choosing someone to take a direct hit with either a bomb or shooting to raise the stakes and the message just in time for the mid-term elections.

Maybe they will wait until Trump does his usual about face and start calling it fake like his buddies then someone pulls the trigger.

Either way, you would think these people would be smart and keep their mouth shut until the FBI is able to do their work but it's election time so everyone wants to get ahead of the story.