Forums - Nintendo Discussion - Smash's full roster may have just been leaked UPDATE: Nintendo might have just confirmed this themselves (accidentally)

Supposedly these images were posted by some French person on snapchat then quickly deleted but then uploaded to Discord.

Geno and Chorus Kids make me happy though. Will be interesting to see how Mach Rider works if this is true (Bowser Jr's clown car for everything?)
edit: Summary of all that's happened so far

Summary from Reddit of everything that's going on with this leak so far... It's a bit crazy.

Marina denies he with them. We think is ACP. French Nintendo News people reach prove he works at ACP.

Background looks different, could be redesign, or could be fake? Who know?

The end for now. Why waste time, say lot word when few word do trick?

So, in the beginning this image

was leaked by a graphic designer.

The image is blurry due to it being a screenshot of a standee wraparound from a now deleted snapchat video.

Then found the original snaps in this picture

Its a wrap around for promotional material. You wrap it around stands. Above the empty battlefield picture in the original snapchat picture, you even see an example of how it should wrap around.

Oh, also there were Grinch promotional material scattered around proving that the picture was indeed taken in a company that produces these promotional stuff.

So, so far, what we know is that a french dude who worked for one french promotion company (called Marina),  and now works for another that also works with Bamco/Nintendo snapped these leaks to his friends, who were then assholes that screenshotted and sent the picture onto discord. Straight after, the dude set his LinkedIn to private

Then discovers that the Marina Facebook page offered an official response -Facebook link. Basically they said that the connection is wrong and they didn't leak the smash bros thing.

THEN IT KEEPS GOING, So I make another thread to try and keep all the new info seperate.

But it isn't thought that this means anything since, this guy has two LinkedIn profiles. One in marina, the other? Thats in another french marketing company called ACP.

We might have been wrong about which printing company this was from all along. The leak might be from ACP PLV and not Marina PLV.

I'm a little less confident in this leak than I was a day ago, but I don't think it's dead quite yet.

This is where it gets interesting (and confusing as hell).

In this picture in a comment showing the Grinch cutout being made from the actual same software that ACP (the new company we think the leak came from) has. 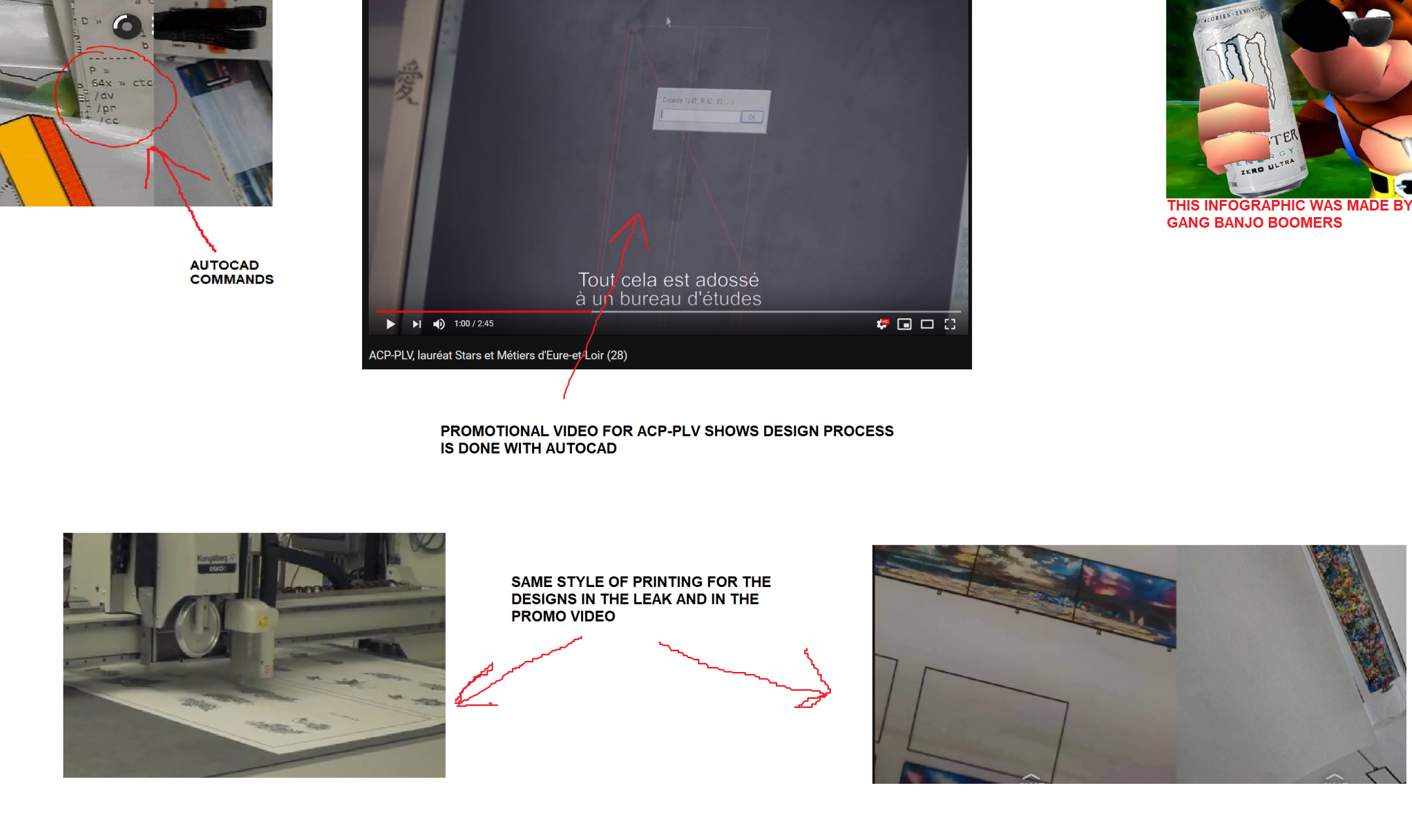 Then this tweet was issued from a French site

"BAM! Here is all the evidence that this man Leaked Smash Bros" said this random French Nintendo News company.

all reminded me that there was a Rhythm Heaven logo data-mined out of Smash 4. So data-miners found out that there was going to be someone from Rhythm heaven in Smash 4, but they were cut. Which corroborates the chorus kids leak! Although, this brings up a good point, in that the possible fake leaker could've used this knowledge beforehand

To the last argument as to why it may be fake, the comparison photo between the chorus kids in the poster and a supposed official drawing, however, my take is that the image was made afterwards as the red thing we see is supposed to be the contractor's tie and not a hot dog-- And if we assume the leak is fake, would he really use some crappy fan-art from the internet without doing some prior research of the characters after seeing all the effort that went to. Further, I researched this and confirmed that the image was indeed a recreation of the characters, 8 hours after the leaks were revealed!

Yep, this is really looking good.

The dude basically said that he wasn't aware of the whole 'leak situation'. However if he was unaware, why would his linkedin go private?'. Also, he would deny it anyway wouldn't he?

Basically, the Battlefield background is different from what we were shown before.

However, it could just have been some changes that were done to the artwork.

And that's it! The game is still afoot! Damn that was long. (is there a record for longest reddit post?)

The dude who leaked works for a company that promotes stuff

Grinch promotional materials in the background confirms it is promotional

Counter: We don't know if ACP are working on the Grinch merch.

Grinch promotional materials, are made with the same software that ACP have in their trailer thing

Counter: Loads of these types of companies use this software

A lot of people thought it was fake because the Mii fighter was replaced by Shadow. They have been put together and moved under King K and Mewtwo.

The fact that the picture is of a wrap around promotional material. You would need knowledge in the promotional industry to pull this off.

Counter: They do this with all of their IP's

Counter: Its because its a screenshot of a zoomed  snapchat video plus, they were showing more than just the image.

The background has mistakes

Counter: It could be a redesign, plus they stretched it out to fit all the characters. Could still be mistakes in a fake leak.

Counter: Well he wouldn't really say he did it would he? His Job is on the line.

This raises the possibility of a teenage son or maybe even a grandchild. If it is indeed a young child, that might explain the spelling mistakes and the general immaturity of the leak (emoji, fuck Nintendo). If either his son or grandson have the same names it might explain the snapchat name and we can assume a son could have access to his fathers work, without said father knowing.

Fucking hell the dude that made this is probably a crazy person.
This is the most entertaining, convincing leak I've seen in all my time as a Nintendo fan. I'm enjoying the rollercoaster even if this turns out to be fake.

Banjo... Yeah no this is fake.

Don't get why people want the Chorus Kids. Karate Joe would obviously be the better Rhythm Heaven representative.

I don't know if I necessarily trust this particular source...but it would be a complete wet dream for Smash fans and Nintendo fans. Banjo has long been requested and Phil Spencer has commented that he would love seeing Banjo in Smash. Geno and Isaac have also been long requested, even if they are not as prominent nowadays.
Mach Rider would fill in the retro rep that Smash has been consistent on since Melee (Mr. G&W in Melee, ROB in Brawl, and Duck Hunt in Smash 4).
Ken has been heavily rumored and, as an echo fighter, would not be surprising. He is the original echo fighter.
Shadow has also been rumored as an echo for Sonic. Not sure if he should just be an echo though.
Chorus Kids were implied to be in development for Smash 4 due to data mining and the Gematsu leak. Now that the 3DS is out of the picture, having the trio fight as one would be possible.

I really doubt there are more than 3 newcomers left( not counting echos), so I don't trust this

I'll go by Sakurai's word and that there are not too many more fighters left to be revealed before release. I know people complain that he trolls, but he has meant what he said several times and I do not think he's trying to tease us and suddenly show 8 more characters or so.

Next time, take the time to link to a proper archive as well.

Uh huh ... yeah, not true. Just as good as a rumor like last one. Also, that would be too many newcomers left to announce for the game.

Here's a newcomer for y'all :

Since the leaks are already out there.. pic.twitter.com/ZFUVUKqhMO

Banjo-Kazooie would be a megaton. If they've worked out a deal with MS to make that possible it opens the door to Rare games being licensed out for N64 Classic and (gulp) maybe even Master Chief DLC for Smash.