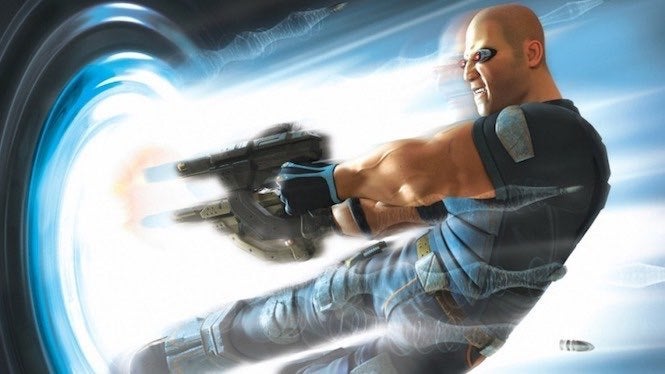 Koch Media - a publisher and distributor owned by THQ Nordic - has announced that it has acquired the arcade shooter series TimeSplitters, suggesting that a new game could well be on the way in the process.

Released across the early 2000s, TimeSplitters is a series of three shooters that feature a cartoon-like aesthetic, pop culture references, and time travel mechanics. A much-loved series, these three games were created by several ex-Rare employees who worked on titles such as GoldenEye 007 on the Nintendo 64, but the franchise hasn't been revisited since 2005.

This acquisition means that Koch Media now has the potential to release new content under the TimeSplitters name, or even rerelease older material, all of which would happen under its Deep Silver publishing label. Whether or not any new games are in the works has yet to be officially confirmed, but this statement from Klemens Kundratitz, CEO at Koch Media, certainly suggests that ideas are already forming:

“We are hugely excited to have acquired Timesplitters. The original games gave fans a massive content offer and provided a pure and genuinely fun arcade shooter experience. We have many fans of the Timesplitters series among our own staff who are passionate about creating a product that will thrill today's gaming audience.”

In addition to TimeSplitters, Koch Media has also acquired the IP and rights to science fiction action-adventure game Second Sight, a game in which players take control of an American parapsychology researcher. This franchise will also now be handled by the Deep Silver label. The press release statement ends by saying the following: "full details of future Timesplitters and Second Sight products will be revealed in due course."

Remasters or a new game.
What do you prefer?

New game hopefully. We will see.

I wonder how you go about finding who owns and buying the rights to a games series. I know of some really old games I'd love to 'own' just for the sake of it. I guess with Timesplitters it was easy, follow the trail of companies but with Mad Professor Moriaty, not so easy. Probably could buy that for a fiver too.

Well, if noone was doing anything with the series... Better bring the remakes first to remind people this series existed. Good on THQ Nordic, they are gathering a lot of interesting IPs.

THQ Nordic is certainly making some very big moves, i really hope this works out for them

Wow, at this point THQ Nordic looks as big as the old THQ. They acquired quite a lot of studios and a big number of IPs.

I'd be surprised if this means a new game. However, I'd be very happy with a simple remaster of the original trilogy, with the full local multiplayer experience.

There's hope! The Timesplitters trilogy is pretty dated but I still think it'd be worth it to release a Timesplitters Remastered Collection.

We need Kapi's reaction to this!

Great, hopefully we will get an actual shooter (Aside from Halo and Deus Ex) that can offer smart AI.
Now I just hope someone picks up the Dead Space IP, bloody EA.