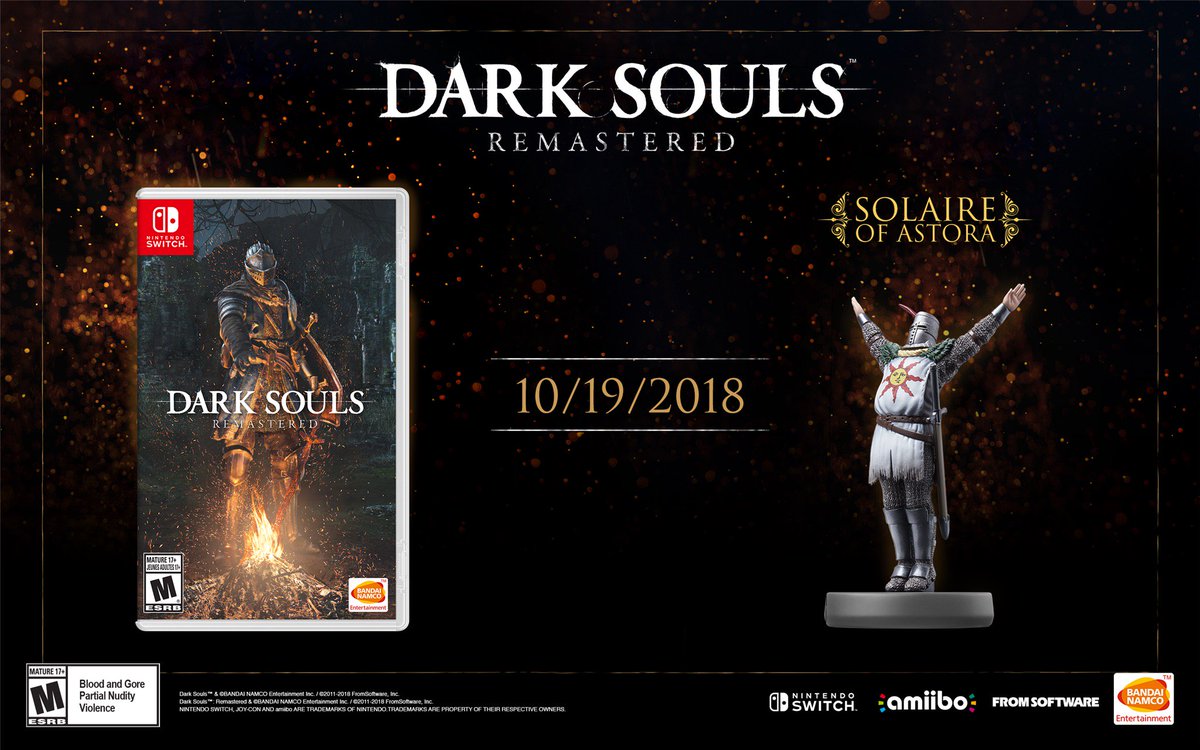 Bandai Namco has finally provided an update on Dark Souls: Remastered. The game, along with the Solaire of Astora amiibo, will now launch October 19.

Bandai Namco Entertainment is pleased to announce the release date for the Nintendo Switch version of Dark Souls: Remastered.

Also releasing on the same day is the amiibo® figure based on the famous Solaire of Astora. It will allow the true Warrior of the Sunlight to prove their faith by using the “Praise the Sun” gesture from the beginning of the adventure (the gesture can also be obtained through regular gameplay).

Both the game and the Solaire of Astora amiibo® will be available on 19th October, 2018.

With tense exploration and fearsome foes, the twisted world of Dark Souls: Remastered is full of trials and tribulations, extreme battles, diverse weaponry and powerful magic. Players can customise their character to exactly suit their play style, should it be a heavily armored merciless warrior or a frail but mighty sorcerer. The Nintendo Switch version of Dark Souls: Remastered will allow players to face those challenges head-on anywhere and everywhere! Switch players will be able to explore Lordran prior to release with the online network test. More information will be available soon.

I didn't know October was part of Summer. /s

Cool, looking forward to it

But Im glad we finally got a date.But unfortunely the Switch version sales is gonna suffer because of this delay.

But worse, it get's announced with fanfare and then sent out to die. Just to compare what gets released on the Switch in October before this game comes out: Megaman 11, Super Mario Party, The World Ends With You: Final Remix and Starlink: Battle For Atlas, among other, smaller releases. With so many high quality releases at the same time, a late port will have problems shining through before getting drowned out.

Well, it's probably coming anyway with the climate change, so why not ^^

I might buy it, it depends on whether or not I cave and get Starfox: Battle for Atlus.

i cannot even remember where from I did pre-order this!