A thread on ResetEra caught my attention a few weeks ago and I had only finished reading through the numerous pages. The thread in question was talking about the Steam client, and if it has innovated enough to remain a "platform"of choice, outside of it's library.

The thread basically involved discussions about Steam and what it had done over the years to try to remain up to date, as well as what it has done to innovate for it's own storefront features. I saw users listing what it had done, and other users listing what other features other storefronts had introduced (like Origin, Uplay, GoG etc). The one thing that stood out to me about reading all of these discussions, was that Steam, out of all the other clients, had the most set of features made available to the public user. Then near the end of the discussion I ended up finding this chart, which listed the features each storefront had: 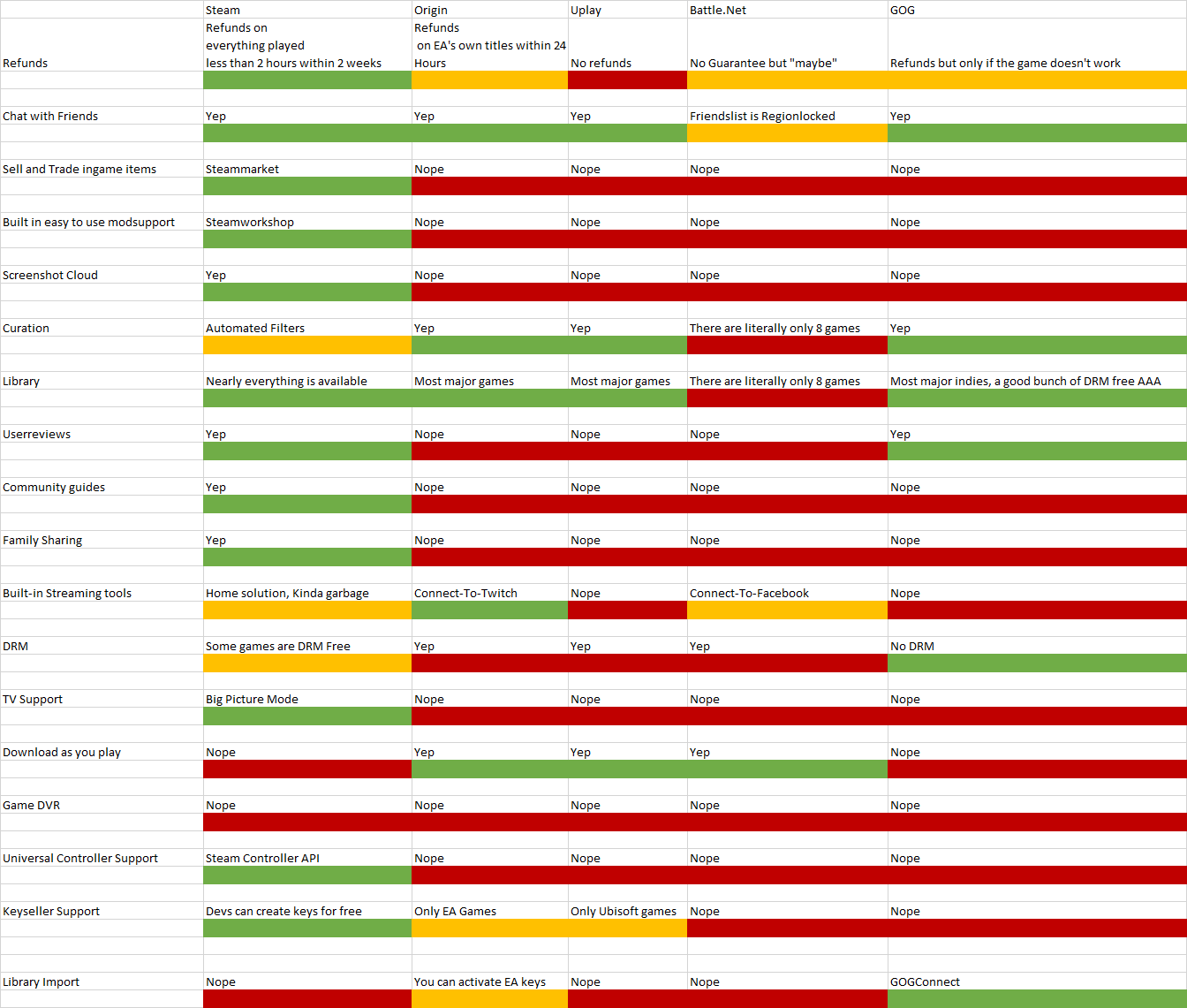 The most interesting take I get from all of this, is that, yes, competition has moved things forward to a degree, but when you look at the oldest player in the game of clients, they remain as the only ones with the most set of features made available. Now the saying would go "competition is good for everyone", but in this case, it's only benefited one storefront, while the rest have basically stagnated or due to their own philosophies and business ideals, see no need to innovate or do much within the realms that they control and own.

We know that Blizzard love to keep their games tied to a singular network (not world wide, but in terms of scope) that they own and run (Battlenet), but at the same time those games need to be played with an internet connection, otherwise they will case to function (older titles like Diablo II, WC3 and SC I can run fine without Battlenet, but lose half of their functionality as a result) in some aspects.

Origin has their refund policy, but so does Steam these days, though the others are between a maybe and with Ubisoft that's a definite nope.

Origin has been around for some years now and it honestly hasn't improved drastically outside of it's refund policy and client visual update. Uplay has changed their storefront visually, but have also adopted the way in which their client operates behind the scenes like Origin does (almost web based, with some profile features actually requiring your web browser to function).

Steam's streaming feature, I feel sucks quite horribly, but at the same time I strongly feel like Blizzard attaching their Streaming to Facebook to being the absolute worst in terms of functionality and reliability.

Ultimately at the end of of that thread, I just felt like everyone else within the scope of competition haven't really done all that much to greatly benefit the consumer. EA is trying to sell you two sub plans now on PC, which makes them more money at the expense of you having anything to own in terms of even a digital game. GoG is trying with their completely optional client, but the fact that it's optional kind of defeats the purpose of competiing client wise entirely, as they want to appear as being "DRM free". Their DRM free approach already limits what games they can recieve on their storefront, which in turn limits their overall size of their library. They could do with taking pages from the features Steam has already been using, and even improve upon them, to get Steam and everyone else to pick up their own pace.

In the end I think only GoG is the real player in the game that cares about what the consumer wants alongside what Steam has been doing. The rest care only about their own little nets they cast all those years ago, and just selling mostly what they own and nothing else.

That's definitely a pro for the Steam client for me. Steam achievements, refunds (and I guess controller support, but only for a select few games) are the things that keep me solely on Steam. If a PC game doesn't release on Steam then I'm not playing it full stop!

Oh and I agree with your final sentence. Origin, Uplay and Battle.net really do seem like they're just for 1st part stuff as opposed to a full competitor for Steam.

I know how much of a cheevo but you are so we'll give that to them as well XD.

I do have to say though, Uplay still has that system going where your cheevo points can be used to purchase in-game bonus addons or wallpapers/avatars to make use of.

Good chart, Steam is still king for me, I have the majority of my digital games on there, but I also have over 70 titles on GOG now. My Origin account consists of around 15-20 games, I think. I try to avoid Uplay as much as I can, it's an atrocious service.
Battle.net can burn in hell, my account got hacked and they demanded I re-purchase serials for all my games, I've not bought or played anything Blizzard ever since.

Aye, as far as things go, Steam ahs the majority of my games bought from there, with GoG in second, and Battlenet and Origin in 3rd/4th place respectively.

Uplay still needs more work and I think they should either drop their client, or take all their games off of Steam like EA has done going forward, which in turn will either force them to update their client drastically (as competition should drive them to) or they will let it die and have themselves ejected from the PC market over time. Either way, competition isn't driving them to do anything since they are making money from Steam sales, and not caring all that mucvh for the PC market (even though they keep telling us in tid bits that they do, yet I don't see it).