"Nintendo has announced its financial results for the first quarter of the current fiscal year, which covers the period from April through to June 2018. In the report, the company has given sales-to-date figures for its current hardware, as well as data specific to the quarter.

As you might imagine, Switch is doing incredibly well, with 19.67 million units sold since launch early last year. In terms of software, 86.93 Switch games have been sold since day one.

So I guess vgchartz had better update their numbers. I'm not sure if July sales are included in Nintendolife's report, but if they aren't then that means Switch has definitely sold over 20 million units.

So 1.6m on shelves according to VGC? Sounds a bit high so it's probably undertracked a bit here.

Maybe just by a little. Nintendo stated that "Nintendo Switch, hardware sales in every region have been trending upwards since the video game expo, E3, was held in the US in June" yet VGChartz sort of shows Switch sales trending downwards for the weeks since E3. 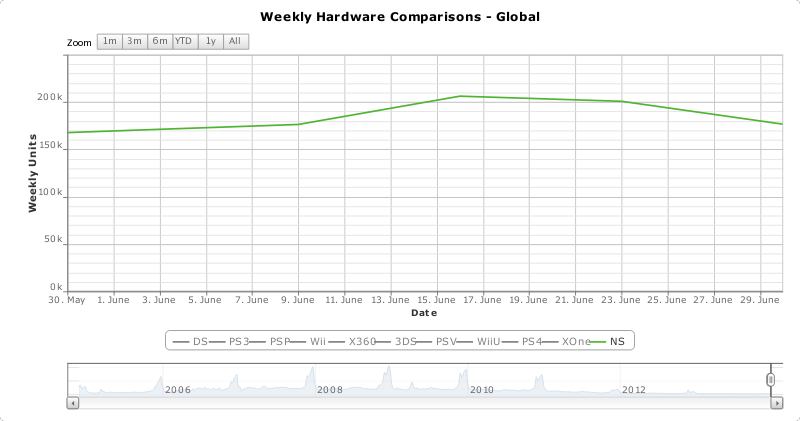 1.3m on shelves/in transit. Seems fine to me, there's really no way to know for sure. No adjustments need to be made based on this information.

just bookmarking for the insanity

The drop isn't surprising, unless there is anything significant coming out this year aside from smash.

*points to Starlink: Battle for Atlas with Fox McCloud* :)

For the love of god, when will you understand that  quarterly financial results are ALWAYS SHIPPED, NOT SOLD.