Forums - Gaming Discussion - So, where do we think Elder Scrolls 6 is set?

Elder Scrolls 6 has been announced, and unlike previous games, it has no subtitle which gives away the location of the game. The location in the trailer doesn't look like Black Marsh, Summerset, Cyrodil, Hammerfell, Morrowind, Elsweyr, Skyrim, or Valenwood. That leaves High Rock, a full Tamriel map, or another continent besides Tamriel as possibilities in my eyes. What do you guys think?

So guys, it looks like we're actually going to Hammerfell in TES 6. After Todd Howard said in that one E3 interview that there were clues as to the setting in that teaser trailer for fans to dissect, a youtube channel by the name of Camelworks decided to do some deeper digging.

In the trailer, the camera pans forward through some misty mountains and then you see an old stone settlement above a crater, a crater which seems to have darker rocks along it's walls than the rest of the surrounding area. Within the Elder Scrolls lore, this youtuber found a settlement known as Azra's Crossing, which is located within Hammerfell to the northwest of the Dragontail Mountains, right where the Bjoulsae River Flows into the Iliac Bay. Within the lore, Azra Nightwielder was a shadow mage, and he built this small town in Hammerfell, named after himself. However, one day he lost control of his shadow magic and a powerful dark spell created a crater beside his town. The location in the trailer seems to be a perfect match for this, the misty mountains at the beginning of the trailer are the Dragontail Mountains, the town and crater are Azra's Crossing, the large body of water is the Iliac Bay, and the rocks in the crater being darker than other rocks in the area are a match for the lore, as the heat of the spell that created the crater would have formed magma, which would have cooled into dark igneous rocks.

As the camera in the trailer continues to pan forward, you get a view of the coastline ahead. A larger city is shown along the coast, as well as 3 peninsulas. 3 peninsulas that match can actually be seen on the larger official Hammerfell map. 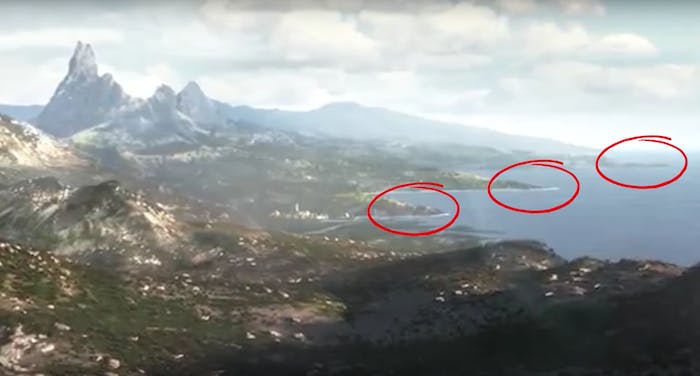 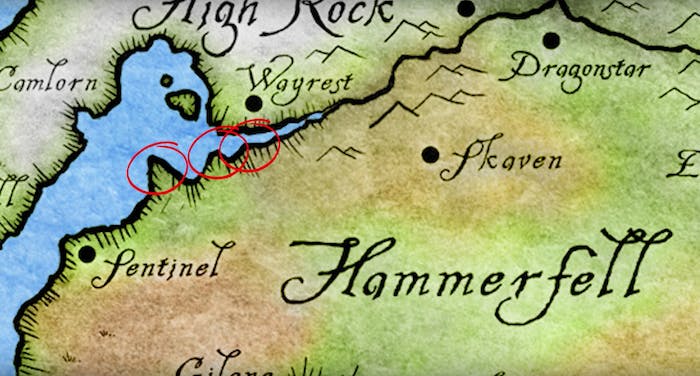 The city in the trailer seems to be Lainlyn, which is along the coast of the Iliac Bay in the same location where the first peninsula is on the above map. You can seen Lainlyn's location on this map:

I was waiting for that sub-title but they didn't reveal it.

If they didn't reveal it, it's because they aren't sure yet. Thus, i think it's a new continent. They will leave Tamriel for the MMO and expand the universe of the elder scrolls.

It's the next game after Starfield, which was already announced as Next Gen soooo I don't know why people would worry about that so early when it's clear that they have no idea themselves about the setting or when we're even gonna have the first legit trailer for it.
Like, I'm expecting 2023 at earliest. 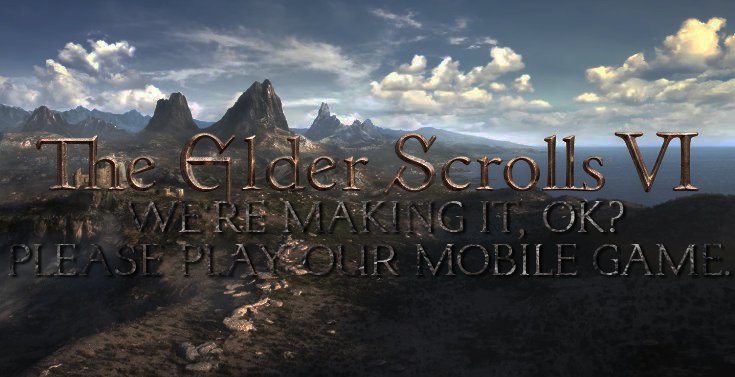 Yeah, that was my line of thinking as well. They have been slowly adding more and more regions to the Tamriel map in Elder Scrolls Online, including regions that have never been in a main singleplayer Elder Scrolls game, feels strange to spoil those never before seen regions in ESO, unless of course the main series is going to move away from Tamriel.

Akavir- To the east of Tamriel lies Akavir. The continent is home to 4 races, the Snow Demons of Kamal, the Serpent-Men of Tsaesci, the Monkey People of Tang Mo, and the Tiger Dragons of Ka'Po'Tun.

Atmora- Far to the north of Tamriel, this is the continent that the humans of Tamriel came from originally, before they migrated south to Skyrim and spread across Tamriel. The continent was an uninhabited frozen wasteland as of the 3rd era. The location in the trailer looks like it might be Atmora to me, if it has thawed since the 3rd era.

Aldmeris- The homeland of the Elves according to myth, Rather or not the continent exists, or where it is located, is unknown. It is believed that the Elves of Tamriel evacuated to escape destruction, and migrated to Tamriel.

Pyandonea- A tropical island to the South of the Summerset Isles, and home to the Maomer, or Tropical Elves. The tropical setting rules this out for TES 6, the trailer does not show a tropical setting.

Thras- An archipelago to the west of the Summerset Isles, home to the Slug people known as Sload. What is known about Thras doesn't match what was in the trailer.

Yokuda- A continent to the west of Tamriel, and the original home of the Redguard. The continent was most sunk underwater by a disaster during the 1st Era, and was abandoned by the Redguard, who migrated to their current home of Hammerfell in Tamriel. It is described as a harsh continent, with barren hills. Possibly a match for the trailer, if the sea levels have dropped since the 1st era.

If it's a new continent I have no idea, but I'd like to visit Hammerfell because it sounds interesting, lol.

Why set the new game in a totally new continent if there's still so much of tamriel left unexplored? (Arena doesn't count because its such a old game and online is a MMO)

In the Scrolls of Elder.

Considering how far the release is still off, it might as well be some completely new place the elves built while Bethesda was busy with Fallout.