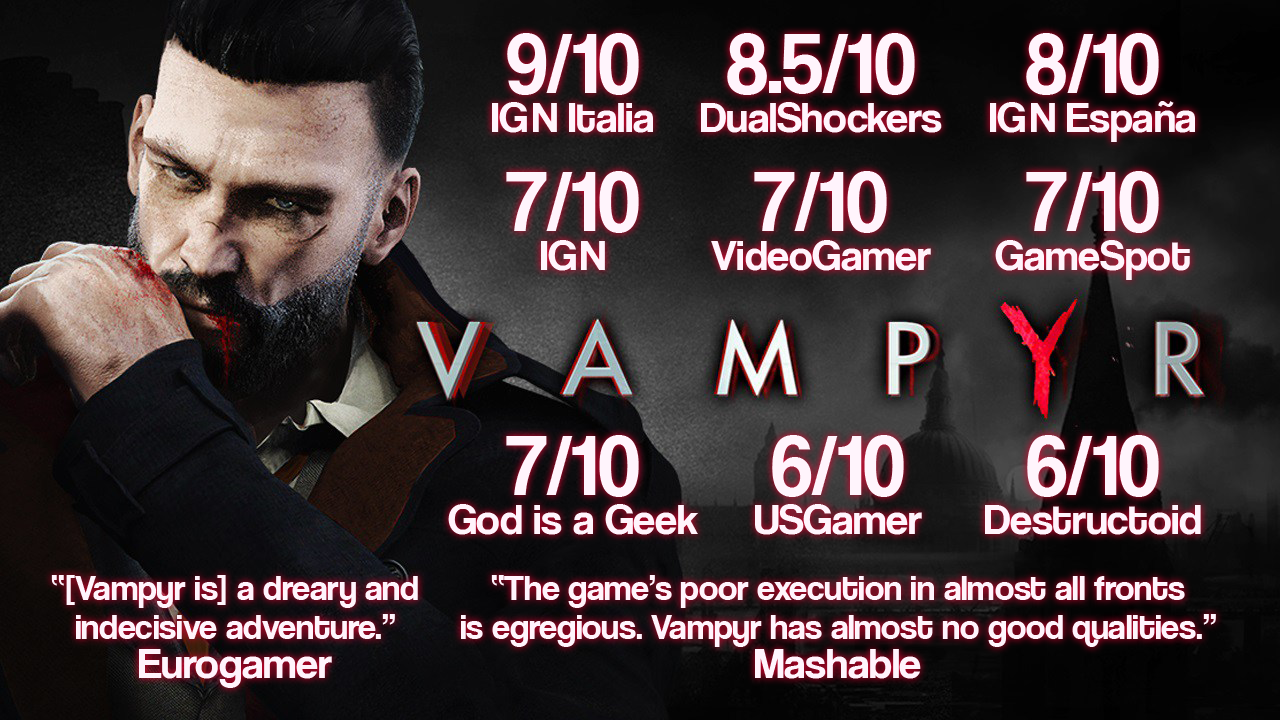 Vampyr is a great experience. Its fun story will keep you intrigued for hours upon hours, and refined and simple gameplay will keep you hooked for even more. While the game does suffer from a few bugs and texture problems here and there, it doesn’t stop it from being a terrific game, one might even call it a sleeper hit. If you’re looking for a long game to sink your teeth into during the game’s industry’s normal summer lulls, then this might be perfect for you.

Vampyr is a slow burn of an RPG, taking its time to ramp up its intriguing blend of science and the supernatural in an elaborately gloomy version of London. When it gets going you can see the potential of the way it offers you more power if you consume its interesting citizens. But Vampyr never commits to this idea to the point where I felt I needed to make that sacrifice to succeed in its relatively simple combat, which leaves it feeling toothless and vulnerable to having a lot of its fun sucked away by technical issues, despite its genuinely engaging story.

Vampyr serves delicious ladles of angst and drama with a hearty slice of excellent, morally grey choice system that will genuinely surprise you, all wrapped up in a wonderfully gloomy London. It's just a shame the combat turns a bit sour.

Vampyr unfortunately flounders after building some solid foundations in the opening hours. London feels like a city on a knife edge, and the citizens prove to be an inviting cast of creative characters. But Vampyr then lures you into sacrificing these characters, cutting out a key part of the game, all to have a hope of standing up to the horrors that await you in the shadows of London.

The story may be a tad lackluster, and the combat may be clunky as hell, but Vampyr does offer a compelling adventure for those looking for some blood-sucking fun.

Dontnod takes a thrillingly Gothic perspective on early 19th century London, but squanders it in a dreary and indecisive adventure.

The idea of being a vampire stalking the streets of early 20th century London seemed like such a cool idea, but the game's poor execution on almost all fronts is egregious. Vampyr has almost no good qualities, and any that you can squeeze out of it are far outweighed by the negative qualities.

Nice. Got a review code for it. Will get a review up for it after I finish the games that are ahead of it for me.

I have it preordered. No midnight release...... so I have to wait til tomorrow after work.

I actually guessed it'd land somewhere in the 70-75 range... pretty accurate guess, lol. It looks interesting, but also a bit clunky, I watched the IGN review and it sort of confirmed everything I thought about the game, although I think I'll still pick it up somewhere down the line.

Im not too surprised. Gameplay looked a bit clunky...with saying that. I thought the same of Alpha Protocol and ended up loving every inch of that game.

I got it pre-ordered. Though, I'm going to have to wait til Fri to pick it up. I really enjoy supporting the smaller devs, which are mainly published by Focus Home Interactive. You can just tell a lot of heart went into the project, even if it's not perfect. Also looking forward to Greedfall.