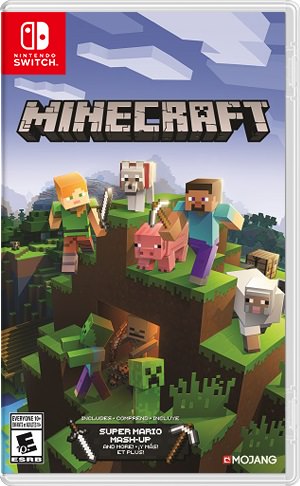 Minecraft is seeing a big upgrade on Switch next month. The Bedrock Engine is confirmed for the system on June 21, along with a physical release. Pricing for the retail edition is set at $29.99.

The Bedrock version of Minecraft for Switch supports all previously released content. Additionally, you’ll now be able to connect with players on other platforms. It will also supported Nintendo Switch Online in September plus Xbox Liev achievements and Gamerscore.

Minecraft is one of the best-selling video games of all time, selling more than 144 million worldwide across all platforms, including Nintendo Switch.

While the Minecraft: Nintendo Switch Edition game is currently available on the Nintendo Switch system, this June will see the universal Minecraft Bedrock Engine come to the platform, along with a new physical version coming to stores at a suggested retail price of $29.99.

This Bedrock version of the game contains all the great previously released content, including the Super Mario Mash-Up Pack exclusive to Nintendo systems and all DLC, but now allows players to connect with friends on non-Nintendo systems like Xbox One and Android mobile phones via cross-platform play. In addition, Minecraft will support the Nintendo Switch Online paid membership when it launches in September, as well as Xbox Live achievements and Gamerscore.

A new in-game store in this version of Minecraft called the Minecraft Marketplace will let players obtain community-created content like skins, worlds and textures for their Minecraft World using MINECOINS, a new virtual in-game currency. Players will also gain access to new mini-games and game modes through online community-run servers.

Players who already own the Minecraft: Nintendo Switch Edition game will be able to download this definitive version free of charge so they can easily upgrade and enjoy all the added features. Visit Nintendo.com or Nintendo eShop for details.

With Minecraft on Nintendo Switch, players can take the newest version of the massively popular game wherever they go.

I would like to see some sales data on the digital copy on the Switch. Maybe it haven't reached 1mil?

Can't wait for cross platform play! I know I heard this update had some issue on Xbone, hope those have been fixed now.

I avoid the "together" version like the plague. The UI is garbage compared to the original... at least on consoles.