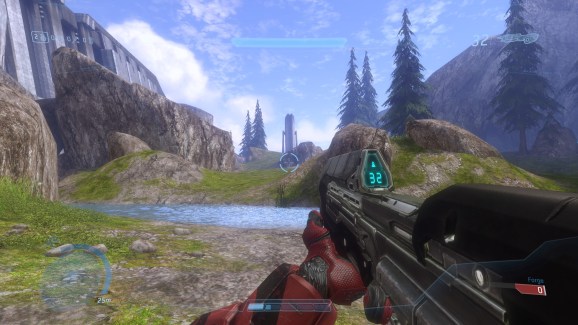 (above: 'Halo Online' is available for the PC in markets like Russia)

The Halo series has stuck close to its Xbox home over the years, but that could change. Microsoft says it is considering bringing an older Halo game to the PC. This comes after the company made moves to shut down a community-made mod called ElDewrito that enabled players to run the canceled Russian-only Halo Online.

Developer 343 Industries, which runs the Halo series, was making Halo Online as a free-to-play PC version of Halo 3. The studio ran a beta for it in Russia in 2015, but it pulled the plug on the project not long after that. ElDewrito revived the game, and Microsoft and 343 posted a blog explaining why it has asked ElDewrito to cease development.

“With Halo Online, there’s a common misconception that once it was canceled, the assets were either turned over as ‘open source’ or left for the community’s whims as ‘abandonware’ — neither of which is actually true,” reads the 343 blog. “Not only did Microsoft issue takedown notices at the time of the original leaks, but many elements of that underlying code and content are still actively being used today and will continue to be in the future.”

The blog also explains that Microsoft makes allowances for fan creations where it can. Other Halo-related projects should continue as long as they meet certain standards. But ElDewrito was using critical code that Microsoft had to protect or else it would risk losing the rights to it in the eyes of the law.

But this means that ElDewrito is dead. The modding team can no longer continue working on it or else Microsoft will have to escalate its legal actions. Once again, this creates a gap on PC for people who want to play Halo with a mouse and keyboard on their Windows rig — and 343 Industries has acknowledged that demand.

“One thing remains clear – the community really wants more Halo on PC,” reads 343’s blog. “As we look ahead, we’re very excited about the prospects of an official classic Halo experience making its way to PC, and we hope to be able to partner with the ElDewrito team and broader mod and content creation community to help inform the types of experiences and features our fans desire. While we have nothing to announce today, please know that the PC community is very important to us and top of mind as we work towards the future.”

That’s a big shift for 343 Industries, which has had to prioritize console for its previous Halo games. But Microsoft has changed its focus from Xbox to a broader platform service that can include both console and PC. That has led it to launching almost all of its first-party games on both Xbox and PC at the same time.

Xbox boss Phil Spencer emphasized that his team is thinking about Halo on PC on his Twitter, so we may hear more about this soon.

I'll say about this the same as I said about Nintendo's war on Youtube and fan games... it's their IP, they own it and they can do whatever the fuck they want as far as I'm concerned.

I oppose IP law. You can't (morally speaking) own an idea.

With that said, in the world in which we live, this is to be expected.

The dumb thing about US copyright law is that Microsoft really can lose the rights to their IP if they let others use it for free, so they're pretty much forced to take action.

One thing that Spencer have done a good job is to bring Xbox games to PC LMAO.

Just FYI Halo Onlie isn’t currently available anywhere. It was shut down a long time ago and never got past beta test stage.

Is that a bad thing? I dont understand if sarcasm or serious.

Why do you always do this to fan projects, Nintendo?!

Microsoft doesn't have enough of those to shut down the amount of projects nintendo does. It's really an epedemic for Nintendo.