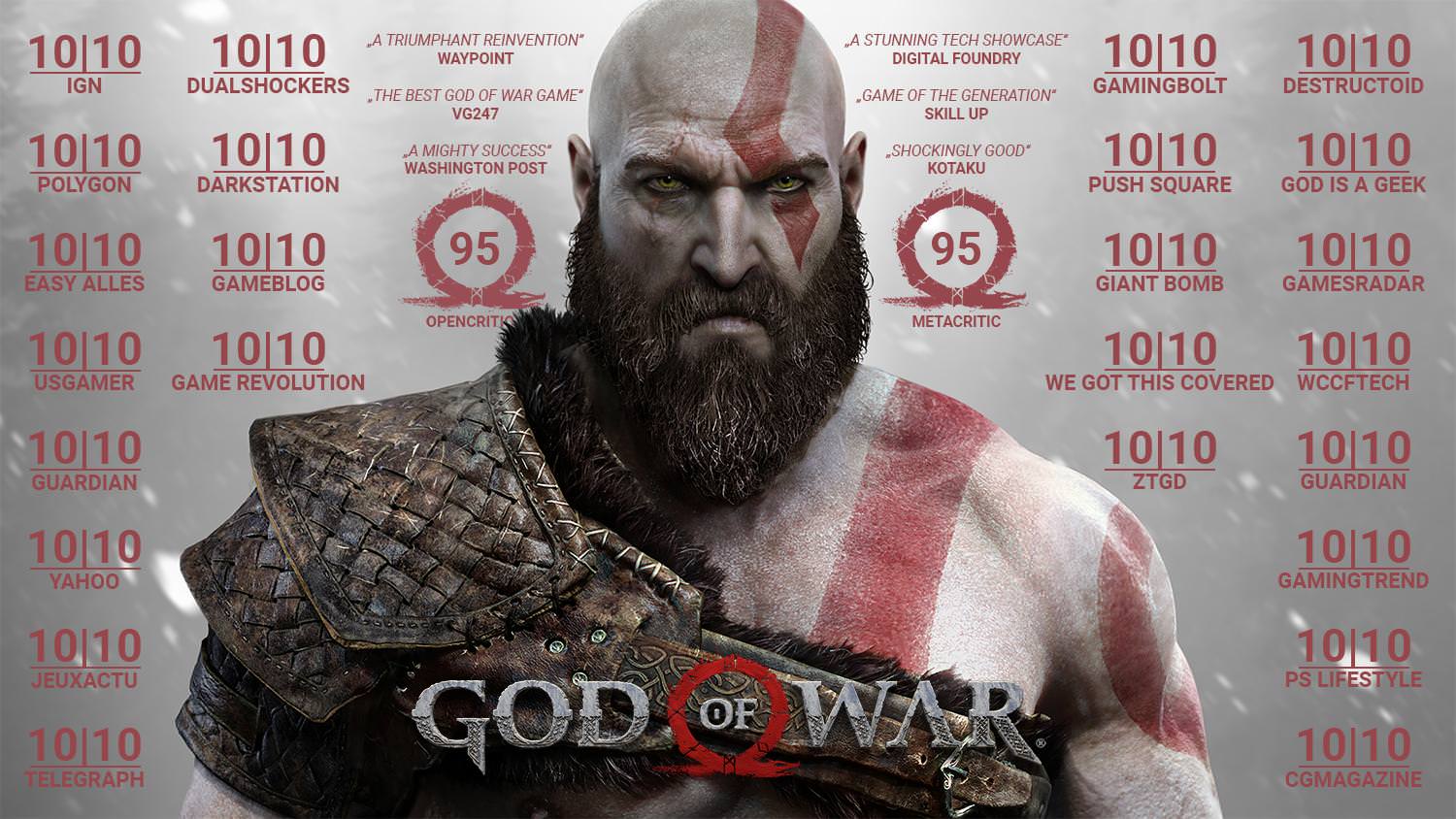 A decade ago, director Cory Barlog helped establish the God of War franchise as an iconic gory and debaucherous video game romp. While its antihero, Kratos, had pathos (he killed his wife and daughter in a fit of rage, his skin forever grayed by their ashes), it served little dramatic purpose, rather existing as a grimdark excuse for his god-slaying and orgy-having ways. Barlog — now older, a father — has returned to the series with a bundle of talented designers, many of whom served on the earlier games, to make good on that rich but neglected potential at its core. There’s still plenty of gore, but the now the guts have meatiness.

Some die-hard fans may fear this isn’t really God of War. I suppose they’re right. It’s even better.

God of War doesn’t just feel like the next step for the franchise, but for the entire video game industry. Phenomenal visuals, rewarding exploration, and a deep, nuanced combat system contribute to an epic adventure that should be experienced by every human on earth. Santa Monica Studio is taking us all to Valhalla.

Yes. Like Kratos, the god of fury who must learn not to fear his son, this is a strange beast, really. The latest technology and astonishing craft and artistry are employed to deliver a game of extremely simple pleasures - a wash of new pseudo-ideas that cannot hide the fact that the basics remain unfixed because they were not broken. God of War dresses things up, in other words, but it is ultimately the same deal it always was. As is the way with myths, I guess. As is the way with gods.

I expected great action from God of War, and it delivers that handily. But I didn’t expect it to be a thrilling journey in which every aspect of it complements the others to form what is nothing short of a masterpiece. It’s a game in which Kratos, a previously one-note character, becomes a complex father, warrior, and monster, embattled both on the field and within his own heart about how to treat his son; one in which the world opens up and shifts, offering rewards in both gameplay and knowledge of its lore that I treasured with each accomplishment. The obvious care that went into crafting its world, characters, and gameplay delivers by far the most stirring and memorable game in the series.

In many ways God of War is what the series has always been. It's a spectacular action game with epic set pieces, big-budget production values, and hard-hitting combat that grows more feverish and impressive as you progress. What may surprise you is how mature its storytelling has become. Like Kratos, God of War recalls the past while acknowledging the need to improve. Everything new it does is for the better, and everything it holds onto benefits as a result. Kratos is no longer a predictable brute. God of War is no longer an old-fashioned action series. With this reboot, it confidently walks a new path that will hopefully lead to more exciting adventures to come.

God of War is a different game for a new era of the medium. While I'm a sucker for more frantic arcadey action there are plenty of studios left carrying on that legacy. Unless something catastrophic happens to Sony Santa Monica, there’s more story to tell, and I hope the exact same team is able to tell it.

Years ago, Kratos killed the deities of Mount Olympus in a gory rampage. Now, in the Norse realm, he has remade himself into a different kind of god. He is quieter and more deliberate, affected by his history but not constrained by it. Kratos’ reinvention serves as a narrative hook, but it also parallels the series’ evolution as a whole; where God of War once relied on bombast and bloodlust, now it leaves space for strategy and nuance. It still has superb action and plenty of jaw-dropping moments, but it supports them with a new level of depth and maturity. God of War learns from its past while clearing an exciting path for the future, and emerges as one of the best games of this generation.

A lot of what goes into God of War feels as though it was cherry-picked from the modern gaming zeitgeist. The semi-open world structure, loot system, and a much deeper narrative focus work well, but are all trends being pushed by most other big games. As a result, God of War can feel slightly homogenised in a way that some fans may find unappealing. Thankfully, a strong sense of setting and brutally satisfying combat help maintain that God of War identity. If it wasn’t made abundantly clear already, this is the first in what will most likely be a new trilogy for the God of War franchise, and this first instalment serves as a pretty great foundation.

God of War is a special game. This reimagining of the famous PlayStation franchise elevates the series in unexpected ways, without forgetting the core tenets that made Kratos a fan-favourite to begin with. This is a sprawling single player epic with an abundance of secrets and a storyline that keeps you hooked from start-to-finish. While it borrows liberally from other action adventure greats, its unique combat and outstanding artistic direction separate it from its immediate peers. A truly impressive achievement.

Vengeance may not be what Kratos seeks anymore, but that has done little to stop the God of War franchise. Santa Monica Studios have successfully transplanted the Ghost of Sparta to a new world with a new mythology and given the formula the revamp it needed. God of War retains many similarities to its predecessors, but the gameplay feels refreshing thanks to the inclusion of Atreus, the Leviathan Axe and the integration of RPG mechanics. While it’s nice that players have control of the camera, it’s too easy to lose track of enemies and take unneeded damage. The focus on the relationship between Kratos and Atreus adds depth to the character that previous entries only hinted at all while delivering a solid story. The main antagonist is dull and some plot threads are dropped, but they do little to pull away from the character-driven plot. Olympus and the pantheon of Greek gods are gone, but God of War stands tall outside their shadow.

God of War achieves a very impressive balance between the epic and the mundane, between the ultra violent and the domestic. It's undoubtedly the coolest and most interesting God of War to date.

This is easily up there with the best games of this generation, and it’s the easiest ten out of ten I’ve ever given. When you think you’re reaching a point where the gameplay slows down, you’re introduced to something better. This is by no means a game just for original fans of the series either. Due to the new setting, newcomers will enjoy it just as much. It’s welcoming and punishing, but ultimately satisfying, and the benchmark has been set firmly for the future of video games. A masterpiece.

Anything above 90 on metacritic is great

If it stays above 93, it will be the first exclusive non-Nintendo game of this gen to do so.