A former French left-wing parliamentary candidate has been arrested over his tweets about a policeman killed during a jihadist siege in southern France last week.

Stéphane Poussier appeared to celebrate the death of Lt-Col Arnaud Beltrame, saying it was great.

Stéphane Poussier stood as a candidate for La France Insoumise (France Unbowed), the far-left party led by Jean-Luc Mélenchon, during legislative elections in 2017.

The party has expelled Mr Poussier, calling his tweets "shameful and abject". 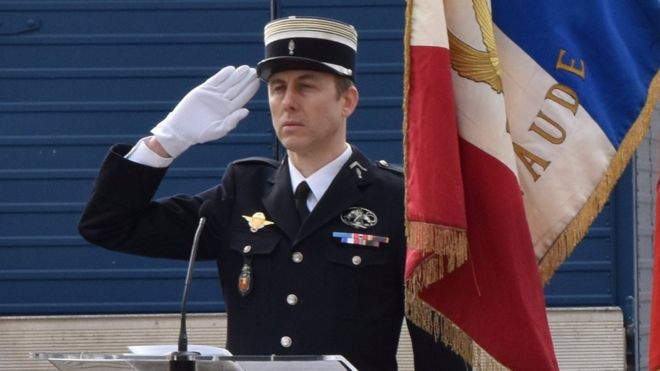 I would say he shouldn't be charged, but my opinion isn't really important, since I am not accustom to the laws of the country and how ethical the laws are.

Seems many people just assume they have freedom of speech until their government reminds them they don't.

What kind of dumbass applauds the murder of his fellow countryman and a policeman by a fanatically religious terrorist member of ISIS? That guy. I'm all for free speech except when they promote violence.

Hey, remember what I said in the last thread you made before I locked it?

"I ask that you please add an opinion piece in your OP, thank you."

Now, not all threads need an opinion piece of course, but it seems all you've been doing is posting links to articles with a few snippets from it posted in the OP... it's starting to feel like spam if I'm being honest.

The way the article states it, it doesn't really sound like he's "promoting violence". He's just a dick.

Praising the murder of someone by terrorists is promoting that sort of action.

Tough call. On one side I totally stand for freedom of speech as I believe it is fundamental that people be free to believe and say whatever they want. On the other hand, this guy is a total dick, no question there so he shouldn't be arrested but he should be totally ostracized in any and every possible way.
But arresting him is just as bad as what happens in Europe and how we let followers of that sick religion pour in by the millions.

A despicable person but it should be his right to be despicable, so jailing or fining him is a terrible idea.