Pretty sickening, I would hope exceptions were made for these women and put in a hardcore, male prison known for sodomy. Even though it's over the counter sleep supplements its horrible, who knows what else they would do to make there job easier. Why work a a teacher to toddlers if you can't handle the heat.

In advertisements, Kiddie Junction billed itself as more of an educational institute than a day-care center. It told parents that its teachers used the latest child development research to instill a lifelong love of learning in its tiny clients.

But staff members at the Des Plaines, Ill., child-care center faced a simpler question: What do you do when you can’t get a 2-year-old to settle down for a nap?

Three employees thought they had an answer, police say. They have been arrested.

They are accused of giving toddlers gummy bears dosed with melatonin, an over-the-counter sleep-hormone supplement that induces sleep.

The owner and director of the day-care center called police after finding a nearly empty bottle of melatonin gummy bears, according to Chicago CBS affiliate WBBM-TV. The owner confronted one of the employees, who allegedly admitted to giving the gummies to children without parents’ knowledge. It was unclear how long the alleged drugging had been going on. Only four gummies remained in the 120-count bottle, police told WBBM.

Officers investigated and found that two other staff members had also been handing out the gummies to some of the dozen 2-year-olds in the center’s care.

According to the Chicago Tribune, after police consulted with the Cook County State’s Attorney’s Office, the staff members — Kristen Lauletta, 32, of Niles; Jessica Heyse, 19, of Des Plaines; and Ashley Helfenbein, 25, of Chicago — were each charged with two counts of endangering the life or health of a child and two counts of battery.

The caregivers told police they didn’t think the gummies would be harmful because they were an over-the-counter product, according to ABC News. But the Walgreens-brand gummies say on the label that they are not to be taken by anyone younger than 16. 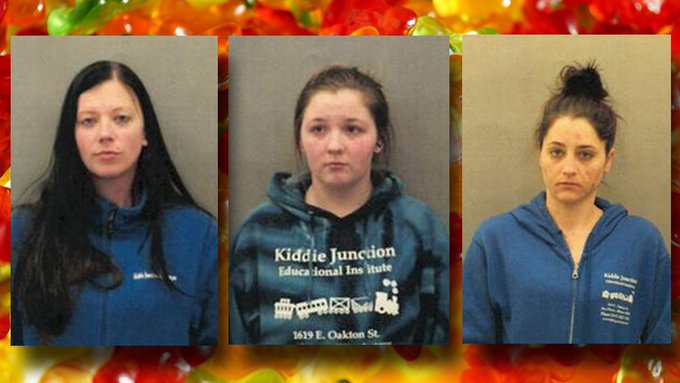 The three are scheduled to appear in court April 4. They could not immediately be reached for comment. It was unclear whether they had hired lawyers. A woman who answered the phone at the child-care center told The Washington Post that “the director is busy at the moment.” The director didn’t immediately return a message seeking comment.

You have an interesting moral compass.

Anyone who knowingly hurts children deserves to be sodomized against their will at the very least, imo. Some deserve much more than that.

You would rape these women?

Don't you think you're overreacting a little bit? There are way worse things happening whole the time.

It's always interesting to see people condemn terrible acts and at the same time suggest far more heinous responses as punishment. Some people use every opportunity to dole out torture and tortuous imagery under the guise of morally justified retribution.

Certainly what these women did was irresponsible and will come with consequences. The shame alone and the loss of job prospects in their field will certainly be a grave (and warranted) punishment. But to suggest sodomy for giving kids a minor sleep aid (that is available over the counter)...I just don't even know where to begin on how messed up that is.

That's extremely disgusting. They sure deserve a good amount of time in jail (but not the one John said), and never be allowed to take care of kids, nor elderly people either.

OP's idea of punishment is too extreme, but they definitely deserve a hefty jail sentence for this.

No, I said I hope they get put in the position of that happening. I'd be the same if they were men, as I said, anyone who hurts children knowingly should be sodomized, imo, at the very least and a male prison is a great place for that to happen. You don't knowingly hurt two year children just for your own quite time and what makes it worse is it's there job to keep them safe. Don't make this a gender thing, I am equal in my disdain of child abusers.