North Korea’s leader, Kim Jong-un, has told South Korean envoys that he is willing to begin negotiations with the United States on abandoning its nuclear weapons and that it would suspend all nuclear and missile tests while engaged in such talks, South Korean officials said on Tuesday.

President Trump reacted with guarded optimism to the news, which potentially represented a major defusing of one of the world’s most tense confrontations.

“The North Korean side clearly stated its willingness to denuclearize,” the statement said. “It made it clear that it would have no reason to keep nuclear weapons if the military threat to the North was eliminated and its security guaranteed.” 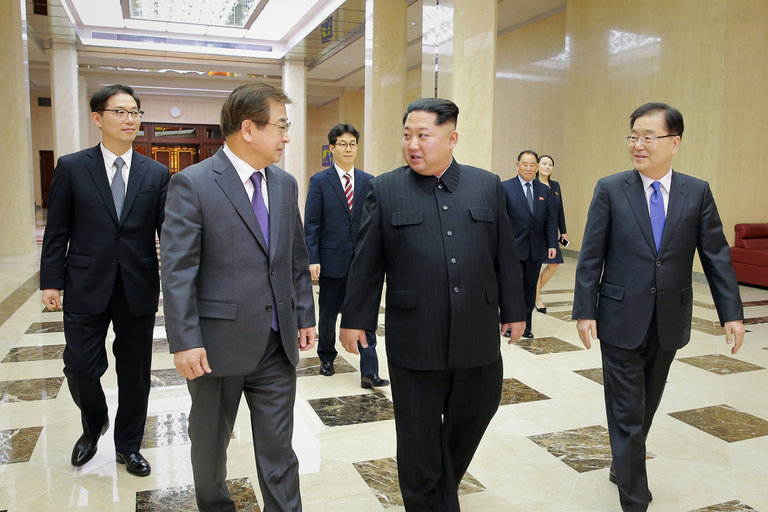 “It made it clear that it would have no reason to keep nuclear weapons if the military threat to the North was eliminated and its security guaranteed.”

So they're just gonna demand that the US completely pulls out of South Korea and Japan and ceases all military drills.

Eh...what now?
They were working so long for creating nuclear weapons and now they want to get rid of it? Either they failed miserable on producing them or they negotiation tactic is a fluke.

Oh crap, so what about WW3?
With this kind of news how are we supposed to ever see WW3 right?
There's still Russia but this NK business is a bummer. If you can't get to WW3 with two madmen such as Kim Jong Un and Donald Trump then who can you trust for the job?
What a disappointingly peaceful world that we live in.

They'll want USA to remove their troops from South Korea and probably around China as well. But USA won't agree to it.
The reason China let this go on up until this point was because they feared USA at their boarders more than North Korea with nukes.

So its all fine now? Yeah, tell that to the regular people living in NK.

Sounds promising, but it's something I rather feel paranoid about. I'm glad that Trump is also looking for peace here.

Most interesting quote from the article:

“There was no other specific demand from North Korea in returning to dialogue,” he said. “They only said they wanted to be treated like a serious dialogue partner.”

That's pretty damning for the USA. Do they have it in them to respect North Korea? I've heard that the USA have yet to recognize North Korea as a sovereign state and I doubt that Trump will be the president who breaks this American tradition.

Germans/Austrians. They're the experts at starting WWs