It’s easy to see why he won. He’s also eerily following the political playbook from the 1920s to get what he wants. If the media hates him so much, they need to a. stop reporting every little mistake he makes cause that makes them look petty, and b. examine his policy and how it negatively effects the people.

The Democrats also need to look at themselves and understand that doing what the Republicans did during the Obama admin will not work with them. They also need to be heavily pushing for better policy and show their willingness to work with southerners while providing alternatives to what Trump says.

long may he reign

Sorry, had to stop after 10 seconds. I don't watch videos that use random google pictures to support an argument.

I tend to overestimate the intelligence and political knowledge of the average person.

I votes for him. Despite him being a crazy, idiotic, psychopath I think I made the right choice. Three more years to find out though.

Oh I believe it. That video you posted is a good example of how white supremacists gain favor from the general public. They're lead to believe that white people are more victimized than minorities. Take this specific portion of the video for example: "Even though there are far more whites who are killed by the police every year." 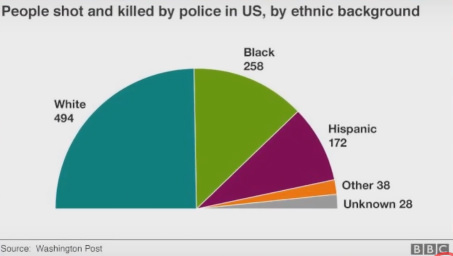 First of all, what that chart shows is not "far more" whites than the minorities. It's just about even, or slightly less. But even if you want to only compare it to another specific minority like "Black", the video creator deliberately leaves out two very obvious fallacies that he doesn't want you to think about.

1.) There are far more white people in USA than minorities: 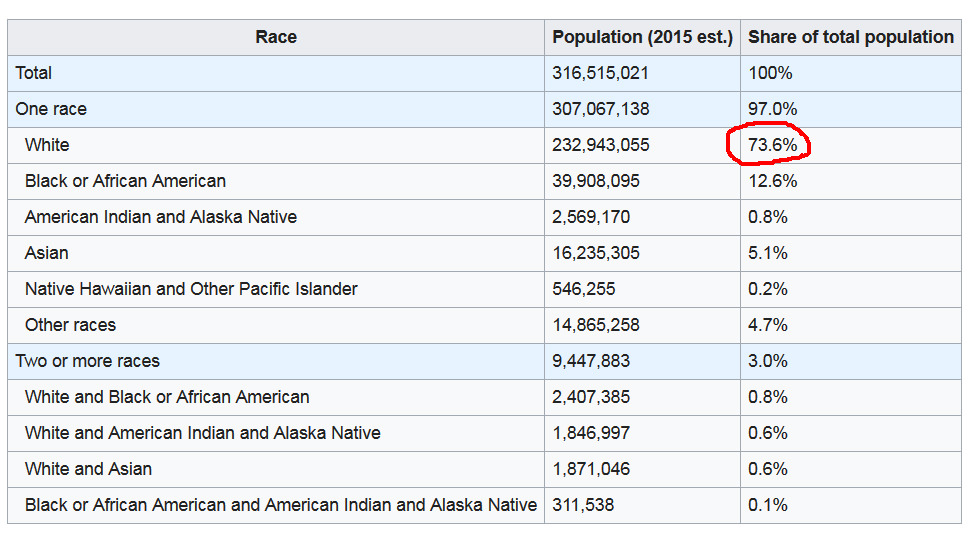 and so with an overwhelming majority, there's little surprise that more white people than any other specific group are being killed. However, the main point is:

2.) The police shootings of minorities that have been sensationalized by the media have generally been about cases where the minorities were murdered by the police (like the police officer who was sentenced to 20 years in prison for shooting a black man in the back and then planting a tazer on him https://www.nytimes.com/2017/12/07/us/michael-slager-sentence-walter-scott.html ), or cases where that is the suspicion.
The reason many of the white police killings aren't sensationalized is because they're not nearly as often executed while unarmed, with their hands on their head, etc.

These videos won't talk about these things. All they want is to scare people into buying into things like this other gem from the same video author:

I would like to tell everyone to please don't fall for this nonsense...
Yes, in some cases us white people get the shaft, but we are still far far better off than any minority group. We will be just fine.

But that leads me into my main point here. No, I'm not surprised that Trump won because the average voter isn't very knowledgeable about who or what they vote for, are easily impressionable, especially when the motivation is fear and victimization, and they don't fact check.
Many people who voted for Obama fall into this category as well. They vote for the wrong reasons.
It's easier to win by being dishonest and using fear mongering.

This 100%. Also part of how the immigration acts of 1917 and 1924 were passed. Fear mongering. As long as you scare the public you can get them to believe what you want them to believe.

Trump won because half of this country wanted to return to 1950. Coal and Christians.

Hit him on policy over and over, that is how to beat him in 2020. Ignore the daily nonsense of stuff he says on Twitter. Fight for something, rather than "not as bad as Trump".

Trump sounded good to many who felt lost in the statue quo, but running a campaign and promising things is very different from governing. He is beatable, especially in various states in the midwest he barely won to overcome popular deficit with an electoral victory.

Democrats need to be shouting over and over a bold policy position such as "Medicare for All" up and down ballots. People still don't know what the left stands for and these tantrums about "The Internet Freaking Out" over some juvenile celebrity or petty social aspect is not the way forward.

2016 was a harsh lesson not to take people for granted or feel entitled to office, you have to earn votes.