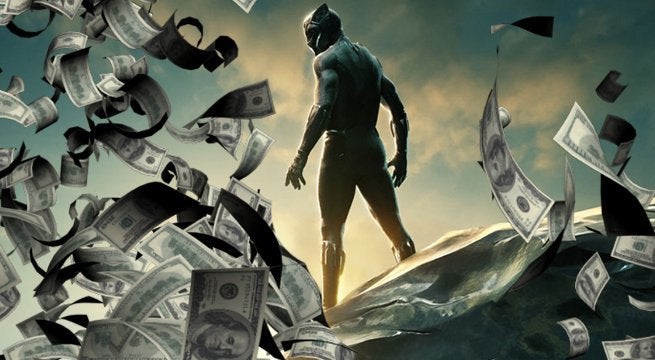 The estimates for Black Panther’s opening weekend have risen even higher as numbers from Sunday pour in.

Black Panther is estimated to have made $59.55 million on Sunday. That’s the second-highest Sunday box office total of all time behind the $60.5 million that Star Wars: The Force Awakens made on December 20, 2015.

Black Panther’s three-day box office total has now risen to $201-202 million. That’s still the fifth-highest opening of all time behind Marvel’s The Avengers, which made $207.4 million in 2012.

But that’s only if Black Panther stays on the high end of projections, and those projections are all over the place at the moment. Black Panther has already outdone previous expectations and that combined with the President’s Day holiday is making the numbers hard to guess. The lowest projections expect Black Panther to make at least $234 million over its first four days, which would still be enough to surpass Avengers and be neck-and-neck with Jurassic World.

Lets us know what you thought of Black Panther by giving the movie your owner personal ComicBook.com User Rating below.

I will add my own review in the future but suffice to say, I though it was done really well.

Between Wonder Woman and Black Panther perhaps the view of minority and woman leads will be shattered.

I remember when January and February and even March were dumping grounds for bad movies. Now, clearly, February is as viable as any other. Seriously, Marvel could release a movie every month and make 3/4 of a billion dollars.

I love that the movie is making people proud and empowered and more thoughtful about race. I only wish the actual film was better.

Well yes lol.  I think credit has to be given to the director and Disney for making it a great movie overall.  One thing I don't agree with are the assessments that the movie was a celebration of 'black culture'.  The reason I say this is because while the movie does do some VERY clever things with American black culture, this is more African culture.  I think that was one of the movies greatest strengths.  The heavy African culture I mean.   Black folks are as veried as the day is long and too often, we only see one aspect of it.  This was different and it works to great effect.   The criticism of the assessments I am making isn't literally but just a play on the words 'black culture'.  I am saying there are different forms.

I drew a weird parallel to the video game industry with your comment.  Its like how expectations were that big games would come out only in the holiday season, but now its obvious that they can drop whenever.  And seemingly as a rule, this is what Sony has been doing specifically.

i was it last night and it was fantastic. anybody who review bombed it for presenting a "black agenda" is just plain wrong. they used themes of African and African-American culture to humanize the hero and the villain respectively, but their actions were motivated more by their ideals than anything else. if anything it was the most tasteful way to handle the subject ever seen in a movie.

Well deserved. Such a great movie, most of it was great, except some of the CGI in the final part which I think looked a bit lacking.

The score, cultural themes, the actor, VFX, costumes, the supporting characters (specially Wakanda's lead scientist), the hero and the "villain". I really liked that T'Challa is such a balanced character that has no problem with showing emotion, and that the antagonist is really humanized, probably MCU's best villain by far.

To add some context, when tracking first kicked off projections in January, it was projected to have an impressive opening of 100-120 million for the opening. This is for NA showings too by the way. The movie cost an estimated 200 million to make. So now, having topped that as of Sunday, this movie is quite literally smashing expectations. I think this will end up boosting the Avengers as well. So expect Disney to walk away with 2018 easily.

It seems like every Marvel movie is a success these days.