THQ Nordic has entered into an agreement to acquire Koch Media GmbH, including, inter alia, the games developer and publisher Deep Silver with AAA-intellectual property rights such as Saints Row, Dead Island and exclusive licence for Metro.

NOT FOR RELEASE, PUBLICATION OR DISTRIBUTION IN WHOLE OR IN PART, DIRECTLY OR INDIRECTLY, IN THE UNITED STATES, AUSTRALIA, CANADA, NEW ZEALAND, HONG KONG, JAPAN, SOUTH AFRICA OR ANY OTHER JURISDICTION WHERE SUCH RELEASE, PUBLICATION OR DISTRIBUTION WOULD BE UNLAWFUL OR WOULD REQUIRE REGISTRATION OR ANY OTHER MEASURES.-THQ Nordic AB (”THQ Nordic” or the “Company”) has, through its wholly owned subsidiary, SALEM einhundertste Holding GmbH, today entered into an agreement with the owner, Koch Media Holding GmbH (the “Seller”), of Koch Media GmbH (“Koch Media”) to acquire 100 percent of the share capital in Koch Media. The total consideration amounts to EUR 121 million on a cash and debt free basis (the “Transaction”).Koch Media is a leading, independent producer and marketer of digital entertainment products in Europe and North America with studios in Germany, the UK, and the US, and offices in several Central and Northern European cities. Koch Media’s business consists of three business areas; i) Games, which are mainly published under the Deep Silver label with several AAA-intellectual property rights such as Saints Row, Dead Island and Metro; ii) Partner Publishing, which is the leading company in this business area in Europe and iii) Film, which is a business within movies for primarily the German and Italian speaking territories. Koch Media generated net sales of approximately SEK 2,548 million and Adjusted EBIT[1] of approximately SEK 296 million for the period April - December 2017.The new group generated pro forma net sales and Adjusted EBIT for the period April - December 2017 of SEK 2,933 million and SEK 505 million, respectively. 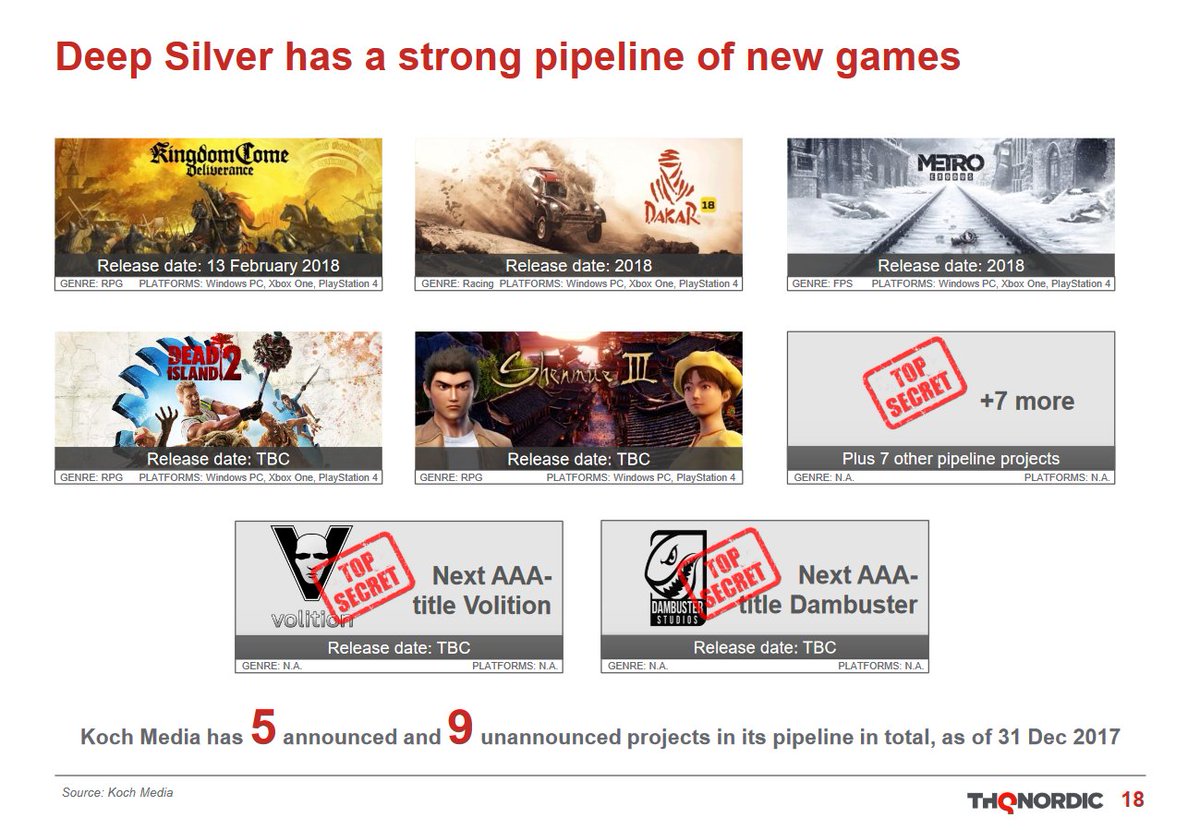 Well that sucks. Deep Silver were at least a different name in the industry and they made some good stuff too. Now it's going back to being all homogenised with just a few really big AAA publishers and nothing else

I hope Dead Island 2 makes 2018, Sumo has been working on it for nearly 2 years now, and that's in addition to the 3 years of development from Yager (assuming that Sumo reused some of Yager's work when they took over).

Shouldn't have any effect on the partnership with Sega/Atlus, so this is fine.

I think my faith in Deep Silver has just being raised now since they might actually get some projects done ...

I'm just interested to see what that new Volition game will be... wonder if they'll do another Saint's Row, have a crack at a sequel to Agents of Mayhem and improve everything that was wrong in it... or just a new IP altogether? The safest bet would be Saint's Row V, lots of people want it!

Good to see THQN picking up the scattered pieces of the old YHQ, rather than some other publisher picking them up.