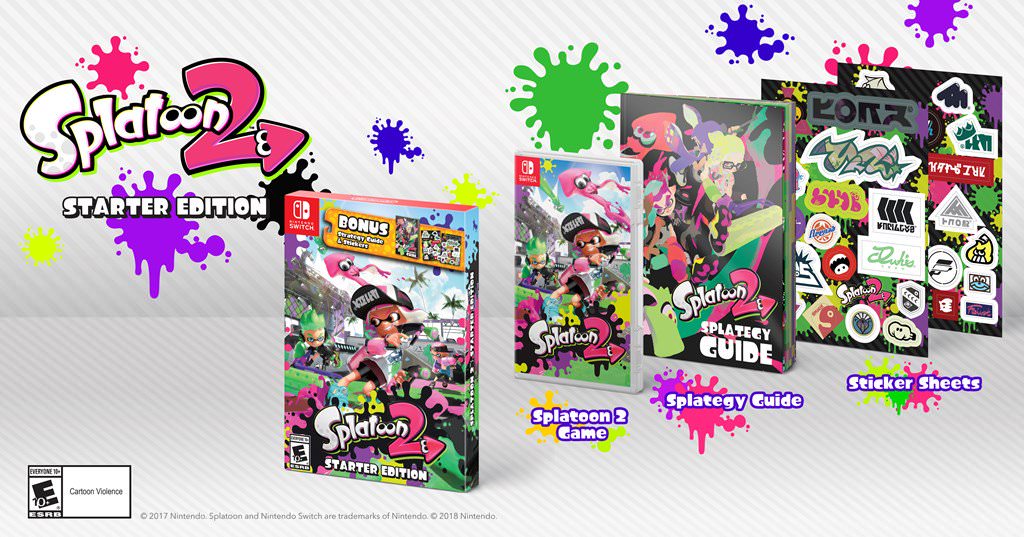 "Fans who don’t yet own the Splatoon 2 game are in for a splat-acular treat. On March 16, the Splatoon 2 Starter Edition will launch in stores. The special bundle of the hit Nintendo Switch game includes the full game, a 100-page Splatoon 2 strategy guide to equip you with skills to climb the competitive ranks and two sheets of Splatoon stickers, all at a suggested retail price of only $59.99. That’s the same price as the stand-alone game, so this new Starter Edition adds even more value.

Splatoon 2 launched exclusively for Nintendo Switch last summer and, so far, has sold more than 4.9 million units worldwide. The action-filled game pits teams of Inklings against each other in a variety of fun and messy modes. Since launch, Nintendo has consistently rolled out new content for the game, including recurring fan-favorite competitions called Splatfests, a new battle mode, as well as new gear and stages, like the just-announced Dark Tetra Dualies weapon and basketball-arena-themed Goby Arena stage.

In addition to this amaz-ink news, Pearl and Marina, two of the most popular new characters in Splatoon 2, are getting their own amiibo figures. This talented duo forms the group “Off the Hook,” and has been burning up the Inkling music charts. Fans love them for their unique futuristic sound, but they’re also making quite the name for themselves as the broadcasters of Inkopolis News and Splatfest events! The amiibo figures will launch in stores exclusively as part of a 2-pack set later this year."

I'm glad I waited!! This makes the game more tempting.

Think I'll pass on this anyhow as I own the core game already.

Well that was... random. I thought they would wait for the online service to be launched to start re-releasing multiplayer titles with extra goodies.

Nintendo is Learning! this way similar to Zelda BOTW explorer edition. they can keep price up but adding bonus to it.

thougt the strategy guide was a steelbook when I first looked at the the picture. A steelbook with that design would have been really awesome

I probably going to pick it up once it gets a prie promotion. Dont really care for the stickers or the online multiplayer. More of a single player couch co-op guy here. But untill then there are plenty of games I have in the backlog even for my Switch.

Nintendo has never needed a reason to keep the prices up on their games though lol... it takes them ages to drop prices.

This does make it look a bit more reasonable though.

Wonder what the Strategy book contains