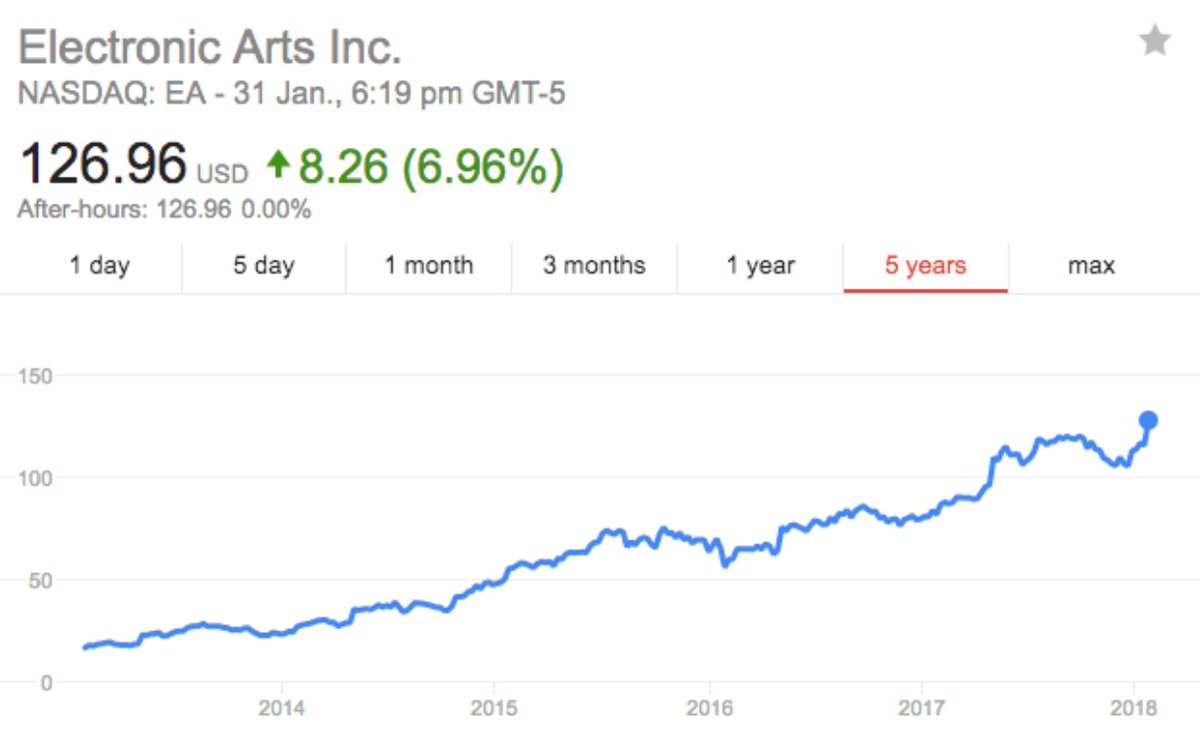 Electronic Arts may be disappointed with the sales of Star Wars Battlefront II, but its investors remain optimistic about the company's fortunes.

Publisher's stock price reached an all-time high yesterday following the release of its most recent financial results. It rose by just under seven per cent (6.96 per cent to be exact) over the course of the day, which is equal to $8.26 per share.

The surge was triggered by EA's latest financial results, in which revenues for the third quarter came in at $1.16bn. The company forecast revenues of $5.1bn by the end of the financial year, with profits of $1.015bn.

It is also believed that the publisher's announcement that loot boxes and microtransactions will soon be reintroduced to Star Wars Battlefront II. While the game's sales fell short of expectations at just 7m copies, investors remain optimistic about the potential for long-term revenue from the game.

The monetisation model for Battlefront II was dropped just 24 hours before launch following consumer backlash over how a beta version of the loot box system hindered progression. Prior to this, EA had been confident it would form a long-running revenue stream.

Other causes for investor excitement may have included the announcement of a new Battlefield game for October, and the ongoing success of its annual sports franchises such as FIFA and Madden.

Electronic Arts posted a total loss of $186 for the quarter, although $176 of this was a tax expense centred around the recent introduction of the Tax Cuts and Jobs Act.

lol They even make money on being evil. We gamers don't have a chance anymore.

That's investors for ye. And you know what, who blames em! Idiots keep buying the games! 7 million!

Good for them. That will teach people not to arbitrarily single out specific publishers when the problem has been around for a long time and is actually widespread. There's no point to rebel when you're only rebelling against people's favorite punching bag.

People have accepted the existence of lootboxes already for cosmetic items and soon they'll except them for pay-to-win when the next worse thing comes around.

What other game gives you an advantage with loot boxes?

Rainbow Six Siege is a pretty egregious example, which sucks because I honestly don't have a problem with Ubisoft as a dev(I'd actually argue they're underrated, but then again I haven't played 99% of their ips).

Get this - in Rainbow Six Siege you have to buy a season pass EVERY year for the new content. Your only other option is to keep playing for credits, which is better than just locking the characters outright but .... i've never unlocked a new DLC character as they take a long time. Apparently there was also some recent  controversy, they upped the price of the base game for no apparent reason and did something else that I can't remember .... but in general now that I've gotten better at the game it's become one of my favorites this gen, so I'm actually pretty saddened that just as i'm getting into it it's paywall gets worse.

But how would Youtubers survive without having an obvious punching bag? How can they make quality content without aiming for usual suspects? How can the internet have an honest discussion around pricing issues without naming the same two companies? I don't think you thought this through Vivister - if you'd like i'm willing to give you time to edit your comment.

That's not the point. The point is that publishers already crossed the line with cosmetic lootboxes against real world money. And the fact that people are fine with that is proof of their success of bringing gambling into gaming. Pay to Win lootboxes were only the next logical step. And I am fairly certain that they will very soon become common place and will have people defending it like there are people right now who defend cosmetic lootboxes and DLC.

Remember when DLC, microtransactions and preorder bonuses were bad words? Nobody gives a shit about those anymore because we now have things far worse that are creeping their way into people's minds.