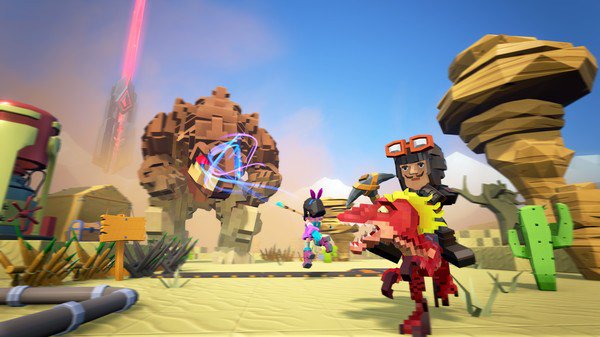 Snail Games has announced PixARK, an open-world voxel-based sandbox survival game set in the world of ARK: Survival Evolved due out both physically and digitally for PlayStation 4, Xbox One, Switch, and PC in 2018. Prior to that, PixARK will launch in Xbox Game Preview and Steam Early Access in March.

“With PixARK, we’ve taken the action and excitement that older players know and love in ARK to a new direction in order to introduce that world to an entirely different audience,” said Peter Kang, director of live operations and business development, Snail Games. “PixARK is a fun, colorful game that introduces players of all ages to ARK while adding creative building modes and a clever pick-up-and-play experience.”

Here is an overview of the game, via Snail Games:

In PixARK, a group of players wake up on a mysterious island, only to find themselves stranded. To survive, they must hunt, harvest, craft items, grow crops and build shelters to protect themselves from dinosaurs, natural hazards and potentially hostile human players. Using skills and the natural resources around them, players must tame or kill vicious creatures and learn to travel between worlds to uncover the mysteries that surround them.

PixARK is an open world voxel-based sandbox survival game bringing a new take on the world of ARK: Survival Evolved. The game will feature:

The ability to collect and craft items and build bases

Over 100 dinosaurs and other creatures to tame, train and ride

Procedurally generated worlds, with no two worlds ever being the same

Creative Mode which allows players to construct whatever they can imagine

More than eight unique biomes to explore, including deserts, jungles, caves and more

Watch the announcement trailer below.

Looks more like Dragon Quest builders.... only this is focused on party based gameplay.
A knight, healer, Mage, melee ect.

It is literally what this is.

How about they finish their crappy first game first?!

It was though. They've still been releasing more content for it after they elft early access. The same is likely to happen with the Subnautica team as well.

With a name like that surely it's open to a suit?