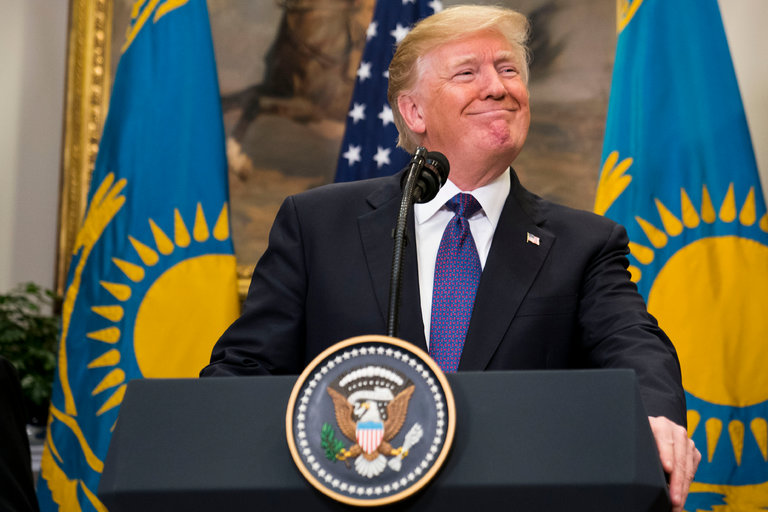 President Trump’s White House physician said Tuesday that the president received a perfect score on a cognitive test designed to screen for neurological impairment, which the military doctor said was evidence that Mr. Trump does not suffer from mental issues that prevent him from functioning in office.

“I’ve found no reason whatsoever to think the president has any issues whatsoever with his thought processes,” Dr. Ronny L. Jackson, a rear admiral in the Navy and the White House physician, told reporters on Tuesday.

But he did say that Mr. Trump’s weight is 239 pounds and that he is too sedentary. His cholesterol is too high, despite medicine to lower it, and Dr. Jackson said Mr. Trump would be increasing the 10-milligram dosage of Crestor to better control it.

At 6 feet 3 inches tall, Mr. Trump has a body mass index of 29.9, which is just shy of officially being obese. A New York driver’s license issued in 2012 listed him as 6 feet 2 inches tall, which would put him just into the obese category.

“The president, he and I talked,” Dr. Jackson said. “He would like to lose 10 to 15 pounds. We talked about diet and exercise a lot. He’s more enthusiastic about the diet part than the exercise part, but we’re going to do both.”

Dr. Jackson said that despite expressions of concern, a cognitive test was not indicated for Mr. Trump and he had not planned to conduct one at the Walter Reed National Military Medical Center in Bethesda, Md., where the president underwent his annual physical on Friday.

“This has been the narrative for a while. He saw doing the physical as an opportunity to put some of that to rest,” Dr. Jackson said during a nearly hourlong question-and-answer session in the White House briefing room. “He actively asked me to include that in it, so we did.”

He said that Mr. Trump received a score of 30 out of 30 on the Montreal Cognitive Assessment, a well-known test regularly used at Walter Reed and other hospitals.

The test is described as a “rapid-screening instrument for mild cognitive dysfunction” that focuses on “attention and concentration, executive functions, memory, language” and other mental skills. It asks patients to repeat a list of spoken words, identify pictures of animals like a lion or a camel, draw a cube or draw a clock face set to a particular time.

In response to speculation on television and elsewhere that the president has mental health problems, Dr. Jackson said, “In my opinion, that’s just tabloid psychiatry.”

Dr. Jackson said the president did “exceedingly well” on the screening test, adding evidence to the doctor’s own assessment that the president has been “very sharp” during numerous interactions he has had with him during the past year.

He said the president sleeps only four to five hours a night, but he said he was not concerned about it. He said he rarely sees the president overly stressed, saying that Mr. Trump “has a unique ability to just get up in the morning and just reset. He gets up and he just starts a new day.”

Asked about reports that Mr. Trump watches numerous hours of television each day, Dr. Jackson said that, as far as he was concerned, “He can watch as much TV as he wants.”

But he repeatedly expressed concern about the president’s sedentary lifestyle, noting that Mr. Trump does not have a “dedicated, defined exercise program.”

Still, he said that the president has “a lot of energy and a lot of stamina,” and he said he is asking for a nutritionist to consult with the White House chefs to cut calories and fat in dishes served to the president. But he said the president remains healthy.

Overall, Dr. Jackson repeatedly said he was impressed by the president’s health, saying tests revealed no evidence of cancer, lung problems, diabetes or joint problems. Tests of the liver, kidney and thyroid were all normal.

“It’s called genetics,” Dr. Jackson said. “I told the president if he had eaten healthier over the last 25 years, he might live to be 200."

So what? Kim Jong-Un could drive a car when he was three years old. His made up achievements are clearly superior.

Perfect reply. Did anyone expect something different?! Now on to the psychologist.

Trumps' health has never been my source of concern for Trumps ability as a president. The only times I hear it being brought up is when Trump or someone close to hum reassure us that his health is not a problem, like during the prelims when his (previous?) physician said he "Will be the healthiest individual ever elected president".

A lack of foresight and view for the long-term global developments are a bigger problem to me.

Besides, it's a test meant to screen for age related dementia and alzheimer's... Here's the specific test he took. The whole "mental stability" debacle isn't going to help anyone. If Trump's opponents want to really oppose him, focus all attention on his policy's. This is just weaking their own position.

They should test him on narcissism.

One of his three redeeming qualities was, like, to be very healthy. And impressively healthy at that.

Personally fan of the new movement for this. I find "the girther" movement hilarious.

So his height and weight are exactly at the point where he is what.. 0.1 away from being obese?

With that in mind go look up various pictures. Like the ones of him standing next to Obama (6'1) or famous athletes (Colin Kaepernick).

Lets see, he lied about his first doctors note. The white house spelled the doctors name wrong (and the abbreviation) in the second. And hey look lying about his weight and height in the third one. - Not shocked.

impressive guy, has a very tall manly stature... i didn't even realise he was 6 foot 3

I see. So he is either plain dumb or he is playin the US americans?