Share.
Our hands-on preview after five hours with the game.

BY ALANAH PEARCE AND JAMES DUGGAN The “Survive” in the title of Metal Gear Survive is a lot more literal than the first glimpses of gameplay might’ve made it seem. This is, first and foremost, a survival game, with unforgiving thirst and hunger systems that deplete by the second. On the other hand, the “Metal Gear” part of the title is much less literal. This is an action-first, crafting-driven adventure that, based on our three hours of hands-on time, has almost nothing but environments in common with previous games in the series, for better or for worse.

We dropped into the game’s seemingly expansive open world right after a series of somewhat uninspiring story cutscenes, and were immediately introduced to Survive’s version of Mother Base. It’s a fairly bleak but customizable base setup that initially has stations for crafting gear, weapons, and medicine, plus a fireplace for cooking raw meat so it becomes edible. There’s also a station specifically dedicated to leveling up, and all of these are explained by two off-screen robots that speak infuriatingly slowly.

The systems aren’t hard to understand and the tutorial is ultimately helpful, but this was my first major “Why is this called Metal Gear?” moment. In a franchise that’s known for having interesting characters and companions, why have two dull, humourless robots speak to me over an intercom rather than human NPCs I could form an attachment to? In fact, the only other actual character present during my playthrough was seated in my base, but couldn’t be interacted with in any way. The sole driving force of the game, at least at the beginning, is robots you don’t care about telling you to find data to bring back to your camp to analyse, while the hunger and thirst meters slowly tick away.

This was my first major “Why is this called Metal Gear?” moment.

Managing your food and water in Metal Gear Survive, at least initially, is little more than tedious. Your unforgiving metabolism mandates a “hunting” side mission in between almost every activity in the early game. While water replenishes your maximum stamina, I found no way to reliably craft clean water, instead just hoping to come across it randomly in the open world. Dirty water, which was much easier to find, inflicted an annoying status effect that could either be cured with consumable medicine in the pause menu (which doesn’t pause the game) or ignored at the cost of the occasional barf. None of this is fun, and while I’m sure you’ll progress past these petty trifles later, I question their prevalence all the same. 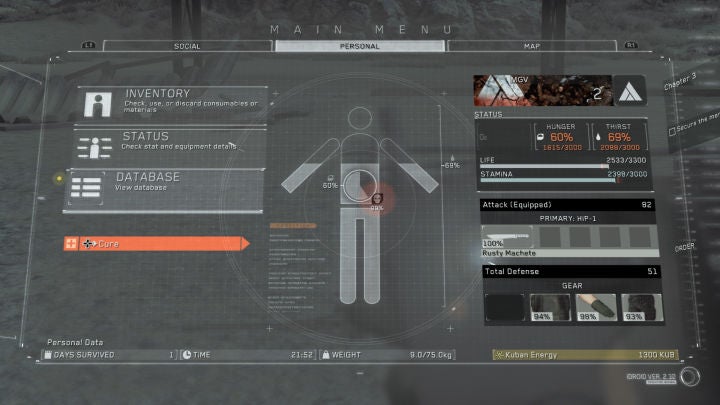 The resource management is pretty consistently unforgiving overall, too, with my progress being immediately halted at one point because I couldn’t find the stainless steel I needed to make a gas mask. I retraced my steps, explored seemingly every part of the map that I could without needing said gas mask, and couldn’t find the steel. Every step I took was depleting the resources I needed to survive, with seemingly no means of progression. In the meantime, though, I was farming the game’s Kuban Crystals – red crystals that can be found in the environment, but are also embedded in the heads of the zombie-style enemies.

Kuban Crystals are the currency you spend to level up, and, at least initially, it was so easy to farm that it didn’t feel particularly impactful. Enemies respawn and are easy to kill by just standing on something slightly higher than they are and stabbing at them. When they die, you essentially ‘rip’ crystals out of them. This is a bit of a slow process, especially since there’s no ‘take all’ option for any kind of resource in Survive, and I had essentially found an easy exploit within the first hour of the game, but the upgrade system had a fair amount of depth. 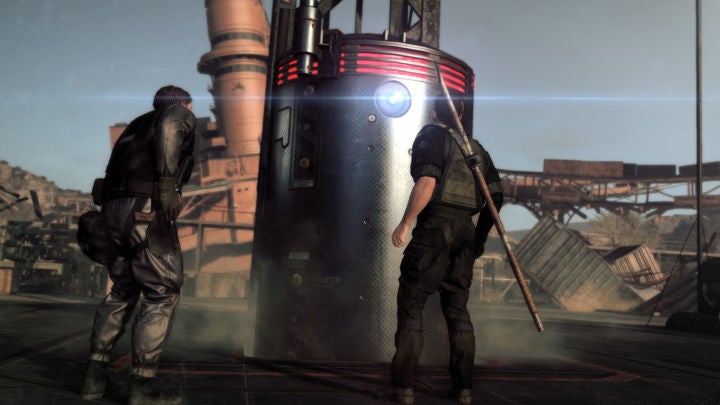 Crafting and progression were some of my most positive takeaways from Metal Gear Survive. Finding weapon blueprints stashed in locked containers is a lot of fun. I made an immediate b-line whenever I spotted one of these massive safes, each boasting a tense and rewarding minigame. Discovering a bow and arrow recipe, for example, is a remarkable boon more than worthy of the risks involved, and I wonder what other blueprints lie

Read more and see a video at the link below....

They'd make more money from the dlc part 3 of mgsV than this shit.

That's how I call every Kojima game ever =P

Can't wait for it to come out.

From what I've heard, it's actually a pretty good game.

This game seems a lot better than I first thought. I am really liking the motherbase and surviving stuff and graphics look pretty good as well.

Played the beta and didnt enjoy it.