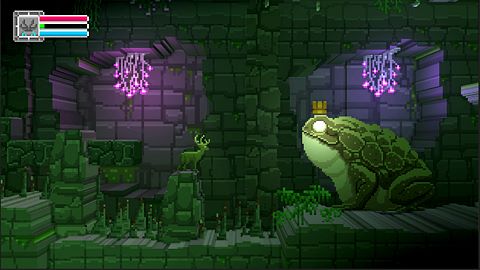 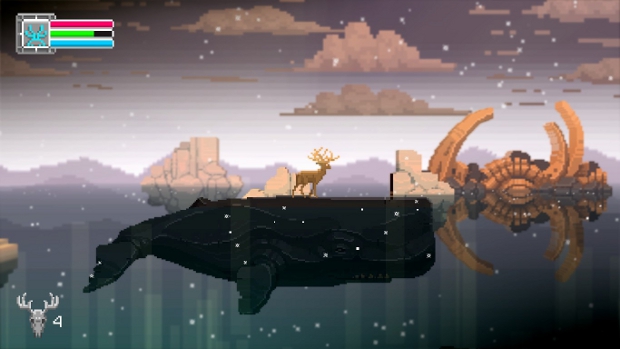 Deer God opens with 2 hunters about to call it night when one of them decides that he's not quite ready. He spots a deer and figures just one more kill before bed. Before he is able to take the shot he is apparently killed wolves, but awakens to a Deer God/elder/ spirit of the forest. He is told that he will spend his next life as a deer to atone for his treatment of the forest and if he wishes to return to human he must complete a series of good deeds. You are then dropped right into the game. And what a strange game it is.

Deer God is a platform/adventure game that gives off strong vibes of Ecco the Dolphin. Ecco the Dolphin with a land mammal instead. Your job is simply to run through a series zones looking for those in need of help. You do what they ask you to do ,and what they ask you to do is pretty mundane stuff, then you move on to the next. Where the game gets unique is that each zone is randomly generated with each representing a different biome (forest,jungle,swap, ext). Lets say you get quest in zone C that requires you to be in zone E to finish it. You continue moving forward (never a reason to go back as everything loops on itself eventually) to you reach your destination. This can be really bad or really cool depending on how you feel about luck being a factor in progression.:

That Mission can be this:

Yea. Each of zone is filled with its own environmental obstacles to traverse and enemies. Combat again reminded me of Ecco the Dolphin. You start off with a weak charge attack that gets upgraded twice over the game. This means until you get the proper upgrade certain enemies should be avoided. 8 optional power ups can be found hidden throughout the zones  by solving block puzzles near deer statues that help with combat effectiveness, but you have to find them. I beat the game and I'm still missing 4. These and the charge attack are controlled by a stamina meter, another reason to avoid stronger enemies till later as you will lose the war of attrition. There is also a huger meter that you have to keep track of. Speaking of enemies and optional; there are a variety of boss enemies you can stumble upon through your journey. these help quell that need for more interesting combat chances. If you happen to die you will be return to life right on the spot assuming you have at least one deer token which can be found all over the place. If you don't have one you will be reborn as a baby deer. As a baby all your attributes drop and you must use experience gathered from enemies to grow back to an adult dear. I think 5 stages total. Oh! If you kill to many good creatures on the map you may be reborn as one of those and they generally don't have the versatility  of deer.

With so many cool elements, I'm surprised by how boring it can get sometimes. The same kind of boredom you get when doing to many quest at a time in a open world RPG, but you know what helps? The presentation. This is a very good looking game.

Game uses a combination of 3D modeling and sprites and blends them together seamlessly. Parallax scrolling is used liberally, sometimes up to 7 different layers. Other neat effects like lighting changes as the time of day and weather effects really makes it a pleasure to look at. Music is very atmospheric, almost sounds like Team ICO games, but unlike those it ends up being unmemorable once you turn the game off. Not bad at all though.

I like Deer God. I like it so much that I hope a sequel or spiritual successor happens. Lots of cool ideas; they just need spruce it up a little bit. Outside of the boring issue other technical issues are present, the most obnoxious being the load time every time game is booted up. I get it loads everything for that seamless effect but that load time is 3-4 minutes! Other things include getting stuck or falling through terrain.