PlayStation 4 sold 5.9 million units worldwide during the 2017 holiday season, which Sony Interactive Entertainment defined as from November 20 to December 31, the company announced.

Here are the key points, via Sony:

“Thanks to the continued support from our fans across the globe, we are honored to announce remarkable sales during the holiday season,” said John Kodera, President and CEO of Sony Interactive Entertainment in a press release. “PlayStation Network continues to demonstrate spectacular growth, with the number of PlayStation Plus subscribers surpassing 31.5 million, and PS Store recording its largest-ever monthly sales of content in December 2017.”

Kodera continued, “I would like to express my deepest gratitude to our community and our partners for helping us achieve such phenomenal milestones. We promise our unwavering commitment to bring more amazing experiences to our fans, including exclusive games and innovative network services, as PS4 continues to flourish as the best place to play.”

PlayStation 4 is currently available in 127 countries and regions worldwide.

That's a lot of PS4 in six weeks. Congrats!!. But less than last year according to this tweet: 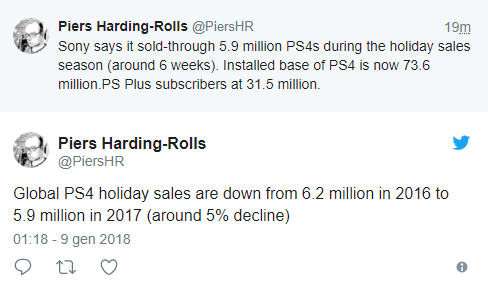