So every console generation has a major bottleneck, last generation it was the memory, this gen its the CPU limiting many games from achieving 60fps or causing framedrops in general.

I think Sony shouldnt just focus on getting a stronger CPU and GPU but also getting the PS3s Cell processor into the next PS5 along stronger hardware in general.

Despite what people say the Cell Processor was a beast for its time, if you look at exclusives like Uncharted 2 or the Last of Us, they look a generation above other games during their times. Or even way before that when some developers really tried you had Namco Releasing Ridge Racer 7 running on Native 1080p, while on Xbox the same game engine and with same tracks could only reach 720p in Ridge Racer 6, thats like twice the resolution on PS3.

And its not only fanboy talk in the system wars, the data proves that the Cell Broadband Engine running in 3.2Ghz is fact stronger the current PS4 jaguar CPU running at 1.6 Ghz, below some examples by developers 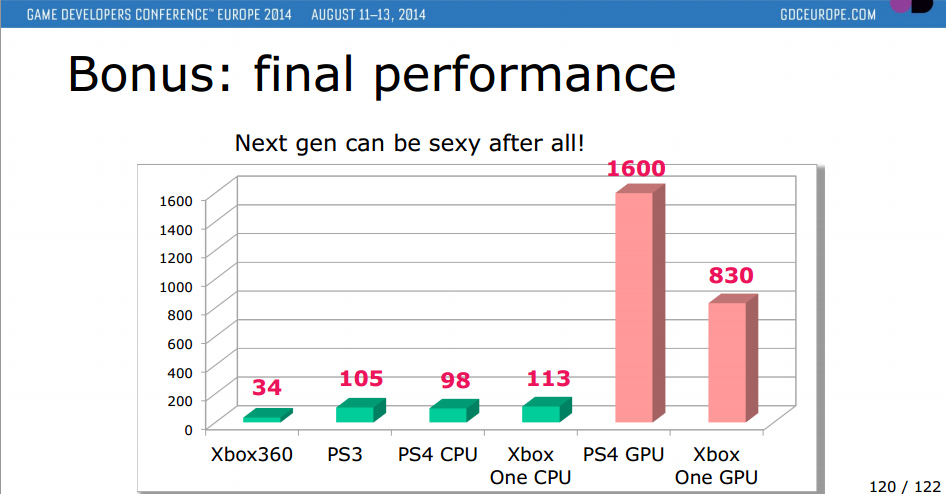 I think Sony should go for a CPU by AMD like the Ryzen but also with a Cell processor so it can be used for certain graphic effect or physics based effects to save performance on the CPU side. Especially annoying Alpha effect causing framerate drops and the likes of that. Yes the Cell is complicated as whole, but only if you try to run an entire game on it.

And keep in mind that on PS3 you had only 1 PPEs and 6 SPEs for devoloping games for, 1 other were used for the OS and another was scraped in order to save money on production. So on PS5 you could have 1 3.2 Ghz PPE core and 8 SPES for pure game development.

Sony owns the Cell processor, its already developed. Why shouldnt they just add it in to give the PS5 some extra power? A Cell processor and 256mb XDR DRAM combined have cost less than 50$ in 2009. The cost could be even lower today and it would give much more XDR DRAM which is the fastest ram on the market. And Sony is known for going unique architecture, even with the PS4 they added an extra ARM processor running parts of the OS in the background. I also dont think its good put all your eggs into one basket and let AMD decide everything.

Having a Cell processor and XDR DRAM inside the PS5 would give the console full BC for PS3 games. The PS3 GPU could easily be emulated or rendered by the PS5 graphicscard. So full PS4 and PS3 BC would be the result for PS5.

So looking at this i would aim PS5 to have

-An 8 core Ryzen CPU with over 3Ghz

- An AMD or Nvidia GPU with with over 11 Teraflops

I will only say this: No.

Have you read it? i dont think so

I have, and it’s idiotic.

OP must be kidding...or is, politely, a bit clueless.

If Sony wants to avoid CPU bottleneck they should simply use a better CPU. Its not a like the Jaguar was cutting edge tech in 2013. The reason a game like Uncharted 4 looks so good is because they focused on GPU power.

Uncharted 2 and Last of Us don't look a generation above. Games like Gears 3/Judgement and Halo 4 look comparable. While a game like GTAV was arguably the most impressive title of the generation. But all these games look great because of GPU, not CPU. Its GPU that pushes graphics.

Look at PS4 and X1, its obvious what separates these two is the GPU advantage of PS4. That allows PS4 to have better resolutions and/or better visual effects.

If your specs are what PS5 is aiming for at $499, a potentially $250-299 X1X is gonna look appealing. Same amount of RAM, less than double the GPU power (mostly resolution disparity), while the biggest disparity would be CPU.

I don't believe Sony cares about PS3 BC. If they did, they would do it by software so they can sell you the games again.

Interesting proposal.
But with that deep analysis of it, I dont think is all that easy, i mean, to combine the cell with any hardware. But if they do, they could achieve what most of us think impossible, full backward PS4-1 compatibility.
THat would be a win on my book.

You can't just lump two CPUs with completely different architectures together and expect them to work just fine. Ryzen is x86, Cell is PPC. If Sony wanted to use Cell again, they would have to go back to PPC and I don't think that will happen as PPC is pretty much dead when it comes to consumer hardware. It has been dead for quite a while now.

Also, The Cell hasn't evolved too much. IBM and Sony gave up on the thing so it is stuck in the past. Sure it does have some impressive features and it can run crazy fast in floating point operations. But that's about it. It lacks a modern architecture. It is less powerful than virtually all other hardware today in most use cases and it uses way more power. For the cell to be feasible for the Next-Gen Sony would have to invest billions in developing it further. Which just won't happen.

Don't get me wrong, I loved the cell. But its time has passed. However, I see a real competitor for x86 in ARM. If ARM hardware keeps developing as fast as it did in the last years, it should be able to keep up very well against the big boys from Intel and AMD while using way less power. But I don't think we will be quite there with the PS5. I'm pretty certain though that we will not see a PS6 with x86, if we will see a PS6 at all.

And there you have it, the first rumour about the PS6! Only on vgchartz! =P