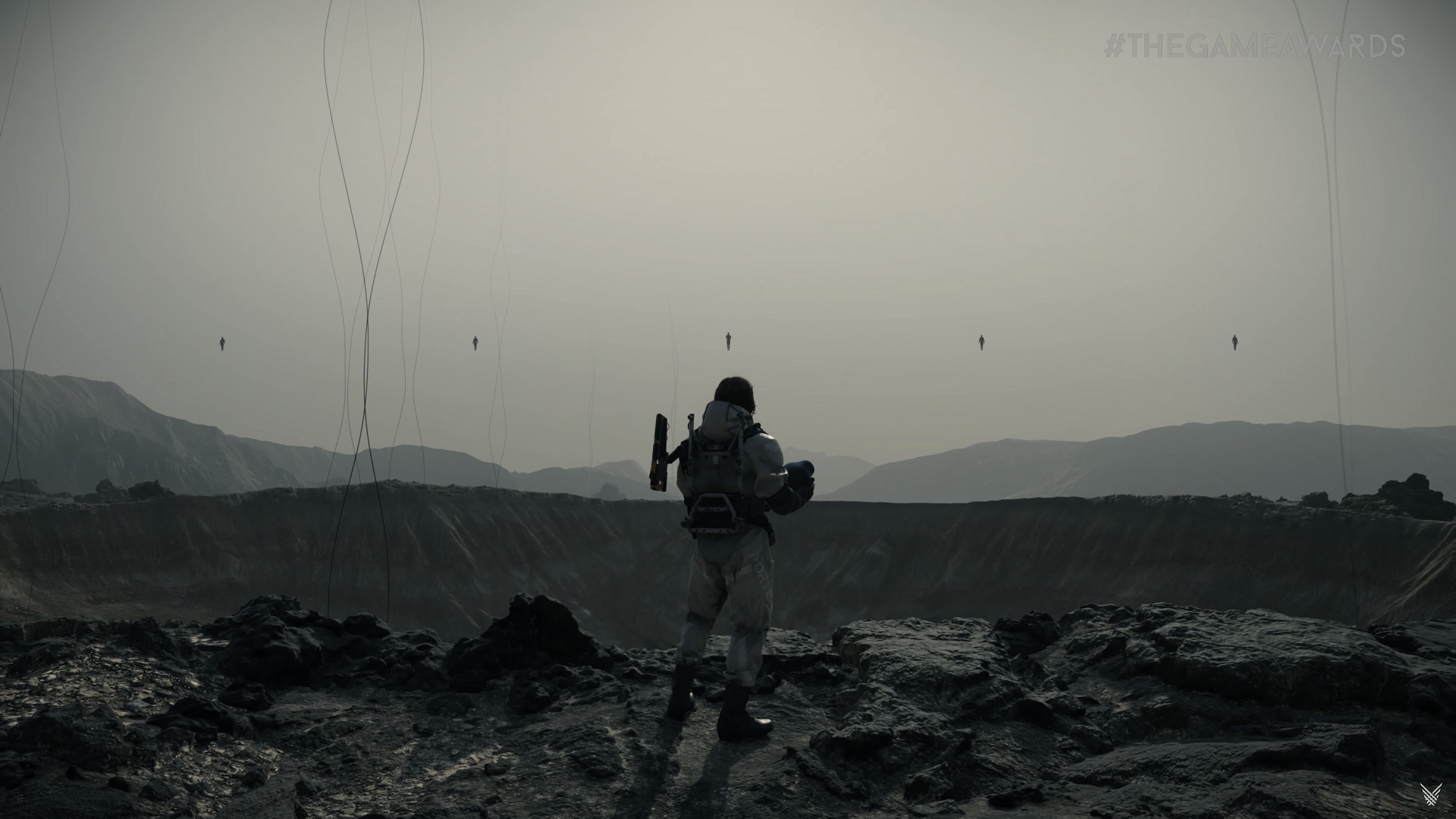 Here are all the interesting tidbits:

“One of the themes of this game is life and death,” Kojima said. “So I want people to realize that when they die in the game, that isn’t the end.”

Partway through the latest trailer, Sam (played by Norman Reedus) watches as an explosion engulfs a giant. From there, he awakens in a world submerged in water. According to Kojima, this is where players are transported each time they die. It can be freely explored in first-person, because of a “unique” ability possessed by Sam, which enables him to wander outside of his body and recover items, among other things. “At that point, you’re not dead or alive,” Kojima said. “It’s the equivalent of that screen that says ‘Continue?’ and a counter ticking down towards zero.”

When you are ready to return to the world of the living, you can get back in your body. But rather than set you back to a point before you die, you are transported back to the world after your death, where your actions maintain an aura of persistence. “So as you saw in the trailer, you saw the crater, and when you come back, it’s still there,” Kojima said. Most games would’ve taken you back to before the crater was made. So depending on the player, you might have a lot of craters all over the place — depends on each player.” He added, “Death will never pull you out of the game.”

The latest trailer featured rain that seemed to have to ability to manipulate time. It makes plants grow the second a droplet hits, and the human body age and deteriorate within seconds. This rain, which is not of this world, is called “Timefall, and is a central part of the game’s lore. Kojima teased, “Most people in the game are aware of the rain — and well, [Sam] is quite unique in this regard… I think I should stop there. I’m spilling the beans.” Kojima added that the recurring motif of Sam crying is “really only because he’s sad right now.”

The baby that washed upon the shore in the first trailer, transported into a tube in the second trailer, and appeared inside Sam’s esophagus in the third trailer was one and the same. “The baby relates to game mechanics as well as the story as a whole,” Kojima said.

The mounted robot arms attached to Sam and the other characters has a name, but Kojima would not share it. It seemed that they sparked to life whenever that person came into possession of the baby.

Regarding multiplayer, Kojima said, That’s also one big part of the game I can’t talk too much about, but I definitely want to try something different for online.” He did hint that it will be primarily a single-player game, however, adding, “I think there are a lot of people out there who still enjoy single-player games, aside from some microtransactions.”

Regarding whether the word “Porter” on Sam’s uniform is his last name or job, Kojima said, “There’s some truth to it, and there’s some part that isn’t necessarily true to it.”

The latest trailer occur shortly after the game’s prologue and is the earliest section of the game we have seen so far.

The SAG-AFTRA strike of 2017 delayed performance capture and voice-over work. Kojima explained, “I also had a hard time because I had Norman and Mads texting me asking what we were doing and I’d say ‘There’s a strike, there’s nothing I can do about it!’” With the strike having ended, full performance capture resumed last week.

“I’ve been reading a lot on the internet of people saying I’ve spent the last year just traveling around and having fun,” Kojima said.” A lot of people saying I’m wasting time and money. But that couldn’t be further from the truth.” He added, “We’re waiting for the right moment to show gameplay, but right now we’re on track with the project.”

Regarding development in 2017, Kojima said, “Over this past year, we’ve been working on Decima [the game engine]. There are things we don’t know, we ask them [engine creators Guerrilla Games], we make some requests. On our end, of course, we use the Decima engine very differently from the way they use it, especially when it comes to the cutscenes. So we make our own things there, and send it to them, show it to them, get their feedback. We are at that pace, currently.”

Regarding extreme reactions from fans upset at the long wait between new information reveals, Kojima said, “There’s been a lot of stuff going on through this time, so it makes me pretty sad when people say ‘Oh, you’re just having fun and joking around and wasting money.’ You could ask so many people, but I really think that I’m doing this pretty fast. If you have a company, if you already have an engine, you already have the tools and the team together, and even then, it’s pretty standard for a AAA game to take three to five years to develop their games. For some games, it can take up to 10 years.”

If the trailers are still confusing, Kojima assures, “Everything makes sense. Everything will come together.”

Death Stranding is currently in development for PlayStation 4.

Tagging. The little bit I read about player death sounds like Soul Reaver or Prey. It'll be interesting to see how Kojima tackles that mechanic.

How on earth will players learn to adjust to this new reality after being taught for years and years that once you die, the game ends?

This has a gameplay?

Shouldn't gameplay be the focus before cinematics?

That's debatable. Everyone seems to have an opinion about there. There's definitely room for both cinematic and non-cinematic games though.

Are you serious? People have gotten used to games not ending when they die to the point where it had be reintroduced recently as a hip new feature called "Permadeath"