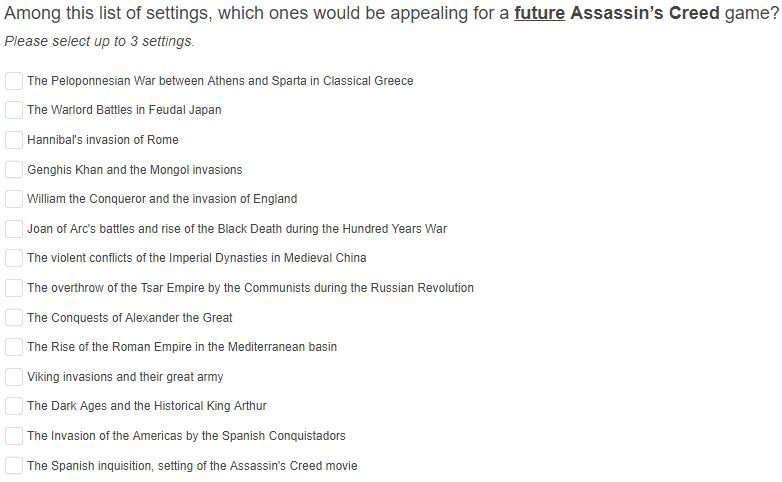 I'm glad Feudal Japan is still under consideration. I voted for Japan, China, and Russia personally, since you can only vote for 3.

Vikings would be interesting

They're really trying to gather to their fans taste ?


It ain't bad at all per say, but it would probably undermine the effect of surprise for anything that would come up ...

The is the 2nd time they've done this, they did another survey like this back in 2011 as I recall. Several of the settings from that first survey have now been used in main AC games (Victorian England, Egypt, Pirates), with the exceptions being Imperial China, Feudal Japan, Roman Empire, Russian Revolution, and Spanish Conquistadors, which are all still on this 2nd survey. Seems like Ubisoft would rather pick the settings their fans want the most, than to surprise fans with their setting choices.

To anyone who doesn't know it the history of Hannibal's invasion of Rome is SOOOOOOOO epic, you should really vote for it !

Either would boost the franchise in Japan, that's for sure.

Maybe they should go for the Zorro option.

I'd like to see some games set in pre-colombian America. Aztec, Inca and Maya civilisations are so unexplored in gaming. Same for the smaller (afaik) native American tribal cultures of current day US.

Doesn't have to be AC, just anything really. But I think there's a lot of potential.

Out of this list, King Arthur and William the Conqueror seem the most interesting. But even better would be a game about the Gallic Wars.