Some time ago we learned that Cuphead had sold over 1 million units across PC and Xbox One. But now, according to SteamSpy, Cuphead has reached 1 million untis on Steam alone.

Other than Steam, the game is also available at Windows Store, GOG, and Xbox Live. So, that means the sales must be way over 1 million by now. 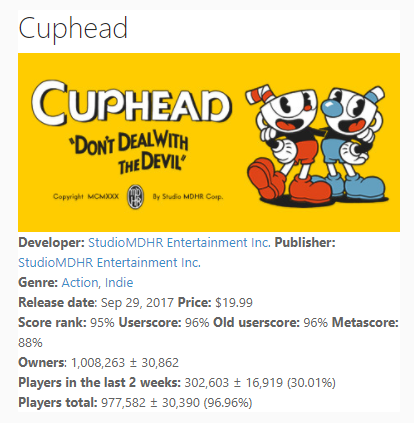 Good sales for the game so far. It seems to have garnered that audience that loves a challenging game.

(Got a laugh at the Dark Souls comparison)

The game is also available on GOG.

Would be nice if GoG had something like Steam spy, so we could then combine the sales of that storefront with Steam.

Thanks. I updated the thread.

Not bad! I'm most likely gonna' buy it at some point, on Steam of course since I don't own an XBO and it isn't coming to PS4... wonder if the success of the game will lead them to make sequels, or if it's just a one hit wonder.

Awesome! Love the art style for this one.

Great sales. When the 1 million milestone was announced, the steam version was at 575k. Taking this into account, the game has sold at least 1.425 million, and that if w10/Xbox sales completely halted.