I finished my first run through Nier: Automata this weekend, and it's one of the best games I've played this year. I love the physicality of it, the way character 2B pauses for a heartbeat and then lurches forward when I press the dash button. It's a perfect videogame movement. I love that the combat looks and feels satisfying, a whirlwind of intricately animated combos, swords appearing and disappearing like magic. It's more light show than fighting game, unlike Platinum's Bayonetta, but that doesn't matter. It looks amazing. I just wish that Nier: Automata on the PC wasn't still in need of a patch, eight months later.

When Andy reviewed Nier: Automata back in March, he wrote "cutscenes are locked to 30fps, which make them look distractingly jerky. The mouse cursor kept appearing in the centre of my screen. And on one test machine running an AMD card, the game crashed to a white screen every ten minutes for seemingly no reason. A game this interesting deserves a better port, frankly."

In June and July, Square Enix updated Nier's steam page, mentioning that new drivers from Nvidia and AMD should fix some white-screen issues. But that's been it for Automata's post-launch support, which is frankly lacking for a game that has sold more than half a million copies on PC alone.

Nier: Automata's issues aren't huge, but they are annoying. The first thing I noticed, within a few minutes of playing, was that my mouse cursor kept appearing in the middle of the screen, no matter how many times I scooted it off to the side. I was playing with a controller, and most games these days simply hide the mouse when they detect a controller in use. Nier doesn't, and seems to insist on re-centering the cursor constantly. Playing at my desk, this was a nuisance. When I tried to play the game on my TV on the other side of the house using Steam In-Home streaming, it was maddening.

As Andy pointed out, the cutscenes look oddly jerky, which is a baffling issue for a game with such beautiful animation, from a developer renowned for incredibly smooth action games. I also noticed that Nier was taxing my Nvidia 980 Ti graphics card harder than it should've, considering what was going on on-screen. So I went for the usual solution: I turned to the modding community.

Modder Kaldaien, like occasional PC Gamer contributor Durante, has made a name for himself fixing up and improving ports of Japanese games, like Tales of Berseria and Nier: Automata. Back in April, not long after Nier's launch, Kaldaien released a tool called FAR: Fix Automata Resolution. Other members of the modding scene also contributed to the project, and it's a seriously amazing tool. Just look at all these options. 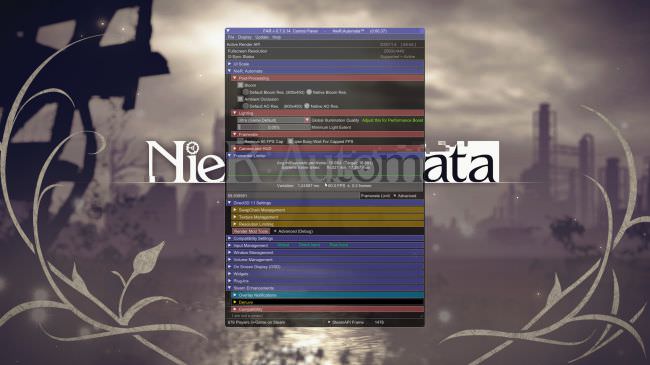 FAR can fix little annoyances for you, like hiding the mouse cursor. It adds borderless windowed support, a pretty standard mode that Nier was lacking. It improves the resolutions of bloom and ambient occlusion, which could look artifacted at their original resolutions. Those are all nice touches, but here's my favorite bit of engineering in FAR, as described in its Steam Community thread:

Thanks to the mod community, the PC version of Nier: Automata plays well. FAR is easy to install. It's also so complex, and so comprehensive, that it feels like functionality Square Enix and Platinum should've built into Nier: Automata themselves. This isn't some hacked-together fix.

In May, Kotaku wrote that it was ridiculous Nier: Automata hadn't been patched on PC. It's even more ridiculous now, six months later. I emailed Square Enix about my issues with the game, and asked if Platinum was still working on a patch. A request for comment was forwarded over to Japan a week ago, but hasn't resulted in an answer as of this writing.

Nier: Automata is still worth playing. It's one of the weirdest, most creative games you can play this year. Or hell, maybe ever. And with Steam sales and the likelihood of another Nier game arriving on PC in the future, people will be buying Automata for years to come. It's not too late for Square Enix and Platinum to make the PC version as good as it deserves to be.

I remember hearing of the game coming to PC, months before it released, but when it was released, I saw the bugs and issues that came with it and decided to stay away from purchasing it. Now 8 months on, I still don't feel like going for it, even if it is on sale for £23. I just don't see it being worth going through all that hassle, for a 2017 game that hasn't received a single patch since it's release. I've seen indie games in ea, even complete ones that receive patches weeks, months and even years onward. Nioh was released a few weeks back and even that managed to throw out a patch or two.

I know some people like to laud the game for what it delivers, but in 2017, I'm really not up for heavily modding a game, just to get it to play nice. Older games, sure, but hardly for brand new games, especially AAA.

Well it did sell pretty nicely on PC even without the patch since the modders basically fixed the game which is probably why they havn't done anything.

Which sets a rather bad example, because it means that they could release more titles in the future, with zero patches and simply expect modders to fix their mess.

AAA games are seen as the type of games that are meant to come out polished and working proper. Indie games I fully expect to come with some issues, but even then, we still have indie devs working hard to patch their own games, I don't see why AAA pubs/devs can't do the same.

And people say PC's are the best

Whatever happened to just buying a game, enjoying it and moving on. In its current state it's well worth playing.

It's one AAA games that hasn't retrieved a single patch?.

Japanese developers and publishers in general are still well behind the curve when it comes to PC releases. I really don't know why when it's obvious that there is money to be made on PC.

As for Platinum, they've become synonymous with this kind of thing.

The PS4/Pro versions also experience some framerate drops, though I think the PC version has issues that extend beyond just that.

I guess they just decided that they're going to make money anyway, so they didn't feel like putting the effort in to patch it.

And that's why I got a refund for the game and never bothered with it. Guess it was the best option to do so.