Alright, so, for everyone who didn't know it yet.

I predicted a total of 15 million Switch shipped by the end of 2017. (prediction made in January 13, after the Nintendo Switch presentation) Most people won't understand what i'm saying there, because is an italian thread, so in short: 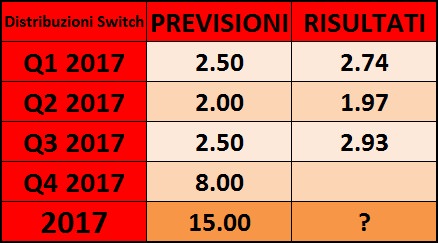 As you can see, i expected Switch at 7.00 million units shipped at this point.
Switch is at 7.63 million, which mean i underestimated Switch by 630,000 units.
Remember i made this prediction in JANUARY, before any Nintendo prediction, which was at first 12.74 million by end of March 2018, and now 16.74 million by March 2018.
Nintendo probabily expect Switch to sell close to my prediction by the end of the year, even if probabily they don't expect 15 million shipped in 2017 alone. Even so, i'm confident Nintendo will, again, surpass his expectation, and ship about 15 million by end of 2017, and reach 17/18 million by end of March 2018.
In any case, in the absolutely worst scenario, Switch is not gonna ship less than 14 million units this year, which mean that, my 15 million prediction will be, by far, the best prediction ever made for Switch first year, considering most people didn't expect the console to ship 10 million in January, and even after the strong Switch launch, most predictions were just in the 10 to 12 million range, while i always expected at least 15 million shipped (at one point even 16 million if i remember correctly).
As for software, at this point is super obvius that EVERYONE will destroy the 5 million mark. Splatoon already at 3.6 million, Mario Kart and Zelda are at 4.4 million and 4.7 million by end of September... and Odyssey launch looks MASSIVE.
Anyway, what do you think? What was/still is your Switch prediction? Also, did you thought 15 million was crazy back in January? Let me know.
Last edited by Ryng - on 30 October 2017

Rol would be proud.

Wow so far your prediction has been great, only 630k off is nothing compared to literally everyone else’s. Did you come back from the future?

Also, I think the absolute maximum this year would be 15.5 million or so, which would result from it selling ~ 8million in Q4. Mainly because I don’t see it selling as well as the 3ds did during that time because of remaining supply constraints in Japan and America.

Mine is still solid too!Predicted that Switch would go on to sell more than 100 million lifetime way back in November.So far, it still got a chance for that to happen!

Oh i thought this was a tbone51 thread!

Lets goooooo! You got this

To be honest, i think my 8 million prediction is a bit too extreme. 7/7.5 million is probabily more likely. But, since so far Switch has shipped 630,000 more than what i expected, overall shipments for the year should be super close. I just underestimated summer sales, and probabily overestimated holidays sales. We can expected Switch at 14 to 16 million shipped by end of the year, imo

what was your prediction in January?

While I expected Switch to sell more than 100m units lifetime, I was cautious about its first year with sell-through of 8m, so 9m shipped. I thought it would take more time for Switch to gain traction, but the market quickly embraced the system. Even in Europe which is commonly said to be a weak market for Nintendo (which I don't agree with), Switch is doing well on a consistent basis.